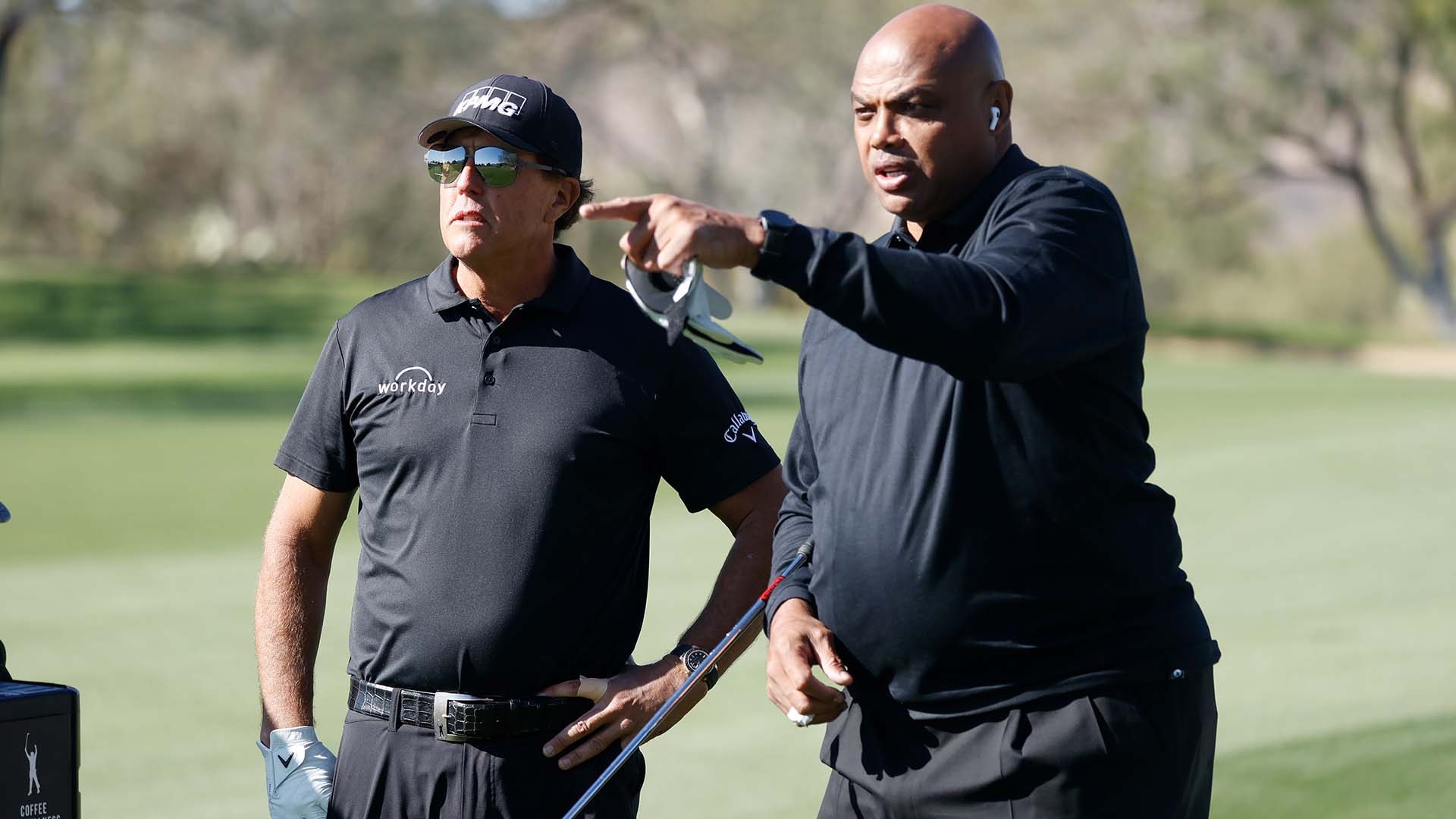 Score one for the underdogs!

Phil Mickelson and Charles Barkley entered the latest iteration of The Match, The Match III, as betting underdogs to favorites Stephen Curry and Peyton Manning. However, Mickelson and the 25-handicap Barkley got the job done in convincing fashion, winning 4 and 3 on Friday at Stone Canyon Club in Oro Valley, Arizona.

"Two people thought this was going to happen: you and me," Mickelson told Barkley as they walked off the 15th green.

After dropping the first hole, Mickelson and Barkley won four straight holes to take command. As Curry struggled with his game and Manning couldn't do much to pick up the slack, the two went 4 down after 10 holes. In total, they won just three holes.

While there were still plenty of Classic Chuck shots to make things entertaining, Mickelson performed well as a player, coach and caddie to headline a strong team performance.

Oh, and the banter wasn't "turrible," either.

Here are some of the most memorable moments from the day:

To: Chuck, From: Tiger

Barkley's golf ability and knack for self deprecation make him an easy target, so it's no surprise that Tiger Woods' needle found him.

Woods sent some gifts Barkley's way before the match, including a reflective vest and airhorn.

The joke, though, was mostly on Tiger. Barkley didn't need any of his presents early. He hit a nice baby draw off the first tee and didn't miss a fairway until the fifth hole. And while Barkley did hit some foul balls later, the match was well in hand by then.

Mickelson put on his caddie hat right away after bombing a drive into the left rough at the opening hole. As Barkley sized up a wedge shot, Mickelson shot the flag with his rangefinder.

Barkley clipped it a little thin, sending the ball well over the flag and rolling it onto the back fringe, some 80 feet away from the flag.

Mickelson then conceded that he over-clubbed Barkley on purpose.

“It was actually 55,” he said to Barkley. “I didn’t want to tell you that because I wanted you to be aggressive. … I’ve underestimated your ability.” 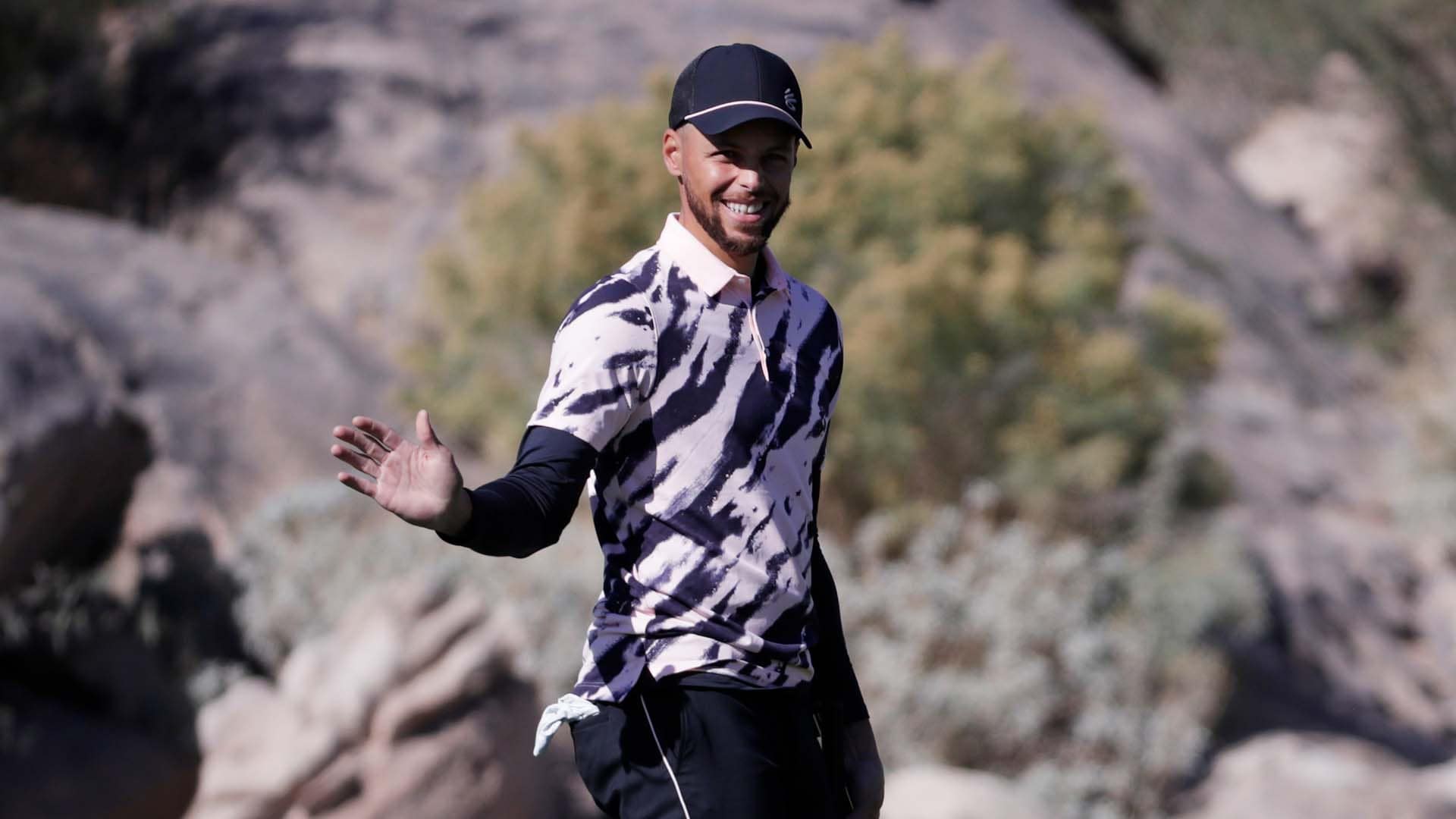 Pray for the zebras?

Steph Curry was easily the best dressed player on the course, and Phil Mickelson agreed: "I think he looks amazing.”

But Andre Iguodala, one of Curry's former Warriors teammates who was part of the broadcast team, disagreed.

"How many zebras had to die for you to look fly?" Iguodala quipped.

"Glad to see that Chuck has channeled his inner Black Knight with his all black attire today," Player said. "Let’s go Chuck & Phil."

Barkley then mentioned that he and Player teed it up recently.

"One of the highlights of my life was getting to meet Gary Player about six weeks ago," Barkley said. "I always wanted to meet him, we played a great round of golf and it was an honor and a privilege."

Unsurprisingly, Player made some comments about Barkley's weight during their round together.

"I'll tell you what, he made me feel bad about being fat, though," Barkley said. "He told me I need to get in the gym."

Tiger and Gary weren't the only ones making fun at Barkley's expense. Barkley's "NBA on TNT" colleagues – Ernie Johnson, Kenny Smith and Shaquille O'Neal – joined the telecast from their homes.

"I’m tired of your colleagues disrespecting you," he said before handing a dozen Callaway golf balls with Shaq's face logoed on them to Barkley.

Barkley's next shot from the drop zone missed the green, as well.

"Where’s the hitch?" Kenny Smith asked Barkley as he walked toward the green.

O'Neal then had the best zinger of them all as Barkley lined up a birdie putt off of Mickelson's tee shot.

"Chuck, if you can't read words how you gonna read greens?" O'Neal asked.

Mickelson's advice – "Quiet your mind, my friend" – paid off, though, as Barkley nestled one close to clinch the halve after Manning lipped out a short birdie try.

With Barkley facing a long birdie putt from the fringe at the fifth hole, Curry had a chance to chip he and Manning's fourth shot close and put some pressure on.

However, he duffed it.

With the ball still in the rough, Mickelson decided to conceded the bogey to his opponents.

"That’s a strong, cocky move right there," he said to Barkley, who ended up lagging one 4 feet past and setting up a Mickelson par make for the hole.

Who said the Super Bowl had the best commercials?

Here's the ball flight we're used to out of Chuck. Warning: It's not for the shank of heart.

After Barkley declared the match basically over with he and Mickelson leading 3 up at the turn, the pair went 4 up after 10 holes. But Curry and Manning managed to get one back at the par-4 11th hole as Mickelson and Barkley spent some quality time in the desert.

Nice out by Mickelson, even if Barkley would later miss a putt for double bogey.

As for Barkley's club toss? In Chuck's words: Turrible!

Not much went right for Curry and Manning on Friday.

Even this beauty of a bunker shot by Steph, at No. 12,  resulted in a lost hole.

Great shot, but Curry still might not want to check his Twitter for a while. Better to let the plus-1 handicap skepticism die down first.

And the winning putt...

Mickelson sealed the deal with this birdie make, but man, wouldn't it have been great if Barkley had drained the game-winner instead?