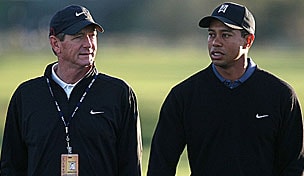 Perhaps there is an unspoken Hippocratic Oath between student and swing coach – something along the lines “do no harm nor dirty laundry” – but after wading through Hank Haney’s tome “The Big Miss” it seems that if the author is guilty of anything it is holding back during his six-year tenure as Tiger Woods’ swing coach.

Haney said the book, which was released on Tuesday, would offer a snapshot of his time with Woods and would not be a tell-all. By and large he followed the letter of that charter.

With startling frankness, Haney outlines a relationship that began awkwardly and ended with an anticlimactic thud at the 2010 Masters. It is at that last major together, the epicenter of Woods’ plummet from grace following the scandal of 2009, that Haney begins the book, describing Woods’ tie for fourth as, “my best job of short-term coaching ever.”

It is telling that even before Woods teed off for the final round at Augusta National Haney knew his relationship with the game’s alpha male was over and even allowed himself to fear for the worse.

“With the cold part of my mind that keeps any sadness momentarily walled off, I make the call. He’s become less of a golfer, and he’s never going to be the same again,” Haney wrote.

Some will likely scoff at that type of veiled arm-chair analysis, but it is nonetheless telling, like this passage that describes one of Haney’s first meetings with Woods, “. . . he was a little more innocent, a little less guarded, and a lot less cynical than he’d become.”

It’s also interesting to hear Haney’s extended take on the various swing-related issues he had with Woods, most notably the movement of his head to the right on the backswing, a sticking point which “would never get completely resolved.” As well as the lengths Woods went to protect his left knee, however it was injured.

Equally revealing is Haney’s revelation that, “Tiger played the driver with a lot of fear,” and, “I can now admit I never felt totally comfortable when Tiger was standing over a drive in competition.”

That draws a much different snapshot than Woods’ current reality. He ranks 14th on the PGA Tour in driving accuracy and is fresh off his first official victory in 30 months at Bay Hill.

But most of all, “Miss” offers an interesting, if not sometimes wonky and one-sided, glimpse into a complicated relationship and a man thrust into a difficult situation.

“He’d call me Henry. No one else, including my parents and sister, has ever called me that. It always made me feel good . . . Almost in spite of myself, I’d feel kind of touched,” Haney wrote.

Back when cell phones were used to actually call people, Hank Haney’s voice mail went something like this: “Leave a message after the tone, and if I feel like it, maybe I’ll get back to you.” It was vintage Haney charm — Hank’s way of stiff-arming the world with half a smile and half a growl. This and numerous other personality traits made Haney an ideal match as a swing coach for Tiger Woods. The only obligations either man felt were those they imposed on themselves.

In our dozens of conversations during the six years he worked for Tiger, Haney did an excellent job adhering to the company line, which meant giving up as little information as possible and projecting nothing but sunny days ahead in Camp Red Shirt. There was the odd gripe about a rusty short game or an unruly putter, but overall, Haney stood by his man and did his part to make the relationship work amid the avalanche of criticism aimed at both men for extended stretches.

Now I know better. In “The Big Miss,” Haney details the extraordinary levels of turbulence and uncertainty that made dealing with Woods such a chore. Those who question Haney’s motivation for writing the book — and violating the unwritten “code” between an instructor and a player — would do well to read it before rushing to judgment or offering presumptuous opinions on Haney’s integrity.

As a golf writer, I found this behind-the-curtain peek quite interesting, notably the chaos so prevalent in Tiger’s world, much of it due to fame and injury, and the eggshells everyone seemed to walk on when things weren’t going well. The good times should have far outweighed the bad, but one doesn’t necessarily get that sense in “The Big Miss.”

Everyone has problems, even guys with 14 major titles. Haney probably could have taken things even further if he’d chosen to be malicious, but the finished product here is revealing, insightful and honest. For better or worse.

Hank Haney's book of his six years with Tiger Woods is mistitled. It should be called 'The Big Compromise' rather than “The Big Miss.”

The Houston-based teacher depicts a clear clash in personality and conviction between he and Woods, made almost whole by significant concessions in their time together. Ironically, because their Great Compromise worked as well as it did, the end of their relationship was certain.

Woods bought into Haney’s philosophy, geared toward a more conservative style of play to continue winning and protect his health. Haney made small corrections to help the 14-time major winner avoid his biggest fears, sacrificing distance and aggression for shotmaking and confidence.

Not an easy student – always prone to tinkering, aiming to gain even an extra yard – Woods thrived from the structure Haney’s long-term plan provided. On the doorstep of Jack Nicklaus’ major championship record, Woods languished in myriad side interests that wrecked his marriage and, perhaps, his shot at winning 19 majors.

Haney understood, but struggled to accept, the cold-blooded persona Woods projected to maintain his edge over the golf world, seemingly feeling unappreciated by his student. Believing at the onset he could easily be cast aside, Haney eventually hoped he could be to Woods what Jack Grout was to Jack Nicklaus.

When push came to shove, of course, it was Haney who changed more for Woods. Haney ended their relationship, but the complete Woods story is still to be written – and unlikely to be ever told in full.