Bigger than most: A look inside Tiger Woods' Hall of Fame display 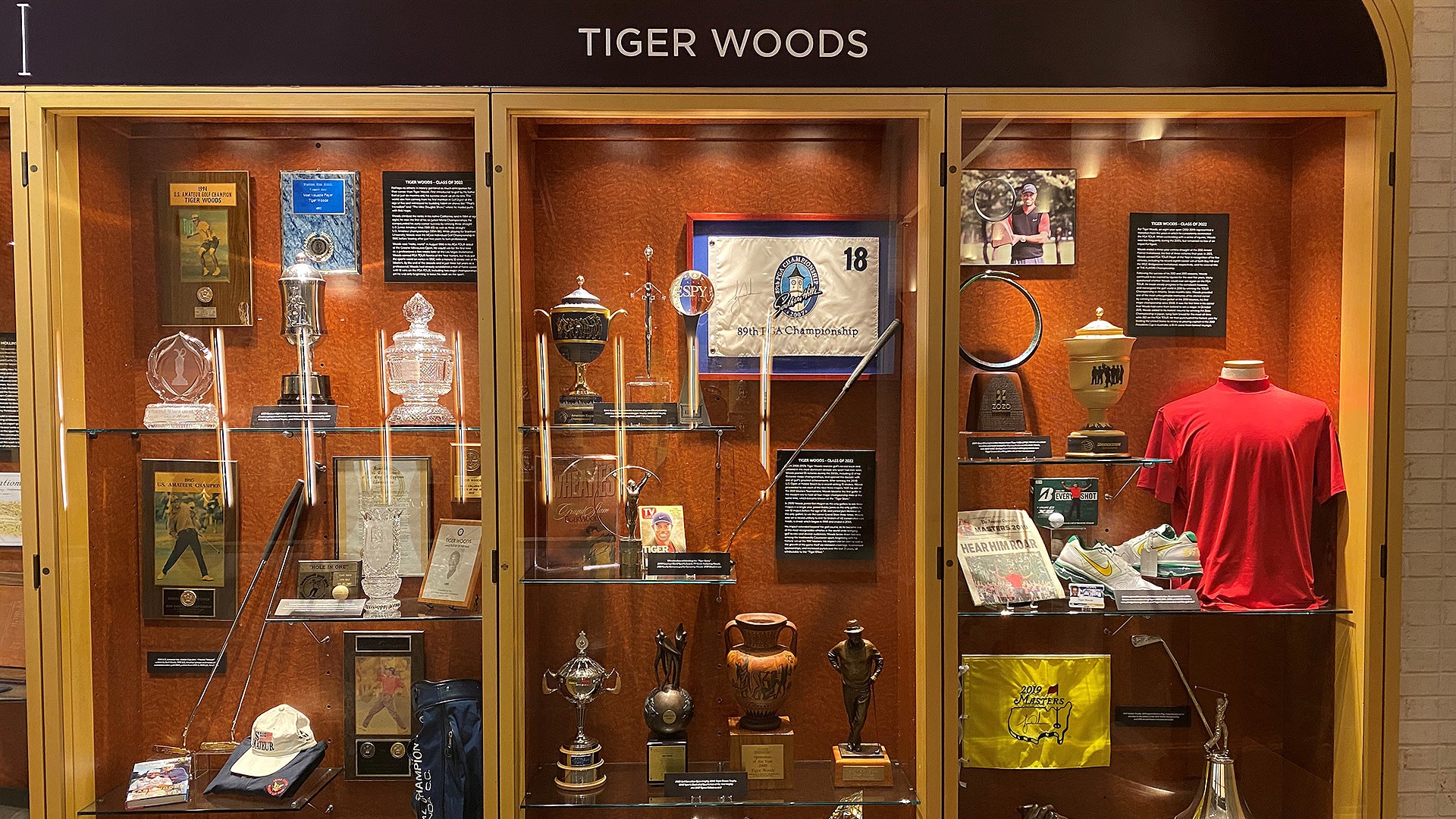 ST. AUGUSTINE, Fla. – They could appropriately have given him his own exhibit, his own wing, maybe even his own floor. Such is Tiger Woods’ unparalleled impact that it wouldn’t have seemed excessive.

But come this summer, his presence in the World Golf Hall of Fame will primarily be limited to this faux wood locker on the second floor of the Lobby & Exhibits building.

Like every other inductee, Woods’ locker is a foot wide, 6 feet tall and 2 feet deep. The few items stored there are behind a plexiglass wall, preserved for posterity. While pops of personality dot other members’ lockers, Woods’ only sentimental item is a signed ball from the 1992 L.A. Open, his first PGA Tour start. The rest is a nod to his global brand: a TW hat and belt, a box of Bridgestone balls (with a TIGER ball on display), a Monster Energy water bottle, a blue Nike polo and a full-size staff bag stocked with lightly used TaylorMade clubs and a white GolfTV towel draped across the front.

A one-paragraph blurb on the inside panel tries to neatly summarize both his career achievements (his 82 wins, his 14-1 closing rate in the majors, his 683 weeks as world No. 1) and his work through his TGR Foundation (2 million students reached). At the bottom reads a fun fact: Tiger Woods was voted ‘Most Likely to Succeed’ at Western High School.

Woods on Wednesday will officially be inducted into the World Golf Hall of Fame at the PGA Tour’s headquarters, along with former Tour commissioner Tim Finchem, three-time U.S. Women’s Open champion Susie Maxwell Berning and the late Marion Hollins. But 25 miles south, in the World Golf Village, his Hall of Fame exhibit (two-day ticket: $20.95) has been on display since Dec. 4.

Some of Woods’ items are sprinkled throughout the Hall. His Ryder Cup yardage book, polo and putter headcover appear in the Team Gallery. There’s a commemorative check from Woods’ first victory, at the 1996 Las Vegas Invitational, for $297,000. (That’s what T-11 paid out last week at Bay Hill. Thanks, Tiger.) His 2001 Waterford Crystal trophy sits in THE PLAYERS gallery.

But the main display is here, tucked into the far-left corner of Shell Hall, with famous tournament calls from Jim Nantz and Dan Hicks booming through the expansive room.

Last year, the Hall’s memorabilia curator reached out to Woods’ team, requesting a list of items (on loan through June 30) that he deemed “essential” to the exhibit.

“We were a little apprehensive,” said Jess Munroe, the Hall’s director of guest services, “but he blew us away.” 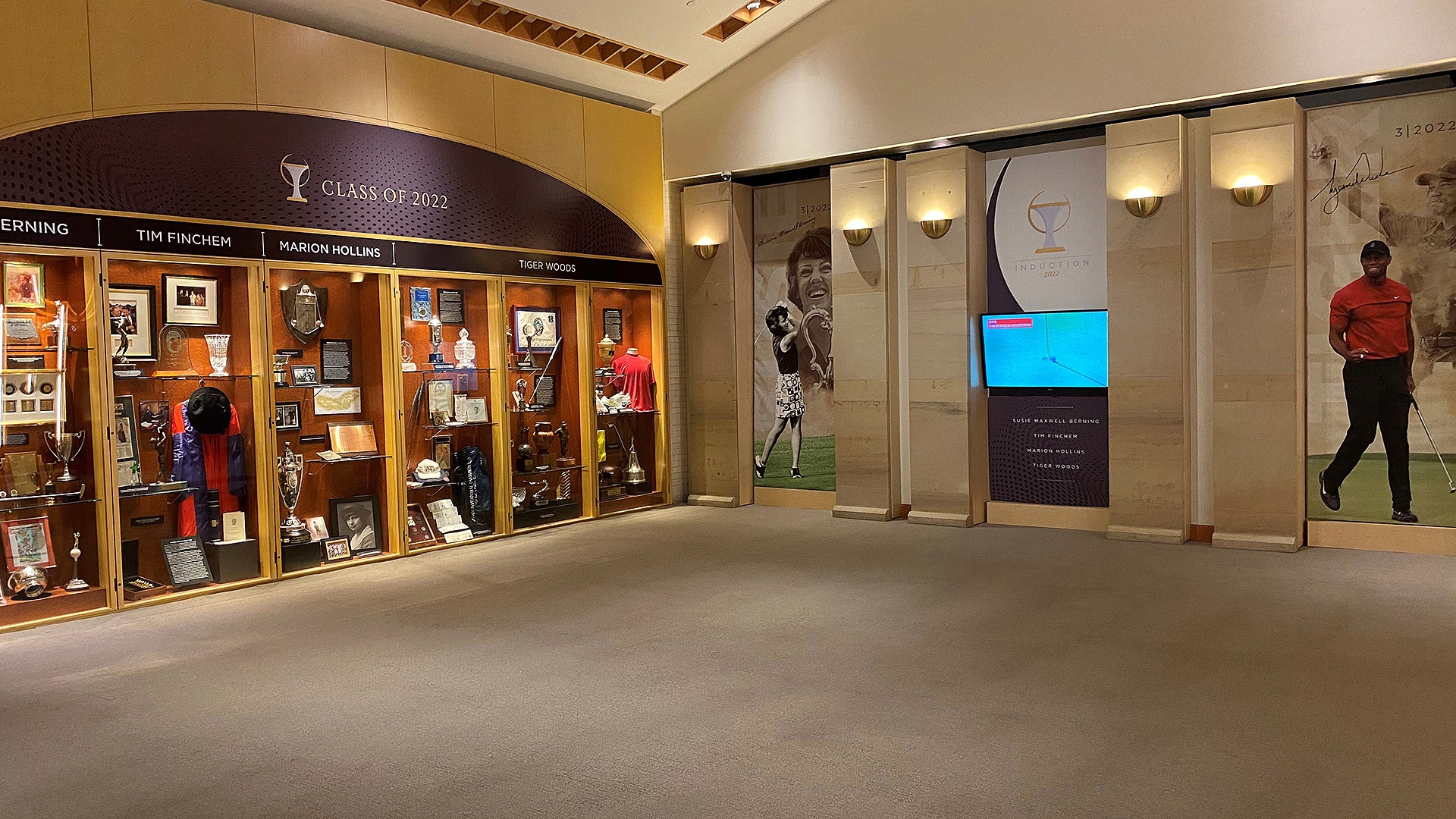 Most inductees receive a single glass enclosure. Maybe two, if their career was hugely significant. Woods has three – believed, not surprisingly, to be the most space ever dedicated to a new inductee.

Berning displayed, among other items, her 1968 Oklahoma Sportsman of the Month plaque. Finchem chose an honorary degree from the University College Dublin, a 2002 Sports Leadership Award from the Greater New York March of Dimes luncheon and commemorative knives from the 2004 Ryder Cup. Hollins’ memorabilia includes a gold-plated scorecard from the 1929 Opening Day exhibition match at Pasatiempo with Bobby Jones, Cyril Tolley and Glenna Collett.

Meanwhile, Woods’ collection has ... well, where to start?

There are the obvious picks, the ones recognizable to any golf fan. There are his amateur medals in the left case; a replica Scotty Cameron putter honoring his “Tiger Slam” in the middle; the Zozo trophy (his record-tying 82nd Tour win) and a signed 2019 Masters flag on the right. 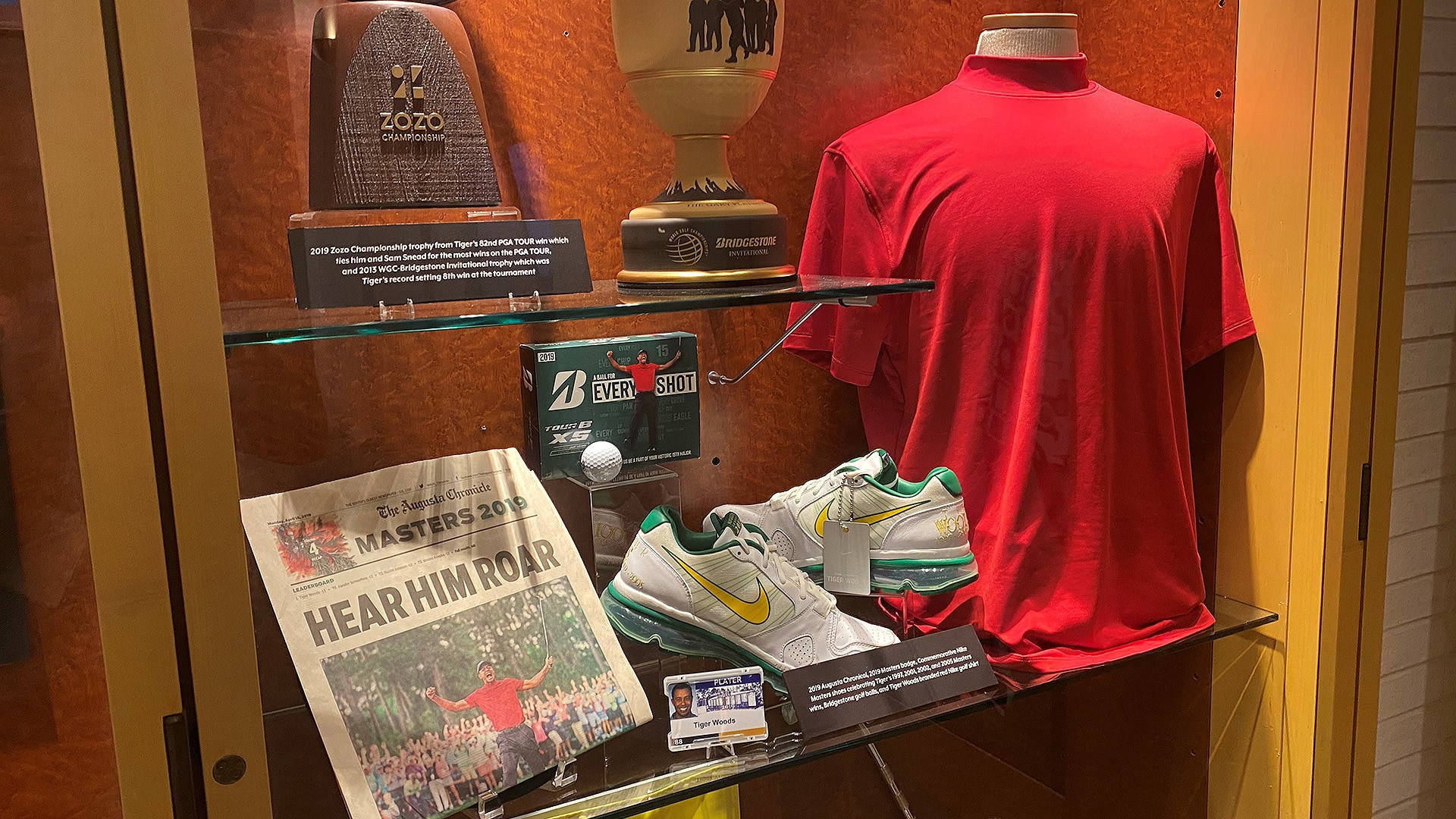 Even more interesting are some of the obscure items, ones that either were requested from the Hall or provided by Woods (or his mother, Tida) that tell a few little-known stories of his golfing genius.

There is his 1982 hole-in-one ball plaque from Heartwell Golf Park in Long Beach.

There is a 1983 decree from the City of Cypress commending then-7-year-old Tiger on his precocious golfing talent and extending, “Best Wishes for all the years to come.”

There is a carry bag awarded to Woods after he won the 12-13 age group at the 1989 Yorba Linda Junior Invitational.

There is his 1992 Western High School MVP plaque.

There is a collector’s edition of the June 9-15, 2000 “TV Guide,” commemorating Woods’ “shot at making history” ahead of the Pebble Beach Open. (How’d that turn out?) 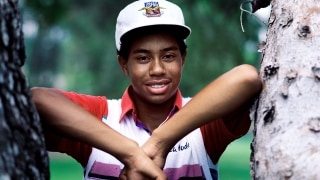 Making predictions about what golf prodigies will achieve rarely works out. But there was something about Tiger Woods.

There is his Masters player credential (registered No. 88, with a dated headshot) from his improbable 2019 triumph.

Short of a Tiger-only wing, those three displays represent a comprehensive look at his career. It’s all there, from his audacious start to his dominant prime to his inspiring final chapter. There don’t seem to be any glaring omissions.

On the way out, in the main lobby, is a display celebrating Woods’ short but spectacular Stanford career. The highlight is the first recruiting letter that then-coach Wally Goodwin sent Woods, then just 13 years old.

“Dear ‘Tiger’!” Goodwin started, before stressing how seriously Woods should take his academics. Advanced-level courses. A 3.6 GPA. A SAT score of at least 1200.

“I am looking for a few tough kids, winners!” Goodwin wrote.

All he found was the most prolific winner in Tour history, now immortalized in the World Golf Hall of Fame.