Pain in the neck: Haas contending despite injury 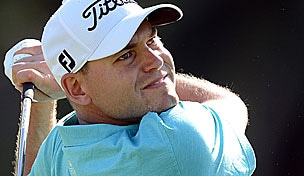 ORLANDO, Fla. – Bill Haas got himself into contention playing through neck and shoulder pain Thursday at the Arnold Palmer Invitational.

Given all the violent torque in a golf swing, Haas is mystified at the way he injured himself.

While in Los Angeles before the start of the Northern Trust Open, Haas reached down out of the shower to grab a towel. He felt a jolt of pain that hasn’t relented much in the five weeks since.

“It’s something that just hasn’t gone away,” Haas said. “It’s bothering me, but I can still play.”

Haas posted a 3-under-par 69 at Bay Hill Thursday despite making bogeys at three of the final five holes. He said there’s pain in his neck and left shoulder, but he’s unsure exactly what the cause is.

“I just get in the [fitness] trailer and they work on it,” Haas said. “I don’t really know. I haven’t got it X-rayed. It’s something I’ve never had. When I look to the left, it hurts. When you swing, you look to the left.”

Haas said he nearly withdrew from the Northern Trust Open, where he ended up finishing tied for third. He has made just two starts since then. He was eliminated in the first round of the WGC-Accenture Match Play Championship, and tied for 43rd at the WGC-Cadillac Championship.

Haas took last week off to rest, but he said the injury is just as aggravating this week. Still, he started hot Thursday, making four birdies and an eagle over the first 12 holes to race to within a shot of the lead.

He bogeyed 14, but the bogeys at the 17th and 18th were especially frustrating. He couldn’t get up-and-down out of a back bunker at the 17th and missed a 3-foot putt at the 18th.

“It certainly hurts worse when you make three bogeys,” Haas said. “It’s one of those things, when I’m playing well, I don’t notice it. When I’m not going well, I notice it. I just need to keep grinding and not worry about it and hopefully it gets better.”