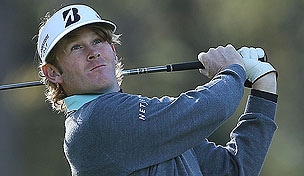 After suffering through a string of rib injuries over the past few years, reigning FedEx Cup champion Brandt Snedeker has finally identified the source of his problem: a condition known as low bone turnover.

'I had everything tested and they found this one anomaly with my DNA,' Snedeker said as part of a Golf Magazine interview. 'What it boils down to is that my ribs are just really brittle compated to the rest of my bones.'

After a pair of runner-up finishes at Torrey Pines and TPC Scottsdale, Snedeker battled through rib pain to claim the AT&T Pebble Beach National Pro-Am in February. After hoisting the trophy, he revealed an intercostal strain, an injury to his rib cage that ultimately sidelined him for six weeks. Frustrated by an inability to remain healthy, Snedeker sought out several medical opinions on what might be causing his recurring rib injuries.

'I had a few specialists look at me and I said, 'This is not normal,'' explained Snedeker, who has reportedly cracked four ribs since 2007. ''I'm having these injuries all the time, and they're from no contact whatsoever; they're from golf.''

In cases of low turnover, the body is slow to replenish older, more brittle bone material with newer, denser cells. Snedeker is reportedly now taking a medication called Forteo to help boost his bone density, a treatment the 32-year-old reiterated was in line with the PGA Tour's anti-doping policy.

'I made sure it's okay to take,' he added. 'It's a drug that's going to help me keep my bones from being less than brittle to being up to par.'

After top-10 finishes at both the Masters and The Players Championship, Snedeker will make his next start at The Memorial Tournament next week in Ohio.