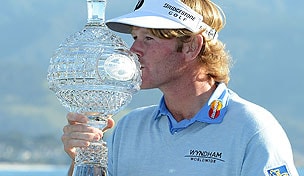 If you’re reading this, congratulations. You’ve successfully navigated your way onto the Internet. As you’ve probably already discovered, this place can be a bastion of quality information. Book a flight, find out which year the Magna Carta was signed, check out bikini models, whatever. It’s all here.

That’s the good stuff. Then there’s the other stuff. The anonymity of hiding behind a keyboard can promote way more hate-mongering than anything you’d ever hear in person. In golf’s little corner of the world, it can manifest itself in ridiculous ways. There is contempt for Phil Mickelson being too outgoing and Tiger Woods not being outgoing enough. There is disdain for Ian Poulter being too flashy and Retief Goosen not being flashy enough. You get the picture.

All of which leads us to Brandt Snedeker. He is a marvel in this world, an anomaly in full. People either like Snedeker or just don’t know enough about him yet – and yes, that includes the usual keyboard-tapping hate-mongers.

It’s funny – this piece is called Ten Reasons You Like Brandt Snedeker, but it could easily be called Ten Reasons Brandt Snedeker is Playing So Well. Those two things don’t always go hand in hand – there are successful players who aren’t well-liked and popular players who aren’t very successful – but in this case, in the wake of his AT&T Pebble Beach National Pro-Am victory, they are one and the same.

1. Because he understands his placement in golf’s hierarchy.

Last week, after a second straight runner-up finish moved him to what was then a career-high sixth in the Official World Golf Ranking, I asked Snedeker whether he receives enough credit as one of the game’s elite players.

No sense of self-entitlement, no Rodney Dangerfield “I get no respect” barbs.

With his win, Snedeker moved up to No. 4, but his feelings on being considered elite undoubtedly haven’t been altered. “Until you win majors,” he said Sunday night, “you’re kind of in the second tier.” This is a guy who gets it. Six months of torrid play is terrific, but five career wins can get you only so far without a major. It’s refreshing to watch and listen to a player whose ego hasn’t become overinflated by a modicum of success.

2. Because he’s been sporting some ridiculous, eye-popping numbers lately.

Dating back to last August, Snedeker has played nine official PGA Tour events. He’s finished sixth or better in seven of them, including wins at last year’s Tour Championship and this past week’s Pebble Beach Pro-Am, and three runner-up finishes.

Since the Tour started keeping stats like these in 1990, he’s the first player to follow back-to-back second-place results with a win in the third week.

And my personal favorite …

In the past three weeks, he has played against 441 fellow competitors and beaten 438 of them.

That’s a loss to Tiger Woods at Torrey Pines (where he shared second with Josh Teater), a loss to Phil Mickelson in Phoenix and a win at Pebble Beach.  If there’s one hard-and-fast rule to finding success, it’s that beating nearly everyone you play against should help matters.

3. Because he plays like a guy who’s about to catch hell from his wife for being late to dinner.

We’ve all teed it up with guys like this. Types who barely have their yardage before they’re already in their backswing. Types who don’t read putts from every possible angle. Types about whom we say, “I think I play fast, but that guy? Man, he’s in another gear.”

There aren’t too many of these types on the PGA Tour, where apparently the tortoise serves as king of the jungle. But if you believe that your local muni has gotten slower from hackers trying to emulate the likes of Kevin Na and Ben Crane, then it should stand to reason that we’ll all play a little faster after consuming Snedeker’s rapid pace.

With the USGA turning its attention to slow play and the PGA Tour promising to keep “looking at it,” the game needs a face for ready golf. That face can very well be Snedeker, who is proving that fast play and great play don’t have to be mutually exclusive.

In fact, forget the foursome in front of you at the local muni learning a little something from him. Let’s just hope his professional peers are paying attention.

4. Because he putts really well.

At some point in the last year or two, Snedeker overtook Steve Stricker (who had previously overtaken Brad Faxon) as the guy who rolls it truer than anyone else. Maybe not the man you’d pick for the proverbial “make one putt with your life on the line,” but definitely the one you’d pay good money to watch on the practice green. He putts with pace; he putts aggressively; he putts to make rather than to not miss.

So it shouldn’t come as a surprise that in the past four seasons he’s ranked in the top 20 in putting each time, topping the list last year.

Maybe it tells us more about the act of putting than anything about Snedeker himself when we break down his stats from this season – when he’s been playing perhaps the best golf of his life – and find that, well, he hasn’t been as impressive as most of us have thought.

Entering the Pebble Beach Pro-Am, he ranked 25th in strokes gained putting (good), 113th in three-putt avoidance (not so good) and 200th in total putting (really not good). On Sunday, he three-putted the ninth hole after a brutally ugly birdie attempt, which was eerily reminiscent of his four-putt on the final hole of the 2009 BMW Championship – a blunder which cost him not only thousands of dollars, but berths in a few major championships, too.

And yet, it seems like every time we see him, he’s pouring in a 12-footer that finds the dead center of the cup.

What does it all mean? I interpret it like this: Putting ain’t easy. Nobody makes all of 'em. But Snedeker makes more than anyone else and – most importantly – makes more momentum-saving putts than anyone. There’s no stat to back this up, but I’d put him up against all competition when it comes to holing a long par attempt to keep from backtracking or making an unlikely birdie that sparks a rally.

7. Because he really enjoys playing golf.

There was a poignant moment on the final green at Pebble Beach on Sunday afternoon. With his par putt marked safely near the hole to clinch a two-shot victory, Snedeker was grinding with a read. Not for him, though. For his pro-am partner, Toby Wilt.

Granted, the two men are longtime friends; granted, Snedeker was reading putts for him throughout the week; and granted, this one was for the outright pro-am title. But it still spoke volumes about the man that he not only gave the putt a read, he actually cared if it went in. When Wilt’s lemon-yellow ball slid agonizingly by the hole, Snedeker looked crestfallen.

Other than that moment, though, he flashed a ubiquitous smile for four days around the Monterey Peninsula. And that wasn’t only when he was raining putts. Snedeker is the rare pro who appears to relish the challenge of a wayward tee shot or approach, who looks just as happy saving a tough par as he does making an easy birdie.

Don’t believe how much he loves the game? Check out this story: Thinking this year’s U.S. Open venue is tailor-made for his game, I recently asked him if he’d ever played Merion before. Snedeker revealed that he hadn’t, but he was eager to go there soon. Not on a scouting mission or to prepare for the major, but as part of a buddies trip. Yes, he’s a pro golfer who plays golf on vacation. That’s a rarer thing than you might expect.

8. Because his on-course strategy is so complicated that only he understands it.

After one round this past week, Snedeker unleashed his best Yogi Berra impersonation: 'My M.O. is to not do anything stupid. Unfortunately, I don't do it very often.'

Mention those two names to any golf fan and ask what they have in common. In almost every instance, the response will be one word: consistency.

Week in, week out over the past few years, those guys have been pulling top-10 finishes and six-figure paydays. Now they’re joined by Snedeker – and for now, even bypassed – in an elite group of players who fare just as well in prestigious tournaments as regular events and just as well on big ballparks as ball-strikers’ setups.

Prior to the first week of this season, I asked about a dozen players what they most wanted to accomplish this year. The majority said, “More consistency.” Right now, Snedeker is accomplishing that better than anyone else.

10. Because he’s on a great run right now – and it won’t last forever.

That’s not a knock on Snedeker. It’s just golf. I could have written a piece similar to this about Jason Dufner nine months ago. Since then, he hasn’t finished better than seventh in an official PGA Tour event.

Guys get hot, they stay hot for a little while, then it fades. As Padraig Harrington said recently, “Everybody peaks. Professional golfers tend to last about 18 months when they peak, then drift back to who they are.”

If that’s the case, then Snedeker is about halfway through his peak – the peak of his peak, if you will.

I’ve always thought what separates the all-timers from those who are “only” great is their ability to extend this peak. Some of the best players can double or triple that time at the top of their games. Hell, Tiger Woods extended his 18-month apex to 14 years at one point. Maybe this isn’t the case for Snedeker. Maybe he’s one of the all-timers, blossoming before our very eyes, never to come crashing down to normality.

Chances are, though, he’s just riding this peak. It’s been fun to watch. Enjoy it while it lasts.