Lang gets an on-air marriage proposal 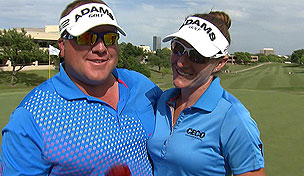 After putting out for par to finish her round at Las Colinas Country Club, Lang was met by her boyfriend, Kevin Spann, as she walked off the ninth green, her 18th hole of the day. Spann took a knee with Golf Channel television cameras rolling and proposed while presenting her an engagement ring.

Spann asked Lang if he could watch her play golf the rest of their lives. Lang accepted the proposal and kissed Spann.

“We’ve been together about 11 months,” said Lang, who was wearing her new engagement ring after signing her scorecard. “We met at the club that we play at, and it’s been going very well. I had a few ideas [this might be coming] because he’s been acting a little strange.”

Lang, 27, said she met Spann last year in the parking lot of the golf course they both play, the TPC Craig Ranch in McKinney, Texas. Lang was raised in McKinney and still makes her home there. She is one of 11 LPGA pros from Texas in this week’s event in Irving, Texas.