NEWTOWN SQUARE, Pa. – Brittany Lincicome, aggressive in shooting an opening 67, vowed to stick to that game plan in Round 2 of the KPMG Women’s PGA Championship.

“I didn’t stick to my game plan, if anybody cares,” she told the media after her 2-over 72 on Friday.

“Just tried to keep it in play. Those pins out there today were not very nice.”

Lincicome made 16 pars and two bogeys in the second round at Aronimink Golf Club. She dropped to 1 under for the championship, but was just three off the 36-hole lead.

“Just didn't stick to the game plan, wasn't aggressive right out of the gate, was just kind of lollygagging my way through the first couple holes to get a feel for how the day goes, which is what I normally do, which is what I said I wasn't going to do,” Lincicome said. “So yeah, I can't wait for tomorrow. I'm just going to go out guns blazing.”

Lincicome said because of the testy hole locations, she played conservatively and had lots of 30- and 40-footers for birdie. Those lag putts often came up short as well, for fear of running them too far by and missing the comebacker.

Every now and again, she’d make a solid par save and, “I would look at Misty, my caddie, and be like, ‘OK, let's go, here we go!’ And then it still didn't happen,” she said.

But being two back in a bid for her third career major title has Lincicome excited for the weekend. She’ll go to bed tonight, she said, thinking about returning to the game plan. 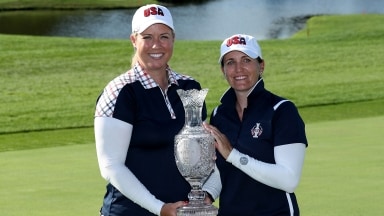 Brittany Lincicome's caddie Missy Pederson, who is recovering from COVID-19, wants to get back to work but she also wants to do so safely.