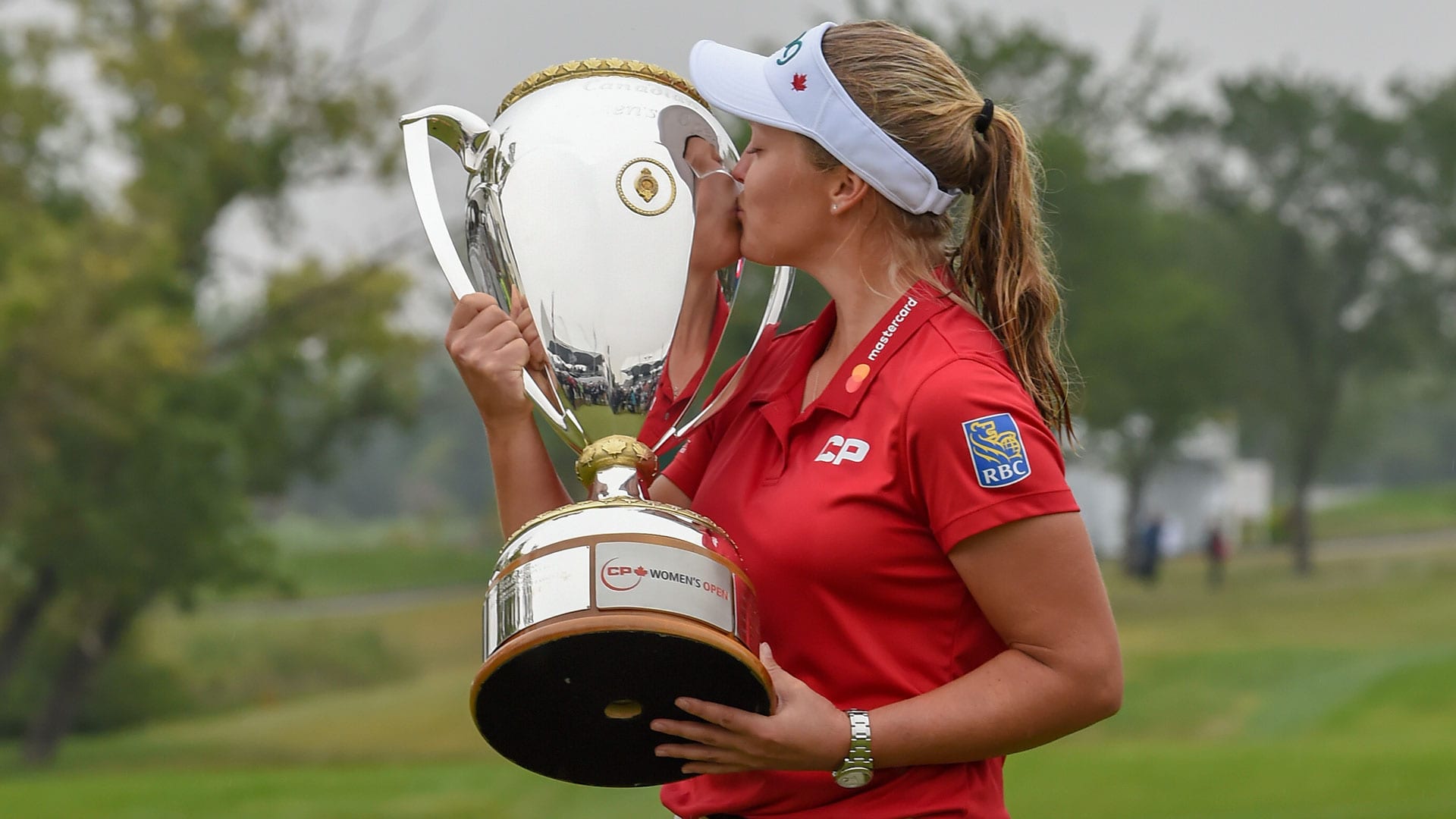 She won the CP Women’s Open Sunday in Regina, Saskatchewan, to become the first Canadian to hoist the trophy since Jocelyne Bourassa won the inaugural title 45 years ago.

Henderson did so in style, pulling away with four consecutive birdies on the back nine to turn her walk up the 18th fairway into a victory parade.

With a strong Canadian following rushing up the last fairway behind her, Henderson added one last birdie to win in a four-shot runaway.

After the last putt fell, fellow Canadians roared their approval. They chanted Henderson’s name and broke out in song, filling the air with “O Canada” while the country’s flag waved over the grandstand behind them. Brooke’s father, Dave, doused his daughter with a bottle of champagne as Brooke’s mother, Darlene, watched.

“I still have some in my ear,” Henderson said later.

“It’s amazing, just surreal,” Henderson said. “The crowds have been amazing all week and to finish it off the way I did is really a dream come true.”

Still just 20, Henderson’s seventh LPGA title leaves her just one victory shy of equaling Sandra Post’s record for most won by a Canadian.

A shot ahead at day’s start, Henderson was in control coming down the stretch, closing with a 7-under-par 65 to finish at 21 under overall.

“It’s like the sixth major to me,” she said at week’s start.

Angel Yin finished second playing alongside Henderson in the final two rounds. She marveled at the support.

“People shouting her name, like 9 o’clock in the morning,” Yin said. “I bet you she felt pressure, but she’s used to it, and she handled it pretty well, and she finished the job.”

It’s been a summer of meaningful nationalistic breakthroughs.

Two weeks ago, Georgia Hall won the Ricoh Women’s British Open at Royal Lytham & St. Annes, becoming just the second Englishwoman to win the event since it became a major.

It was Henderson’s first LPGA victory in Canada, and that made it emotional. So did winning in the wake of losing both of her grandfathers this summer.

“It's been a really tough year,” Henderson said. “So to get this for my family, and just for the whole of Canada, I'm really happy.”

Brittany Henderson, Brooke’s older sister, was a vital part of the week’s success. She has set aside her own career as a player to be Brooke’s full-time caddie.

Henderson’s father has been a big part of her development, and she calls her mom her biggest supporter.

“This was a big dream and a big goal for all of us,” Henderson said. “I think it's just a cumulative effort of all of us that gave me the chance to be able to lift that [trophy].”

Gas was 40 cents a gallon the year Bourassa first won the event. Secretariat was the Triple Crown winner. Hip Hop was just emerging as a musical genre, and Federal Express was just getting started as a courier delivery company.

Henderson grew up in Smiths Falls, Ontario, 1,600 miles east of Regina, Saskatchewan, but she was embraced as a hometown favorite from the start. She was on billboards around the city promoting the event. She had bobble heads of her likeness given away at the tournament site.

Her photo nearly dominated the cover of the local sports page advancing the event.

“I definitely feel like it was meant to be this week,” Henderson said.