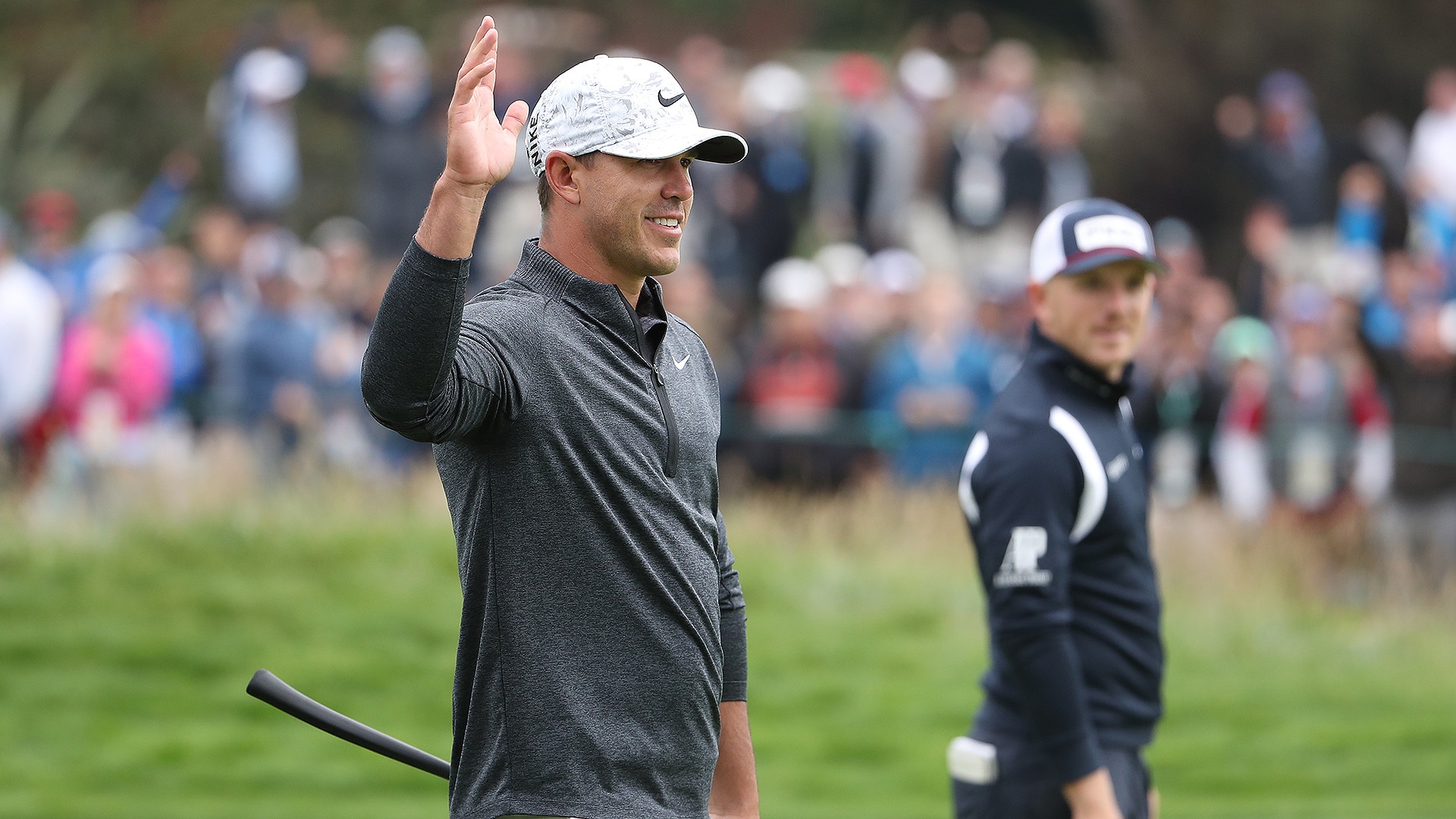 PEBBLE BEACH, Calif. – The three-peat could have vanished on 18.

Brooks Koepka popped up his final drive, and his ball came to rest directly behind the cypress tree that splits Pebble Beach’s 18th fairway. His options were bleak: He was 270 yards to the flag, with his ball positioned on a slight upslope, above his feet, with an overhanging limb a few yards ahead of him and a cold wind blowing in from his right.

Oh, and one other thing: “The Pacific (Ocean), you’re staring at it,” Koepka said. “I really couldn’t see anything even from where I was standing over the ball.”

A chip-out was no guarantee – he’d have about 210 yards left for his third shot into the smallish green. A long iron wasn’t desirable, either – the fairway narrows the closer it gets to the green. And so he chose for the 3-wood, the option with the least loft and the straightest face, making it the easiest to keep below the limb but also cut away from the rock wall that borders the left-hand side of the fairway.

Koepka successfully pulled off the dangerous shot, and even though he didn’t convert the up-and-down birdie, he didn’t make bogey or worse, either, to blow himself out of this U.S. Open. The adventurous closing par put him at 7-under 206, four shots behind Gary Woodland. But the deficit feels so much smaller.

Earlier this week Koepka was asked what his opponents should think if they once again saw his name near the top of the leaderboard here at Pebble Beach. 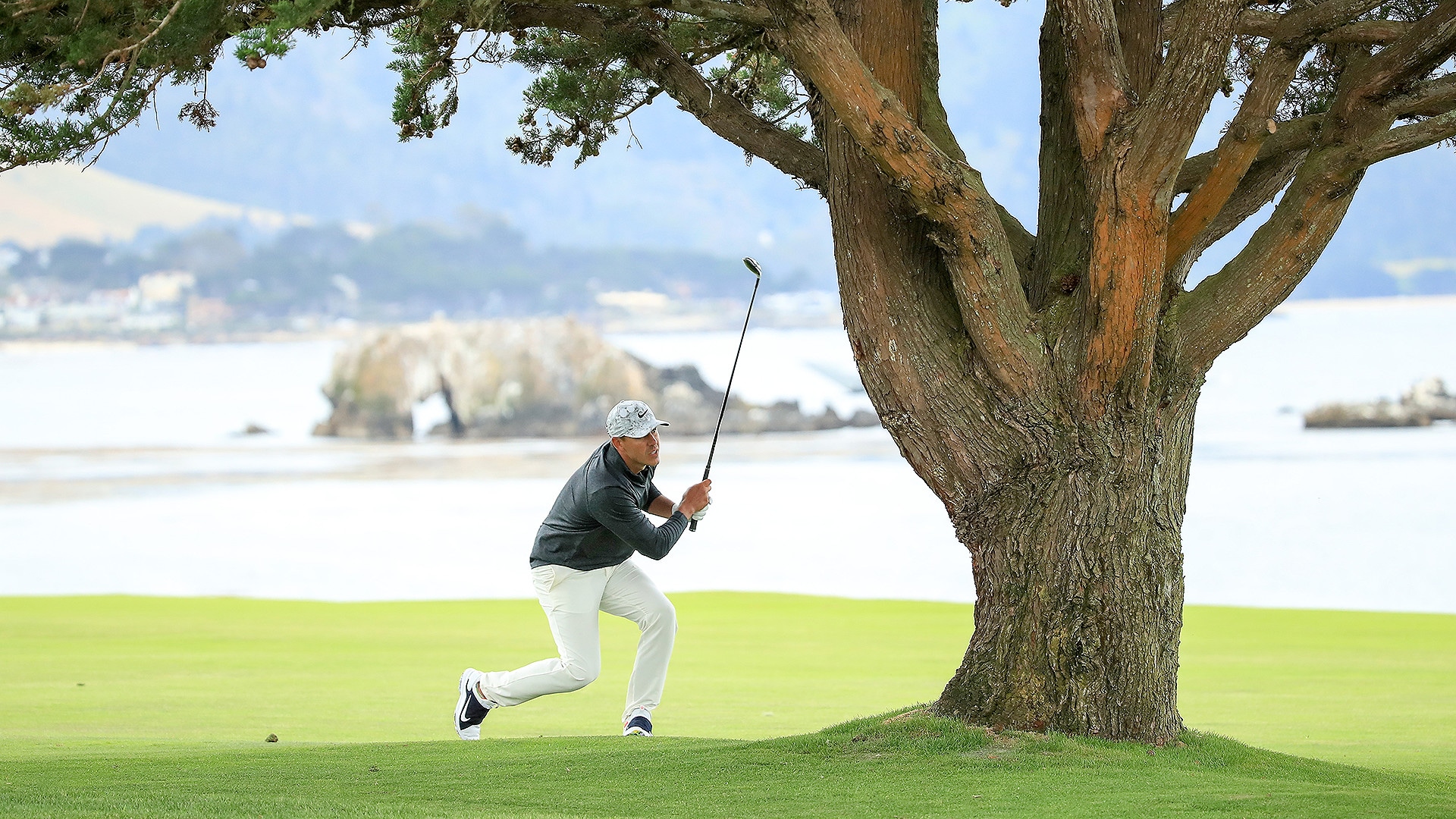 And sure enough, here Koepka is again, with just two players between him and a third consecutive U.S. Open title, matching Willie Anderson from the early 1900s.

Koepka’s bogey-free 68 Saturday set up a perfect final-round scenario for him.

Not only is Woodland 0-for-30 in the majors, but this is the first time he’s been within two shots of the lead heading into a major Sunday.

A steady diet of fairways and greens led Justin Rose to the 2013 U.S. Open title, but he’s been uncharacteristically wayward with his long game – he’s outside the top 35 in both strokes gained: off the tee and approach this week – and needed to ride a career-best putting performance into the final group.

Chez Reavie hasn’t won in 11 years. Louis Oosthuizen owns an Open title, but also the Runner-Up Slam. And each of the past 20 U.S. Open champions have been within four shots of the lead heading into the final round – so that, statistically, rules out Rory McIlroy (five back) and Matt Kuchar (six) and Jon Rahm (six).

No one is going to take down King Koepka, and he knows it.

“I feel as confident as ever right now,” he said.

Koepka leads the field in greens hit – an important stat, given Pebble’s tiny targets – and has recorded just a single bogey in his past 37 holes. Sure, he made a few nifty saves Saturday, including a 30-footer for par on 15, but he’s also gotten almost the bare minimum out of his sublime ball-striking, ranking 62nd in putting. Eventually, those birdie looks will drop.

“He’s played brilliant,” said his caddie, Ricky Elliott. “I don’t think he can play much better.”

A troubling sign for the rest of the field, because there’s no one who has played major Sundays better than Koepka recently. He’s won majors so many different ways – blitzing the field, coming from behind, holding off Tiger, composing himself late – that there’s no situation he could encounter in the final round that could rattle him. He is playing with the self-assuredness and serenity of a world No. 1 who has been there and done that, four times over.

As the 54-hole leader, Woodland said all the right things afterward. How Koepka has played phenomenally. How he needs to stick to his own game plan. How if he plays a solid round, those behind him, including Koepka, will need a “really, really special” day.

But Koepka and his team are also banking – correctly – on the premise that Sunday will be the most stressful day of Woodland’s professional life, and that, even at age 35, Woodland doesn’t yet have the experience to realize it.

“I’m very comfortable,” Koepka said later. “I don’t need to do much. Just let it come to you.”

And the U.S. Open title, one more time.