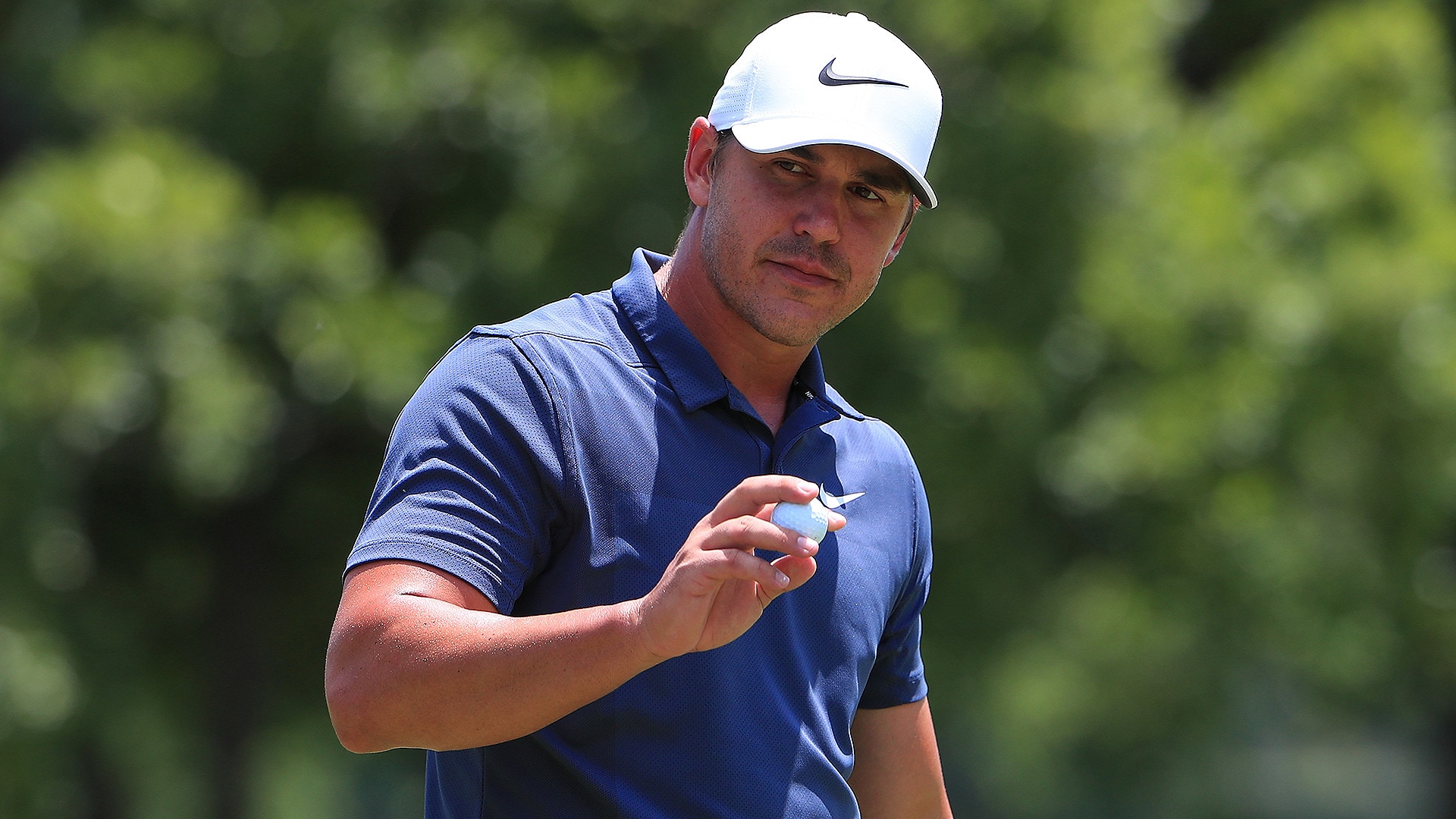 On his way to the Fort Worth Invitational, Brooks Koepka took a side trip to Houston to catch an Astros game. In addition to the A-list seats behind home plate, the defending U.S. Open champion was given a tour of Minute Maid Park by Astros owner Jim Crane, which included the training facility where the World Series champions workout.

On the wall, a quote from Hall of Fame first baseman Jeff Bagwell caught Koepka’s attention.

Koepka befriended Crane through his relationship with swing coach Claude Harmon III, who is based at Crane’s club, The Floridian, in Palm City, Fla. During a workout the following morning, Harmon took out his smart phone and took a photo of Koepka squatting in front of Bagwell’s words and made a mental note of Koepka saying, “I like that. I kind of think that way.” 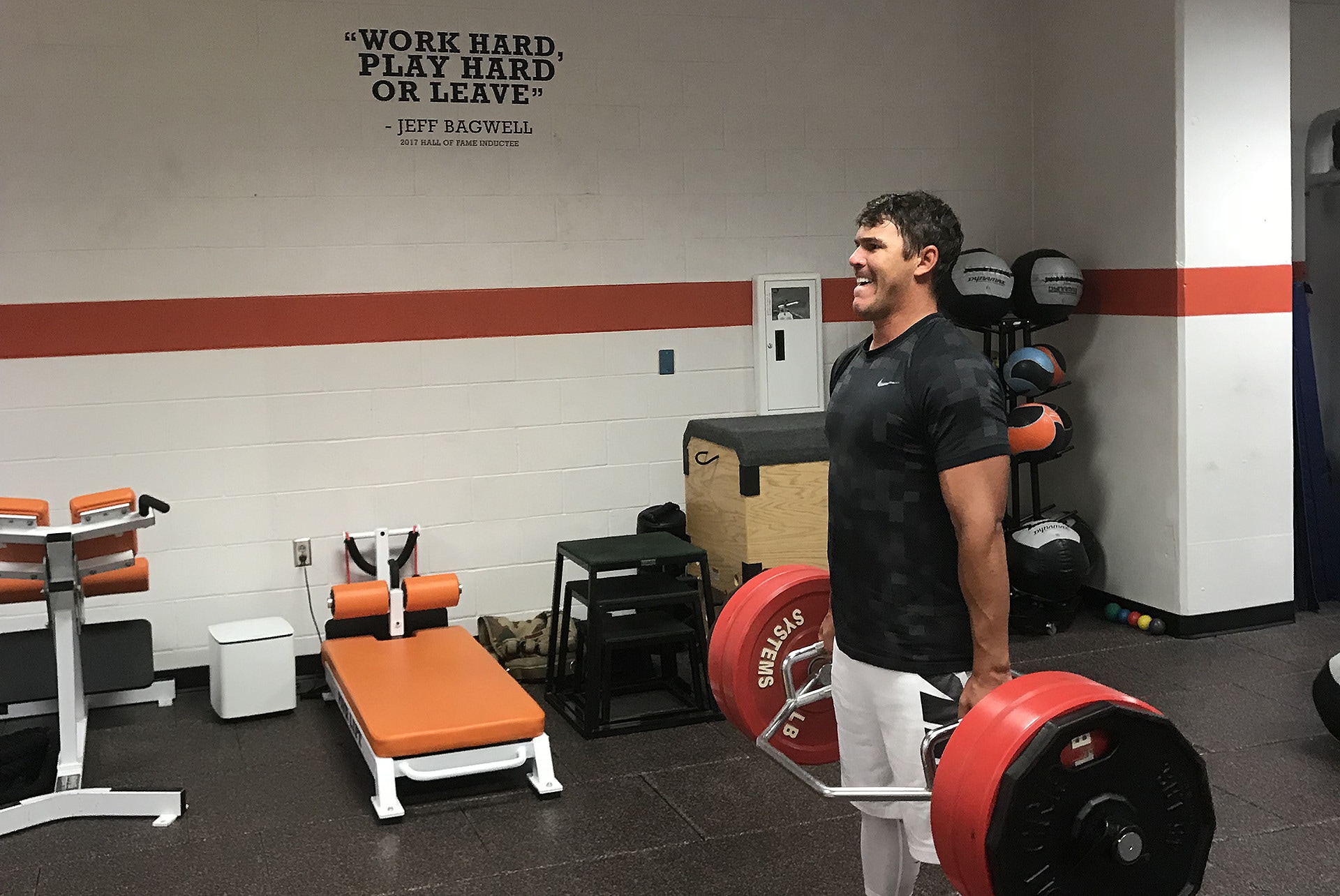 Koepka grew up in the suburbs of West Palm Beach wanting to play professional baseball, like great uncle Dick Groat, a shortstop for the Pittsburgh Pirates and the 1960 NL MVP. The irony is that he was never big enough playing Cal Ripken baseball (ages 4-12) to be a power hitter, which he is now with one of the fastest clubhead and ball speeds on the PGA Tour. “If I could do it over again, I’d play baseball,” Koepka says, “100 percent, no doubt.”

Koepka is clear that he wasn’t a “golf nerd” during his four years at Florida State, where he was as an under-recruited and unsung All-American who never won until his senior year. Instead, he was a workout monster. “He’d literally leave 100-percent drenched in sweat every time,” said his college coach, Trey Jones. “He only had one speed. Once he started his workout, it was just get out of the way.”

The same is true today in Joey Diovisalvi’s gym back home in Jupiter, Fla., where Brooks was bench pressing 10 reps of 225 pounds, upon recovery from a torn tendon in his left wrist. Sidelined in January, he returned in late-April looking bulked up and weighing 212 pounds on his 6-foot frame.

“He’s still the same kid today that literally comes into the gym and literally wants to kill it,” says Diovisalvi of the 28-year-old Koepka. “He wants to bench press more than anybody on the PGA Tour.”

In addition to his strength, Koepka hadn’t lost his any speed off his fastball when he came back after 91 days without touching a club. When Harmon checked his numbers on TrackMan prior to the Zurich Classic, Koepka was producing ball speeds with his driver in the high-170s (mph) to low-180s. Said Harmon, “I was blown away.”

Managing Koepka through the boredom of his rehab was more of an issue than motivating him. In a soft cast for two months, Koepka remained diligent to the process, never missing a day in occupational therapy or physical therapy. He would work on his cardio, get his 8-10 hours of sleep every night, and take a nap every day. The 17 weeks leading up to a decision not to play the Masters were the hardest, most frustrating part of the recovery.

This was not like the dislocated rib at the Arnold Palmer Invitational in 2015, when Koepka had trouble breathing between adjustments by physiotherapist Marc Wahl. That was the first and only time Koepka had to withdraw in his career. Seventeen months later, a torn ankle ligament didn’t prevent him from finishing T-4 in the PGA Championship to secure a spot on his first Ryder Cup team.

“Going through the (wrist) injury I talked to him and said, ‘Listen, I know you,’” Jones said. “‘Trying to tough it out isn’t going to be the way to do this one. You’re going to have to rest it.’ That was the concern of a lot of people. Because he can withstand some pain, he’ll suck it up at any point in time and not say a word to anybody. The pain thing, he’d just work through it. So that was a concern.”

As Harmon said, there were some dark times sitting on the couch. “He got some calls from people saying it was like Anthony Kim’s injury,” remembers Wahl, who knowing Koepka’s work ethic suggested the brace to protect and restrict the motion of his injured wrist.

And then the worst nightmare occurred. Wednesday before the start of The Players, while hitting 3-iron on the backside of the range at Sawgrass, Koepka saw a golf cart in the corner of his eye crossing directly in front of him. He instinctively checked his swing. The force and pressure of 100 mph clubhead speed caused Koepka to dislocate the same left wrist that cost him the first four months of the year.

After treatment and an MRI, Koepka’s first swings on the range before the opening round were with a lob wedge, chipping teed-up balls. A few days later he was shooting 63, in the final round, complete with an albatross. The kid's tough. He added two more 63s in his next start, two weeks later in Fort Worth, falling a few shots short of a red-hot Justin Rose.

After a week off at home, Koepka scheduled the FedEx St. Jude Classic based on second- and third-place finishes over the last two years. Going into his U.S. Open title defense, Harmon believes that Koepka is in a better place now with his game than prior to Erin Hills, where he tied the previous Open scoring record of 16 under par (Rory McIlroy at Congressional in 2011).

Among his peers, Koepka’s breakthrough moment was the 2014 U.S. Open at Pinehurst, where he was invited to a practice round with McIlroy for the first time and followed up with a T-4 finish, his first of six top-10s in majors. The following winter, after Brooks won in Phoenix, McIlroy tweeted, “Massive congrats to my boy @BKoepka on his first of many @PGATOUR wins!! See you in Jupiter soon for a celebratory drink.”

A year before he and McIlroy became boys – and four years before he was strapping the U.S. Open trophy into the leather seat of a private jet, on his way to a party in Las Vegas – Koepka was playing the European Challenge Tour, where he slept in cars, shared hotel rooms, and soaked up the atmosphere of traveling through Europe.

It was in 2013 that Koepka and caddie Ricky Elliott were coming off a win at the Scottish Hydro Challenge and traveling from the Scottish Highlands to an Open qualifier at Sunningdale, south of London, when they got a flat tire. After changing the tire in the cold and rain, and getting only two hours sleep, Koepka shot 69-65 to qualify for his first Open.

“In the States, sometimes it can be almost too easy,” Koepka said in an interview with The Guardian. “The way you travel, the fact you always have perfect weather. It is a little different here.”

One story FSU recruits often hear was the time in 2014 when Koepka flew to Tallahassee, days after finishing T-3 in the Dubai Desert Classic. It was February, 43 degrees and raining. But Koepka threw on a rain suit and went out to play with the team.

“Absolutely, Brooks was one we always talk to our current players about some of the things he’d say or do,” Jones said. “One of the lines he’d always use was, ‘Coach, its only golf. How hard can it be?’’’

By his own doing, Koepka likes to lay low, control his space, and stay off social media. It didn’t surprise Jones when Koepka turned down the media tour in New York after winning at Erin Hills. He just said, “That’s not me.”

With that comes a lack of recognition. Evidence of that occurred the week of The Players, when Koepka was working out with running mate Dustin Johnson at a gym in Ponte Vedra, when a woman working out at the facility asked Brooks to take a photo of herself and D.J. The next day the woman approached Diovisalvi and said, “I’m so embarrassed! Was that Brooks?”

Yes, that was Brooks, the same teenaged Brooks with the chip on his shoulder for not being an AJGA All-American, who did it his own way and won the U.S. Open on the longest course in the championship’s history by four strokes.

“There’s not one ounce of him being surprised he won the U.S. Open,” said Harmon. “We went out to dinner last February and he held his hand up saying, ‘I’m going to win a major this year.’”

No doubt, he goes into Shinnecock the same way he did the Astros’ workout facility – still working hard, playing hard, and not in any way going to leave.