In the battle of bros, Koepka 1-ups DJ 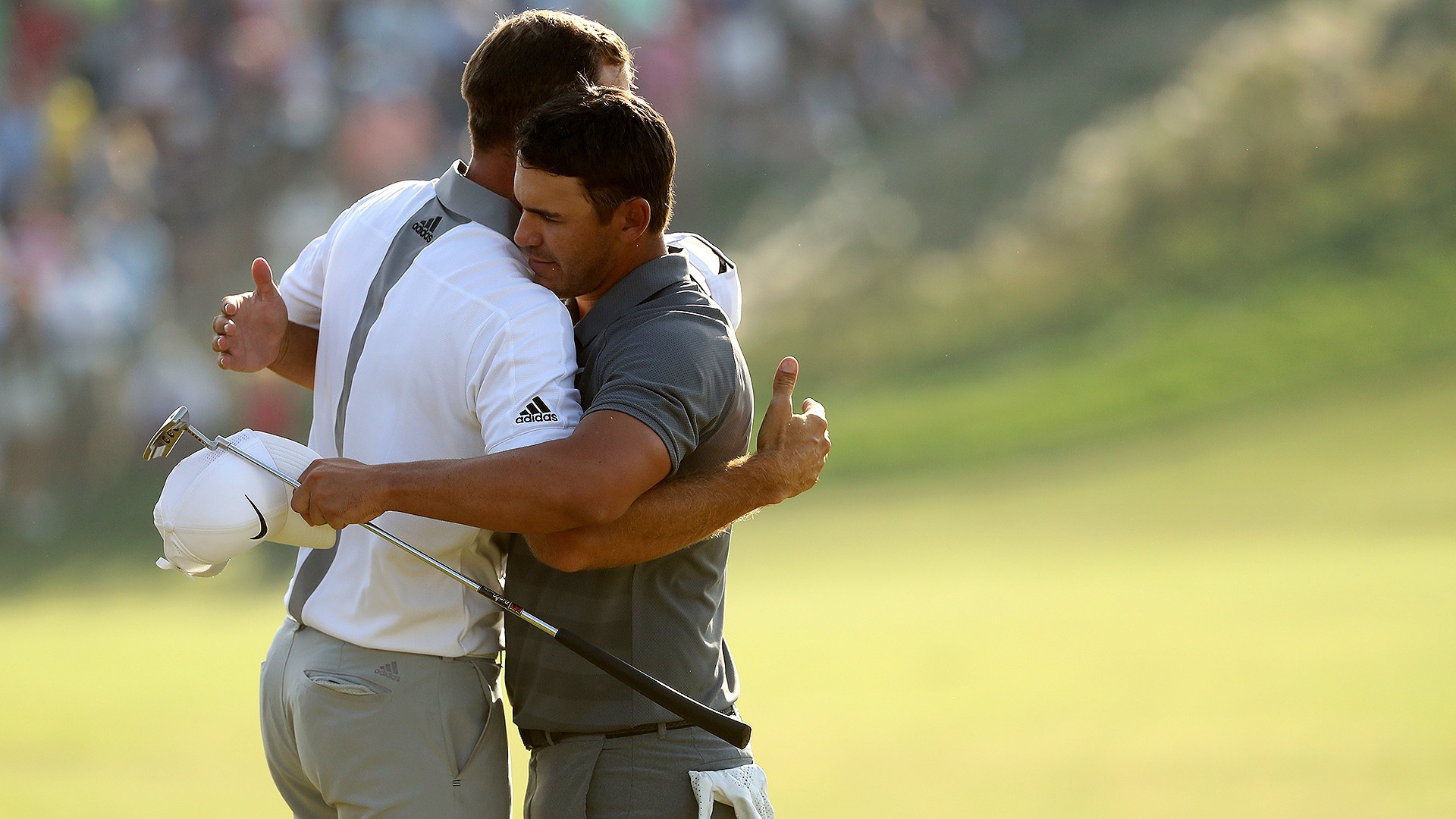 SOUTHAMPTON, N.Y. – It’s a scene that occurs on a regular basis at the Joey D Golf Training Center, frenzied workouts driven by an intense combination of competition and desire.

Under the watchful eye of longtime PGA Tour trainer Joey Diovisalvi, Brooks Koepka and Dustin Johnson will turn even the most mundane elements of their workouts into winner-take-all contests – from the duo’s warmup on stationary bikes to the various exercises that have turned the twosome into a pair of the game’s most imposing figures.

It was during one of these hyper-fueled sessions a few months ago when Koepka suggested he could become world No. 1.

“I think Brooks was 11th in the world at the time, and Dustin said, ‘Yeah, if you add a ‘1’ to that,’” Diovisalvi recalled. “Brooks said, ‘You wait and see; you want to come to my party and put the banner up?’ Dustin just laughed, ‘Not while I’m alive, it’s not happening.’”

That rivalry, which is as friendly as it is genuine, was taken to a new level on Sunday at the U.S. Open when the duo set out for the final lap in the day’s penultimate group. Golf’s undisputed Bash Brothers going head-to-head after having traded titles at the last two U.S. Opens, the prototype of the modern professional playing on golf’s most demanding stage.

To the New York masses, the twosome must have looked like the guy most likely to ask how long you’re going to be using the bench press at your local gym, a pair of golfing unicorns who have combined unrelenting power with wildly underrated precision.

With apologies to all those who set out for the final round at Shinnecock Hills with the greatest expectations, this was always going to come down to either Koepka or Johnson.

Koepka won his first U.S. Open in dominant fashion last year at Erin Hills and Johnson got on the board in 2016 at Oakmont, so it should have been no surprise that, as the duo went through their normal “game day” workout early Sunday together, there was the unspoken realization that the day’s competition was just beginning.

“[Koepka] likes to beat DJ,” said Claude Harmon III, the swing coach for both men. “We’re in an era now where it’s a great time in golf that all the guys are friends and there are great friendships, but trust me – all these guys want to win. Brooks wants to beat everybody, including DJ who is his closest friend out here. He wants to beat him in the gym, in everything they do.”

Even in the Official World Golf Ranking, which currently features Johnson atop the pack?

“Absolutely, he tells him all the time,” Harmon said.

Koepka won’t climb to No. 1 in world on Monday, but he did one-up his South Florida stablemate by becoming the first player since Curtis Strange, in 1989, to win back-to-back U.S. Opens.

It was a perfectly Koepka performance.

A day that began with a no small measure of apprehension following Saturday’s inexplicable setup snafu – that prompted some players to contend that the USGA had “lost” the golf course for the second consecutive championship at Shinnecock Hills – quickly settled into the kind of competitive grind for which the U.S. Open is known.

Koepka broke out of a four-way tie for first place with a 20-footer for birdie at the second, added another at the third to go two strokes clear and appeared to be on cruise control. But then U.S. Opens, real U.S. Opens where par is a good score and the USGA dances dangerously close to the edge, are never that easy.

The first crack came at the par-3 11th hole when Koepka airmailed the green and needed to convert a 12-footer for bogey. He scrambled again at the 12th with a 6-footer for par and salvaged his advantage at the 14th hole after finding the fescue with his drive.

With Tommy Fleetwood – who became the sixth player to shoot 63 in a U.S. Open to settle into the clubhouse lead at 2 over par – watching from the range, Koepka walked to the 72nd tee with a two-stroke advantage. There was no suspense, no moments of anxiety, no reason to think he would allow this opportunity to slip away.

For all the complaints about Saturday’s setup, which even USGA CEO Mike Davis said were justified, this was the kind of U.S. Open Koepka relishes.

“This week is just back to a typical U.S. Open, where 1 over par wins the golf tournament,” said Koepka, who closed with a 68. “It's just a lot of grinding. But I couldn't be happier with the way I played.”

This was special. Special because he outplayed Johnson, who closed with a 70 to finish in third place at 3 over. Special because of the workmanlike performance Shinnecock Hills demanded. And special because the last year hasn’t exactly been a celebration.

Toward the end of 2017, Koepka began to feel pain in his left wrist. He would miss the Masters with a partially torn tendon and spend 3 ½ maddening months on his couch recovering.

“We were worried that he wasn’t even going to be able to come here and defend,” said Koepka’s father, Bob. “I’m just thankful that he’s been able to recover. It’s been a long three months for him.”

Although he didn’t start hitting full shots until the Monday after the Masters, his return to competitive form was nothing short of meteoric, even by modern standards. And when he finished runner-up at last month’s Fort Worth Invitational, just his fourth event back, his confidence quickly returned.

“He’d never really been a golf nerd and I think he fell in love with golf again,” Harmon said. “When he came back there was something I hadn’t seen with him wanting to play again. He watched the Masters. He never watches the Masters.”

He also was back in the gym, alongside Johnson, rekindling the duo’s ongoing bout of one-upmanship. Early Sunday during their pre-round workout it was the status quo for Koepka and Johnson, friendly banter that both lightens the mood and inspires excellence.

But it was different once the two set out for the final round. There were no jokes, no trash talking, no talking of any kind, in fact.

“I love Dustin. He's one of my best friends,” Koepka said. “To play alongside him, it was fun today. I was excited about it. I figured he would be the guy to beat. But I didn't talk to him today. Maybe I said something on [No.] 3, and that was about it.”

There will be plenty to talk about next week when they renew what is one of the game’s most unique friendships and rivalries. Koepka won’t ascend to No. 1 in the world just yet, but he will hang a banner in Diovisalvi’s gym – 2018 U.S. Open champion – and Johnson wouldn’t miss that moment.