Bryson DeChambeau goes on attack, but Augusta National bites back 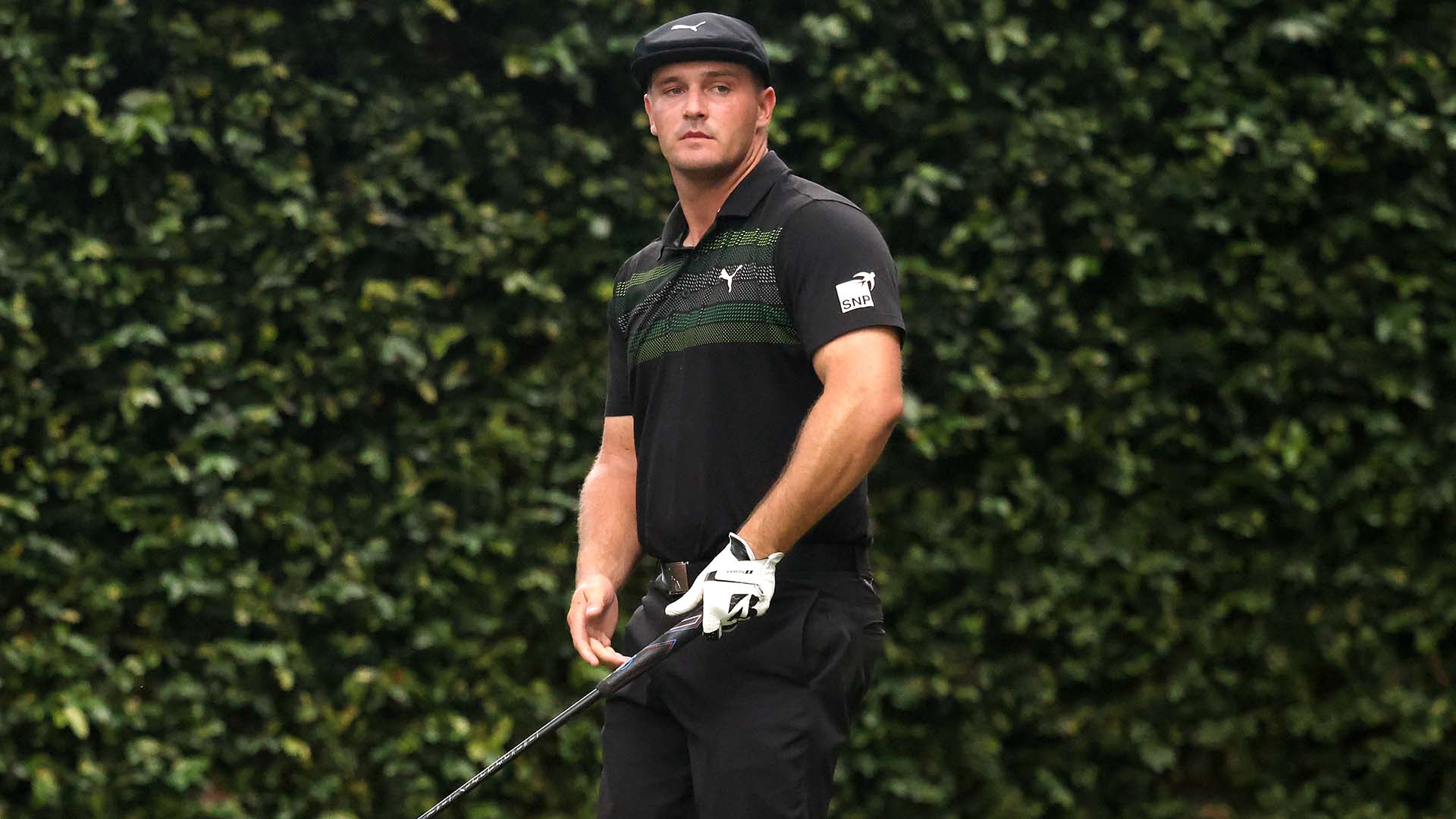 Bryson DeChambeau should have been second to play here at Augusta National’s shortish par-4 third hole, but the green wasn’t yet clear. He’d already unsheathed driver, no hesitation, and waited anxiously as Louis Oosthuizen smoothed a fairway wood into position.

That’s when DeChambeau teed up his ball and started bouncing backward, like a boxer in his corner who was sizing up his opponent.

Behind his ball he took two mighty lashes, activating his muscles.

In preparation for liftoff, he kept deeply exhaling – so deeply that Jon Rahm, kneeling by his bag, couldn’t help but smirk.

And in the final seconds before pulling back the club, DeChambeau snarled at his ball, as if that little white thing was just sitting there, mocking him.

Then came the explosion.

And, ultimately, the frustration, when he saw his ball splat 15 yards short of the green.

Clearly still amused by the theatrics, Rahm turned to engage. “Well, I got it there yesterday,” DeChambeau boasted.

For all the handwringing over what he might do to this national treasure, it’s worth noting what happened next: DeChambeau nipped his pitch shot to 5 feet and then missed the slippery putt down the hill, settling for just a measly par. That was emblematic of his entire round: A whole lotta bluster, but little to show for it.

It’s clear, through both his words and his actions, that DeChambeau had a very clear strategy this week at the 84thMasters. Overpower. Overwhelm. But on a day that should have significantly favored him, with soaked fairways and Charmin-soft greens, DeChambeau needed to birdie the last two holes just to get in the house with a 2-under 70, putting him five shots off Paul Casey’s early lead.

“This golf course, as much as I’m trying to attack it, it can bite back,” DeChambeau said. “It’s still Augusta National, and it’s the Masters. It’s an amazing test of golf no matter what way you play it.”

Oh, and we’d heard all about the way he’d attempt to play it. He’d experimented for the past five weeks – even up until late Wednesday – with a 48-inch driver, the maximum length allowed under the Rules of Golf, in an attempt to produce 144 mph clubhead speed and 350-yard carries. (“I don’t feel like I’m 100% ready with that yet.”) For months he’d talked about his aerial strategy, about how he was going to clear all the trouble and leave yardages into these treacherous greens that haven’t been seen in a generation, since Tiger Woods tore up this place in 1997.

To be sure, there were some moments of brilliance in Thursday’s opening round.

How DeChambeau had only a 7-iron into the par-5 15th, when Oosthuizen hit 7-wood. (Birdie.)

How DeChambeau sailed his drive all the way to the flat on the ninth, giving him just 109 yards left up the hill. (Birdie.)

How he easily cleared the deep bunkers on the left side of the 495-yard fifth hole.

Said Rahm, laughing: “There were a couple of them that were reality checks (for me).”

Even without any roll, DeChambeau hit hybrid into the uphill, par-5 eighth and had no more than 7-iron into the other three longest holes.

On eight par 4s he had 150 yards or less for his approach.

And yet, he didn’t have total control of his driver, averaging 334 yards off the tee but finding just eight of 14 fairways. Unlike at Winged Foot, where an errant drive put him in ankle-high rough that he was strong enough to escape from, DeChambeau was forced to delicately navigate through the trees on six holes, with varying degrees of success. 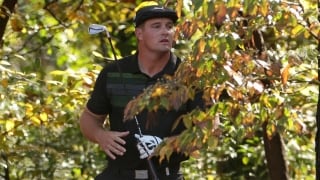 Bryson DeChambeau didn't dismantle Augusta National on Thursday, but was happy to just be under par.

Never was DeChambeau riskier than with his second shot on 13. For all the talk about how he would try to blast his tee shot into the 14th fairway, leaving no more than a flip wedge, he was 50 yards short of that goal on Thursday. In the pine straw down the right tree line, it seemed obvious he’d punch out to his favorite wedge distance and try to get up-and-down for birdie; he didn’t even really seem to weigh his options, turning his back to the flag and picking grass clumps out of his spikes. But then, to some surprise, he settled in over his shot with a 7-iron. With the ball above his feet, his pull-hook flew the bunker and dove into the azaleas long and left of the green. Believing that ball would be lost, he tried again ... and this time flared his shot into the creek. Fortunate to find his ball in the bushes and take only an unplayable, DeChambeau squandered his good fortunate by flubbing his pitch shot, leading to an ugly double-bogey 7.

“I’m greedy,” he said as way of justification. “Sometimes I can get a little greedy, and I like taking risks. You’ve got to take risks to win tournaments, and albeit I made double from it, I still think over the course of four days, I can get that back to under par.”

Just as bold was his play from the trees on No. 7, when his shot ripped under one branch, between two others and over the last one before airmailing the green, leaving an impossible pitch to a tucked pin that led to a bogey.

“I tried to take on some risk today,” he said. “It didn’t work out as well as I thought it would have, but at the end of the day I’m proud of myself for the way I handled myself and finished it off. Birdieing 8 and 9 was a testament to my focus level and wanting to contend here.”

At the beginning of the week, DeChambeau said he’s personally viewing Augusta National not as a par 72, as it states on the scorecard, but rather as a par 67. Destroy the par 5s, then pick up another shot on – for him – the drivable third hole.

Ah, yes, because under normal tournament conditions – or before the deluge that hit the area around 7:45 a.m. Thursday, prompting a nearly three-hour delay – DeChambeau planned to sky a 3-wood onto the right side of the green for an easy birdie.

At a long-ago Champions Dinner, Gary Player once asked Bobby Jones the secret to playing No. 3, since he could never make birdie there.

“You’re not supposed to birdie the third hole,” Jones replied.

Retelling the story, Player said of DeChambeau’s approach: “He’d be turning over in his grave now.”

Augusta National yielded several good numbers, yes, but for one day, at least, it also humbled the burly basher who was supposedly about to break it.