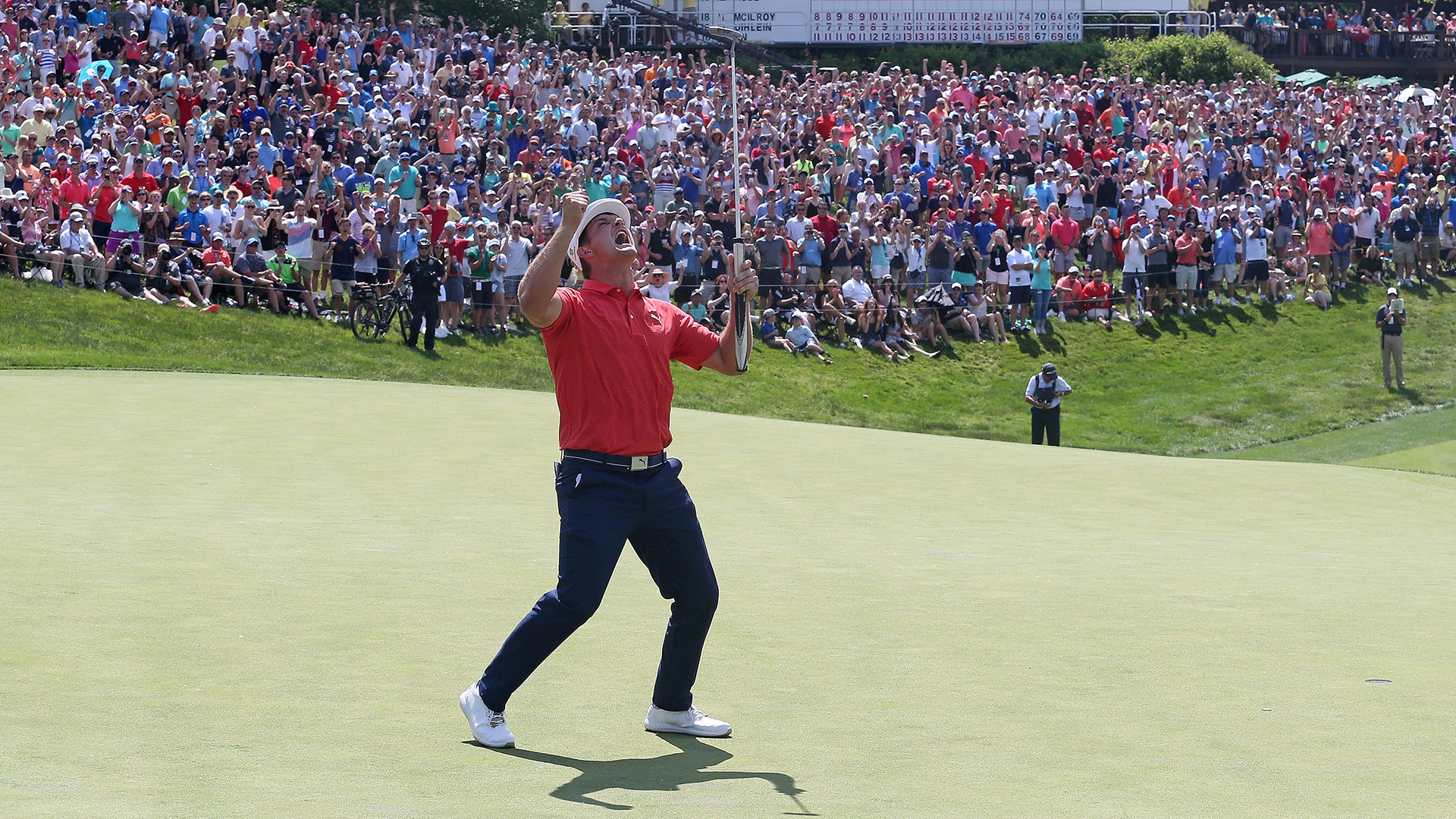 Bryson DeChambeau birdied the second extra hole to win a three-way playoff and take the title at the Memorial Tournament. Here’s how DeChambeau wound up shaking Jack Nicklaus’ hand on Sunday.

What it means: This is DeChambeau’s second PGA Tour victory following his breakthrough last summer at the John Deere. Up one to start the day, he fell down early to Cantlay, but later regained his lead and took a one-shot advantage into the last two holes. DeChambeau would have won with a 72nd-hole par but missed an 8-footer. On the second extra hole, he found the fairway, hit the green, poured in the birdie putt and pumped both fists. The victory moves DeChambeau to fourth in the FedExCup points race and comes with a three-year PGA Tour exemption.

Best of the rest: Stanley made four birdies in a row on Nos. 14-17 to tie DeChambeau at 16 under heading to the final hole. After it looked as though he had hit an ideal drive down the right side of the fairway on 18, his ball clipped a tree, ricocheted across the fairway and came to rest in thick rough 200 yards from the green. Unable to save his par for what would have been the win, he settled for bogey and the playoff. On the first extra hole, he missed the fairway wide right and once again failed to save his par, eliminating him from the playoff. An, separately, backdoored his way into the playoff when Stanley and DeChambeau bogeyed 18 in regulation. An’s chances appeared on life support when he sailed his approach on the second extra hole into the gallery, but a fabulous flop shot looked as though it was about to force a third playoff hole. Moments later, DeChambeau ended it.

Biggest disappointment: Cantlay raced out to the solo lead with birdies on four of his first eight holes. Unfortunately, this season’s Shriners winner would play the remainder of the golf course a birdie-free 3 over to miss the playoff by one.

Special finish: Playing his fifth PGA Tour event as a professional, 19-year-old Joaquin Niemann wrapped up special temporary status for the remainder of the year when he birdied the 72nd hole with Jack watching. The former top-ranked amateur in the world shot 1-over 73 Sunday to finish T-6 at 12 under par. Since turning pro, Niemann has two missed cuts and three top-10s.

Tiger watch: Woods traded three birdies and three bogeys in an even-par 72, a round once again highlighted by his struggles with the putter. A 9-under total left him in a tie for 23rd, giving him his sixth top-25 finish in nine starts.

Round of the day: Louis Oosthuizen went out early and marked down eight birdies and a single bogey to card a 7-under 65 that jumped him up 39 spots into a tie for 13th at 10 under.

Shot of the day: DeChambeau’s birdie putt on the second extra hole.

Quote of the day: “I can’t even describe it. Just to win his event is an honor. He’s the greatest to play. I’m speechless, honestly.” – DeChambeau