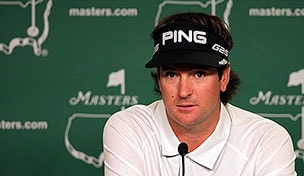 He joked last year that he was going to serve Waffle House fare. Last month he promised that it’d be “food” and said Tuesday that he told only Augusta National members what he was serving. He wasn’t even sure if he ever discussed the menu with his wife Angie.

Watson sent out a photo Tuesday night via his Twitter account that showed the menu signed by all 30 former champions in attendance.