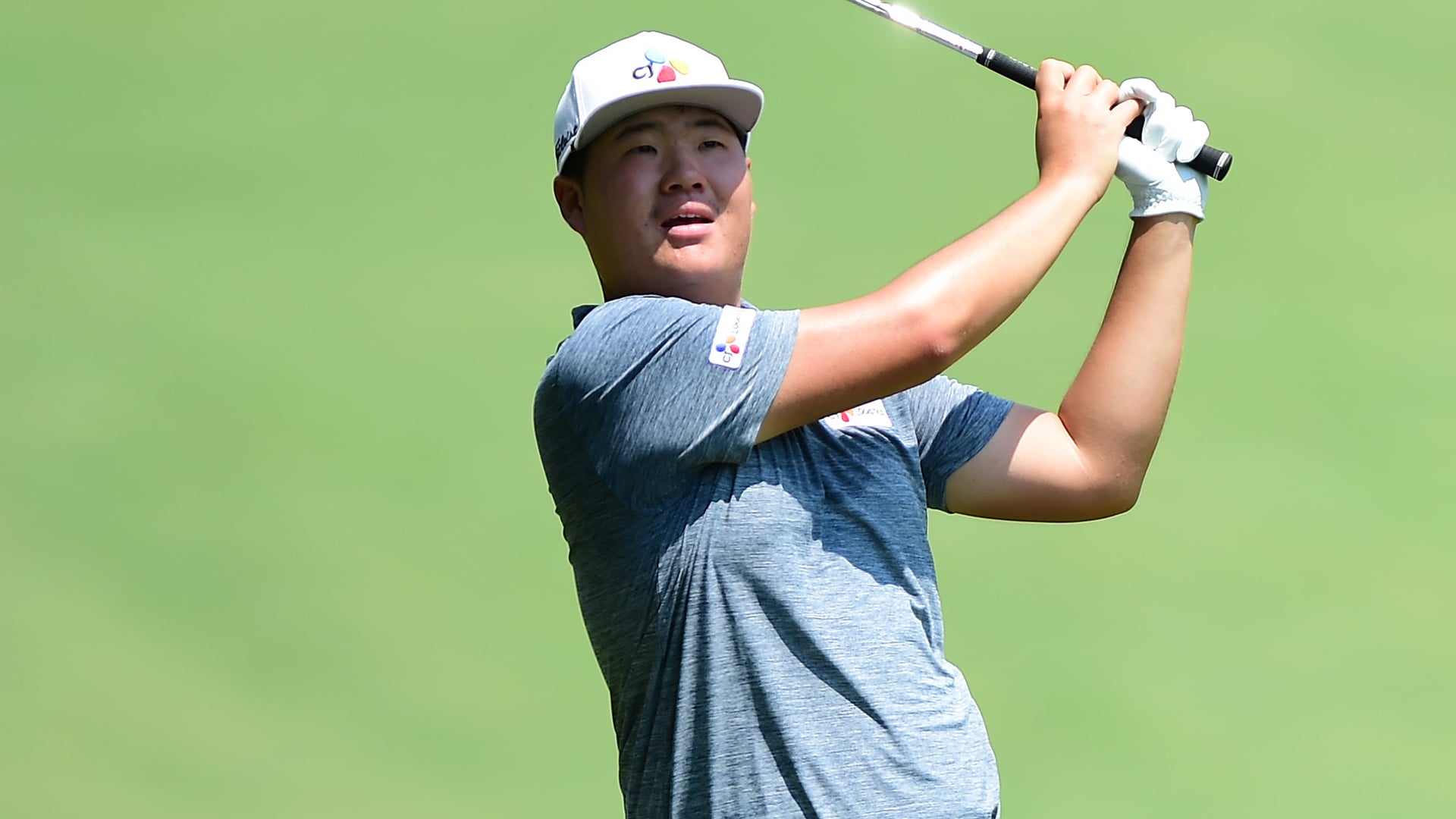 GREENSBORO, N.C. – Byeong Hun An and Sungjae Im each shot 8-under 62 on Thursday to share the lead after one round at the Wyndham Championship.

Mackenzie Hughes, Rory Sabbatini, Patrick Rodgers and Johnson Wagner were a stroke back behind the South Korean leaders in the final PGA Tour event before the FedEx Cup playoffs.

The co-leaders shot the best rounds of their PGA Tour careers. An, a 27-year-old South Korean seeking his first career victory on tour, closed with birdies on four of his final six holes and a sand save on the par-4 18th.

An had four birdies on the front nine at Sedgefield Country Club along with those four on the back nine during his bogey-free round. He hit 15 greens in regulation.

"I've got to do a couple more of these rounds," An said. "One good round won't do it, so I need to keep it up and make a lot of birdies."

Im, one of nine players in the field with a chance at finishing in the top 10 on the points list and earning some bonus money as part of the new Wyndham Rewards Top 10 program, had three straight birdies on Nos. 14-16 and also was bogey-free. He started at No. 25 on the points list.

For a while, it looked as though Spieth would join them atop the leaderboard - teeing off on No. 18 one stroke behind the leaders, but he sent his drive out of bounds. After taking the penalty stroke, he placed his fourth stroke 21 feet from the flagstick and rolled in that putt for arguably the best bogey of the day.

"I got up there and had a putt at it, I was just trying to get the right speed," Spieth said. "And 5 feet to go, it looked really good, just like they did all day."

Spieth had just 23 putts during his round.

"You want putts for birdie. You want to be hitting greens in regulation," Spieth said. "Really, two bad swings today kept it from being my lowest round on the PGA Tour. There's a lot of good in that."

At No. 67 on the points list, Spieth - the 2015 FedEx Cup champion - is in no danger of missing the postseason.

Others at Sedgefield aren't so secure.

The top 125 qualify for The Northern Trust next week at Liberty National, and are assured of keeping their tour cards for next season, if they don't already have them.

Garnett, who started at No. 121 on the points list, and Power, who is No. 144, are among those who are squarely on the playoff bubble.

"I know if it doesn't go well where I'm going," said Josh Teater, who is No. 165. "So I kind of made that up ... in my mind a few weeks back that, hey, if I make all three cuts and finish 40th, it makes no difference, so let's go try to play great and if we end up playing terrible, it doesn't matter."

The other main subplot at Sedgefield is the chase for the top 10 and the remaining $5.3 million in bonus money that is still up for grabs. The top three spots have been locked up.

Paul Casey, who at No. 8 on the points list is the highest-ranked player in the field. Eight other players, including Simpson, began the tournament with a shot at climbing into the top 10 and claiming some of that bonus cash.

"I sound free-wheeling and I am, I'm very kind of in a position where I can only improve my position in the FedExCup and maybe grab a bigger Wyndham Rewards than I already kind of got," Casey said after his 65. "It's not locked up, there's still guys that can pass me. But yeah, I want to move up, plain and simple."