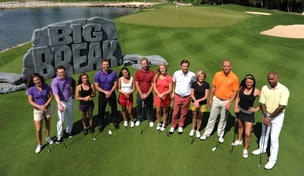 Getty Images
SEVILLE, SPAIN - APRIL 30: Fredrik Ohlsson of Sweden during the second round of the Open de Espana at the Real Club de Golf de Seville on April 30, 2010 in Seville, Spain. (Photo by Ross Kinnaird/Getty Images)  -

ORLANDO, Fla. – The cast for the next season of Golf Channel’s Big Break reality competition was revealed Tuesday, featuring 12 professionals ready to pursue their dreams of playing on either the LPGA or the PGA Tour. “Big Break Mexico” premieres May 13 at 9 p.m. ET.

Filmed at Iberostar Playa Paraiso Golf and Spa Resort in Riviera Maya, Mexico, “Big Break Mexico” will feature a cast of six men and six women competing in a mixed-team format. They will compete in various golf-related skills challenges, with an exemption to compete either on the LPGA at the 2013 Lorena Ochoa Invitational or on the PGA Tour at the 2013 OHL Classic at Mayakoba, cash and other prizes.

Taylor Collins (23, Ft. Lauderdale, Fla.): One of the younger competitors, Collins is in her sophomore season on the Symetra Tour, following an up-and-down rookie season that was highlighted by a fourth-place finish in her third event. Collins is a long-time student under Hall of Fame instructor Bob Toski, who first met Collins when she was in elementary school and gave Collins her first set of lessons.

Matthew Galloway (27, Tampa, Fla.): Former caddie for two-time U.S. Open champion Lee Janzen, Galloway has competed on various mini-tours all over the country during the past five years. A three-time Division II All American from the University of West Florida, Galloway is returning to the mini-tour circuit full time in 2013 with the experience, insight and guidance from walking the fairways on the PGA Tour with Janzen.

McKenzie Jackson (24, Scottsdale, Ariz. / Uniontown, Ohio): Playing in her second full season as a professional, Jackson is competing on the Cactus Tour, Canadian Women’s Tour and Women’s State Opens with a fresh outlook on golf after a frustrating 2012 season that included a break from the game at the end of the year. A graduate of Kent State University, Jackson received the phone call that she was cast on “Big Break Mexico” two days after she began refocusing on her game after an extended break.

Stefanie Kenoyer (24, Lighthouse Point, Fla.): The lone contestant on to have competed in a major championship (2009 U.S. Women’s Open) Kenoyer is playing full time on the Symetra Tour. Sara Lynn Sargent – her former college coach and competitor on “Big Break VI: Trump National” – encouraged Kenoyer to apply. Kenoyer will be looking to follow in the footsteps of Sargent, who earned her LPGA card the following season after being on Big Break.

Liebelei Lawrence (29, Nideranven, Luxembourg / Nashville, Tenn.): The first female from Luxembourg to compete on the Ladies European Tour (2011 and 2012), Lawrence credits her renewed passion for golf as a result of being cast on the show. She lost her status on the LET after the 2012 season and battled back injuries the entire season, causing her to consider hanging up her professional career.

Chad Schulze (34, Cockeysville, Md. / Lebanon, Pa.): Schulze is returning to competitive golf in 2013 after a few years on the business side of golf as a PGA of America Apprentice. A member of Pennsylvania’s Millersville University Hall of Fame, where was a Division II All American, Schulze is competing on Big Break because he needs that extra push to make it to golf’s highest stage.

Jason Seymour (36, Los Angeles): Seymour is returning to competitive golf full time for the first time in nine years, following a motorcycle accident that almost claimed his life. He hung up the golf clubs and turned to a successful construction business. Growing up in suburban Los Angeles, golf provided him a way out of “the bad things that surrounded me” and he has dreams of giving back to the game that has meant so much to him. He also is competing with a heavy heart as his father passed away three weeks prior to the filming of the series.

Emily Talley (22, Boulder, Colo. / Napa, Calif.): The youngest competitor, Talley is one of two contestants on the series to have played in an LPGA event. A graduate of the University of Colorado where she was an honorable mention All American, she turned professional after graduation in 2012. She is competing full time on the Symetra Tour in 2013.

Rob West (41, Peoria, Ariz.): The oldest competitor, West is returning to competitive golf after a 10-year hiatus to work in the construction business and raise a family. A multiple winner on the various mini-tour circuits in the 1990s, West is giving professional golf one final push.

Golf Channel’s Tom Abbott and Stephanie Sparks return as co-hosts for the series, which will feature a guest appearance from former LPGA world No. 1 Lorena Ochoa, who surprised the cast during the filming of the series and competed alongside the players in one of the challenges.

“I love having Big Break in my home country of Mexico and am proud to offer an exemption to the Lorena Ochoa Invitational,” Ochoa said. “Big Break is very popular, and I want to help the sport of golf in my country as much as I can. This is a win-win situation for all of us.”