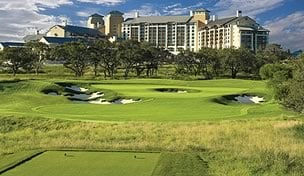 For starters, there are not as many runoff areas around the greens and fairways.

The rough is lighter, down from three inches to about two.

The fairways at Nos. 1 and 4 were widened.

A few greens have been renovated, most notably at the par-4 12th, which used to feature one of the most severe (and some would contend unfair) putting surfaces in terms of slope. That hole produced the most three-putts on Tour last year, with 44.

Some changes are more noticeable than others. Matt Kuchar toured the place Tuesday and didn’t know the course had even been touched until he was informed by a reporter.

Said defending champion Ben Curtis, “No. 12 was a big difference because … in the past, there was only 12, 15 feet of green there. Then if you didn’t get it up there, it was either 20 yards over the green or it was 45 feet short of the pin.”

“I think you’ll see a little bit lower scores this year,” Curtis said, “and guys will probably get a little more aggressive than in the past.”