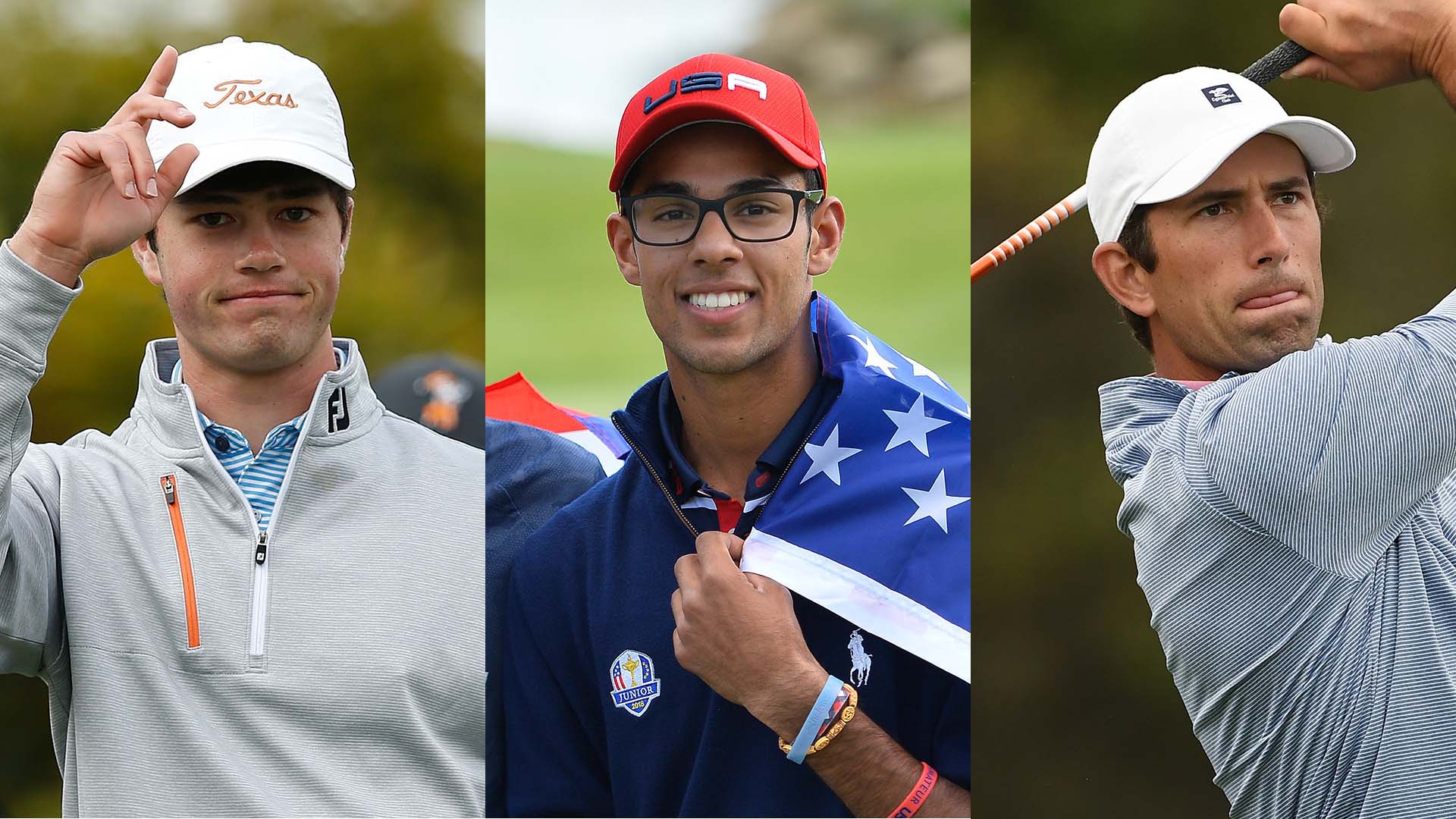 Three players were officially named to the 2019 U.S. Walker Cup team on Wednesday.

Cole Hammer, Akshay Bhatia and Stewart Hagestad received nods as the top three Americans in the World Amateur Golf Ranking, exemptions introduced this year as part of changes in the USGA's selection process. The rest of the 10-man team, captained by Nathaniel Crosby, will be named following next month's U.S. Amateur at Pinehurst, which ends Aug. 18.

Other automatic exemptions would include the U.S. Amateur champion and McCormack Medal winner, provided the winners are American. The latter player likely will be Hammer, who is currently No. 1 in the world. Bhatia is the next American at No. 4, followed by Hagestad at No. 5.

Hammer, 19, was a semifinalist at last year’s U.S. Amateur, which followed his victory at the 2018 Western Amateur. He also won the Phil Mickelson Award as the nation’s top freshman last season while helping Texas to the NCAA final. He's played sparingly this summer but did tie for fourth at the Northeast Amateur in June.

Bhatia won the Jones Cup in February, following a year in which he won several high-level junior tournaments, and recently tied for 10th at the European Amateur. At age 17, Bhatia will be the youngest U.S. player to ever play in a Walker Cup. The last Americans to play a Walker Cup before hitting a shot as a college player were Jordan Spieth and Patrick Rodgers in 2011. (Bhatia plans to turn pro and skip college golf after this year's matches.)

Hagestad, 28, won the 2016 U.S. Mid-Amateur and was low amateur at the 2017 Masters. He's qualified for each of the past three U.S. Opens, too. This summer, he's finished runner-up at the Northeast Amateur and Players Amateur. He will be the only member of the 2017 U.S. Walker Cup team to play this year. Two years ago, Maverick McNealy was a back-to-back Walker Cup participant.

This year's Walker Cup is set for Sept. 7-8 at Royal Liverpool in England. The U.S. leads the all-time series, 36-9-1, and is coming off a 19-7 rout two years ago at Los Angeles Country Club. However, Great Britain and Ireland has won five of the past six Walker Cups contested overseas.

On paper, the American side figures to have the advantage, especially with three top-5 players already named to the team. There are just four GB&I players ranked in the top 25 of the WAGR. The Americans have 11 players ranked 25th or better, including No. 7 Brandon Wu, No. 8 Steven Fisk and No. 10 Chandler Phillips. (To compare, the 2017 U.S. team had seven players ranked 12th or better in the world.)

Wu and Fisk likely have already done enough to hear their names called on Aug. 18 while there are easily 10-15 other players who could warrant consideration for the remaining spots on the U.S. team.

Wu, a Stanford grad, went 3-0 in NCAA match play for the national-champion Cardinal before qualifying for both summer Opens. He was the first player since Joe Carr in 1967 to accomplish the latter feat. He tied for 35th at Pebble Beach before missing the cut at Royal Portrush. He was ranked fifth before Wednesday's WAGR update, falling two spots after his 2017 Porter Cup win dropped out.

Fisk won six times last season as a senior for Georgia Southern and was runner-up at the NCAA Championship. He made a Korn Ferry Tour cut this summer and followed with a top-10 at the Players Amateur.