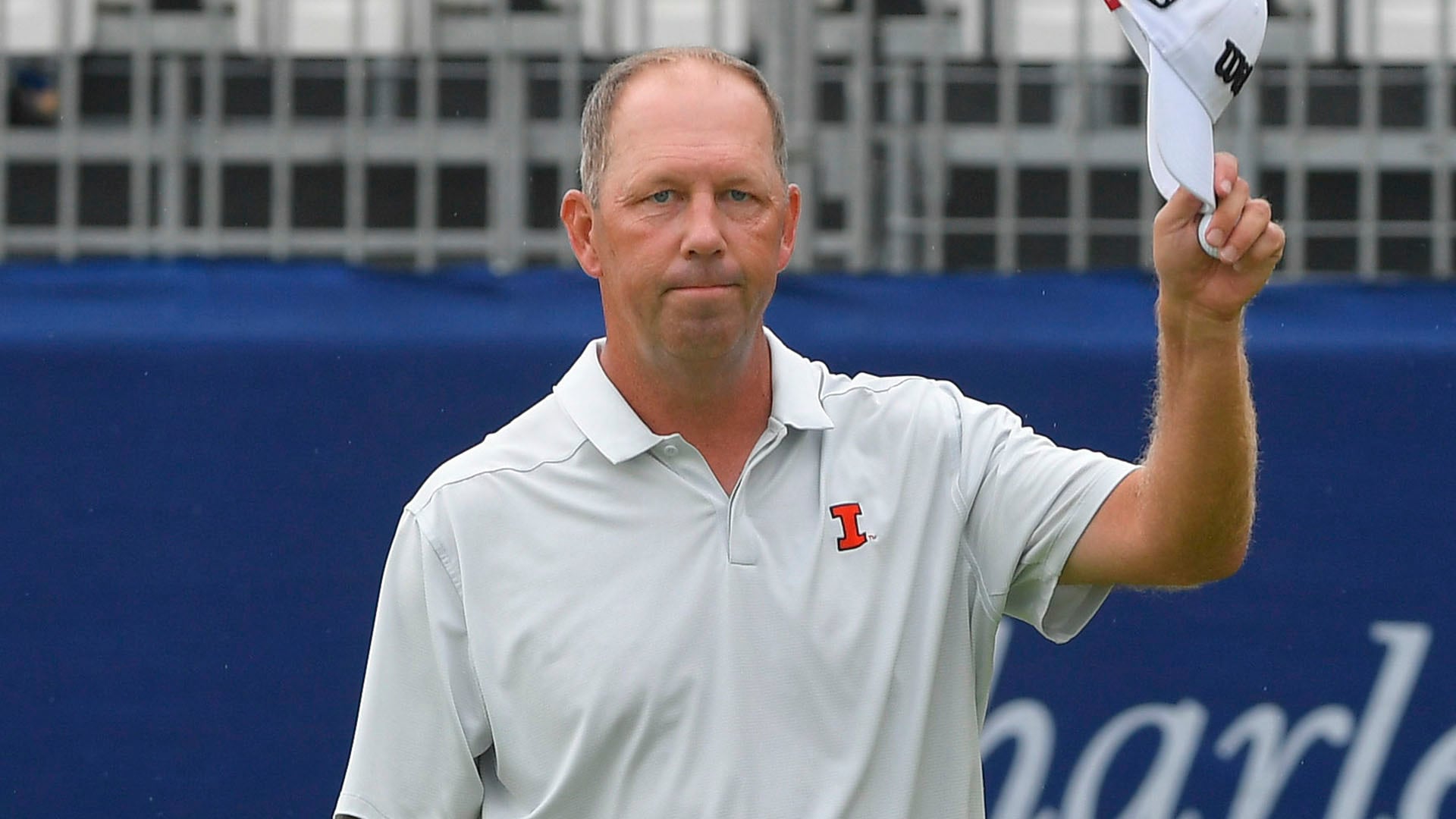 Steve Stricker, if you’re reading this, it’s time to make a statement. It’s time to strengthen your staff for the 2020 Ryder Cup at Whistling Straits. It’s time to name Illinois coach Mike Small an assistant captain.

It would not only be an unprecedented move, but it would be the right one.

Small, who played college golf with Stricker at Illinois, is regarded as one of the best coaches in college golf. He has led Illinois to Big Ten titles in 14 of his 18 seasons. Under Small, the Illini have advanced to 11 straight NCAA Championships and have made match play five times in the past six seasons, finishing runner-up in 2013.

As a player, Small has competed in 11 majors, making the cut in three PGA Championships. He also won twice on the Web.com Tour in 1997, is a four-time Illinois State Open winner and has captured the PGA Professional National Championship three times.

How cool would it be to have one of the PGA of America’s own, a club pro, playing an important role in its biggest event? (About 20 percent of Division-I head and assistant coaches are PGA members, in case you were wondering.)

Small isn’t just qualified to be one of Stricker’s assistant captains; he’s overqualified. And he’s willing.

Small would bring more to the U.S. team room than most of the former players that annually make up these team-event staffs. Zach Johnson? Not an ounce of experience leading a team. David Duval? Same. Bubba Watson? You get the idea.

Truth is, PGA Tour players spend their entire careers playing an extremely individualistic sport. They have no experience leading a group of 12 golfers with different personalities and egos. College coaches inherit teenagers from all over the world, and the best ones develop those kids into All-Americans and key contributors to NCAA-title-winning teams.

Finding the right pairings and avoiding scenarios such as what happened with Jordan Spieth and Patrick Reed last year in Paris? That’s what college coaches do every day.

“A college coach could help that environment from the standpoint of team culture, team bonding and trying to create a unit that is stronger than the individuals,” Small said. “Captains don’t work with players; they are more on the chemistry side of things. With pairings, it’s more of a dynamic where you put people together who can feed off of each other positively. … College coaches have more experience doing that, so to consult a college coach could prove to have merit.”

Other national teams in other sports do it. Duke’s Mike Krzyzewski coached the USA men’s basketball team for seven years and Villanova’s Jay Wright is currently an assistant for USA basketball. Ken Eriksen, who coaches the softball team at South Florida, has led USA softball since 2011. Stanford’s Greg Meehan and Cal’s Dave Durden will coach the USA women’s and men’s swimming teams, respectively, at the 2020 Olympics.

The USA baseball team isn’t coached by John Smoltz and Ken Griffey Jr. for a reason. And don’t expect to ever see LeBron James or Michael Jordan lead USA basketball.

Now, having a college coach on a Ryder Cup staff shouldn’t be a requirement. But in Small’s case, it definitely fits. As do many other prominent coaches. Imagine future Ryder Cup teams with college coaches such as Mike McGraw, Jay Seawell and Chris Haack at their disposal. Or even former SMU coach Josh Gregory, who won two NCAA titles with Reed at Augusta State.

Those are highly successful leadership minds who have coached many of the American Ryder Cup mainstays. (Ask Rickie Fowler if he thinks McGraw would make the U.S. team better.) If anything, they would bring a different perspective to a team room filled with players unaccustomed to leading.

“We spend our lives doing it, so I think we could provide some great team input,” said one coach at an elite Division I program.

Let it be noted that Small fully supports the current U.S. Ryder Cup system, and he respects Stricker “more than anybody in the world.”

“And I’m never going to lobby or expect for something like this to happen. It’s not my idea,” Small added.

Captain Stricker, it’s up to you. Give Small a call and ask him to join your team. You won’t regret it.

Texas received nine first-place votes and was ranked second in the most recent Women’s Golf Coaches Association poll. For good reason, too.

Head coach Ryan Murphy, now in his fifth year with the Longhorns women’s program, has a national-title contender on his hands. Texas has played one of the nation’s toughest schedules and finished no worse than fourth in six events while winning twice, including most recently at the Allstate Sugar Bowl Intercollegiate, where it beat both No. 1 USC and No. 3 Duke.

“I like where we’re at,” Murphy said. “There’s a lot of talent on this team.”

Depth is certainly not an issue for the Longhorns. Even with two freshmen in the lineup. Even with the midseason departure of Greta Voelker, who had tied for seventh at Texas’ home event, the Betsy Rawls, in the fall before deciding to turn pro.

Six Longhorns are ranked 121st or better by Golfstat, including sophomore Kaitlyn Papp (19), freshman Hailee Cooper (23) and sophomore Agathe Laisne (33). All six of those players have at least one top 10 this season, too.

“Qualifying has been really, really competitive,” Murphy said. “You don’t even really have to motivate them at this point. You kind of just have to sit back and watch the competition sort things out.”

Murphy takes a merit-based approach to qualifying. If a player finishes in the top 12, she is exempt for the next event. A top-4 finish earns spots in the next two tournaments and a win secures a players spot in the following three lineups.

For the Sugar Bowl, there was just one spot up for grabs via qualifying. Senior Maddie Luitwieler, whom Murphy calls the team’s most-improved player this season, earned that spot, battling cold conditions over 36 holes to edge out three of her teammates, including junior Emilee Hoffman, who is ranked No. 62 in the Women’s World Amateur Golf Ranking and will play in the inaugural Augusta National Women’s Amateur.

Luitwieler, playing in the lineup for the first time all season, responded with a T-8 finish to lead Texas to a two-shot win.

“She works her butt off,” Murphy said of Luitwieler.

Texas is gunning for a third straight Big 12 title this spring. Of course, the bigger goal is an NCAA title. The Longhorns have qualified for each of the past three NCAA Championships, but hasn’t finished better than T-12 in any of them.

If things continue, expect that to change this May.

“I’m proud of what we’ve accomplished,” Murphy said. “For our supporters, it’s been very refreshing. Expectations are high and we’re provided with a tremendous amount of resources here.

“We’re back where we’re supposed to be.”

The fact that Dustin Johnson now has 20 career PGA Tour victories didn’t come as a surprise to any of Johnson’s former teammates at Coastal Carolina. He’d always had the talent, they agreed, it just came down to Johnson’s desire and work ethic.

Johnson won seven times in four seasons with the Chanticleers. As a senior, he posted 12 top-10s in 14 starts, including a T-9 finish at the 2007 NCAA Championship, where Coastal finished fifth as a team. He was a three-time All-American, twice being named to the first team.

In a 2017 ESPN feature, many of Johnson’s teammates talked about Johnson, a freak athlete and golfer even back then. What they said was remarkable.

Zack Byrd, a junior on the 2006-07 team: “If Dustin had Tiger's work ethic, he'd blow every Tiger and Jack record out of the water, or burn out in a year and never play again. I don't know which would happen. I've never played golf with Jack or Tiger, but I've played a U.S. Open and I've been out with the best in the world. Dustin's the best player who ever played the game.”

Cameron Hooper, a sophomore that year: “I grew up idolizing Tiger Woods, and I knew Dustin was so much better than Tiger. I just saw a lot more consistency out of Dustin, and for how far he hits it, how straight he hits it, is incredible. My dad loves Jack [Nicklaus], and I grew up with Tiger, but right now, Dustin's the best golfer I've ever seen.”

And Joachim Fourquet, also a junior that season: “When I first came to the U.S. and saw Dustin, I thought his swing was terrible. I thought, 'Who is this guy?' And then I played with him and he shot 65. In Europe, I thought Rafa Cabrera Bello was very good when I played with him, and he has 10 percent of the talent of Dustin Johnson. Dustin's the best player I've ever seen.”

While Clemson senior Bryson Nimmer was playing the weekend at the PGA Tour’s Puerto Rico Open (he finished T-47 in his Tour debut), the rest of the Tigers were making an impact of their own.

Today we teamed up with @ValiantPlayer to bring some sunshine to the Prisma Health Children's Hospital - Upstate on such a gloomy day. pic.twitter.com/LtpABeNkKQ

Two of the top men’s tournaments of the spring will take place March 3-5. The Querencia Cabo Collegiate in Mexico will feature reigning national champion and top-ranked Oklahoma State and the team it beat in the final last spring at Karsten Creek, Alabama, as well as No. 3 Vanderbilt, No. 11 Arizona State and No. 17 LSU, which are all coming off of big wins. The Southern Highlands Collegiate in Las Vegas also boasts a strong field, highlighted by fourth-ranked Georgia Tech and three other top-10 teams, No. 7 USC, No. 8 Texas and No. 9 Oklahoma. On the women’s side, things are relatively quiet until March 9-10 when Florida hosts the Gator Women’s Invitational. 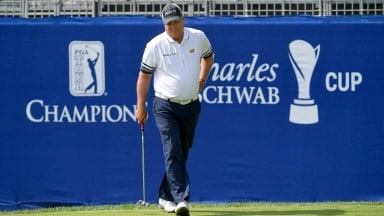 Kenny Perry and Mike Small shot 7-under 65s to share a one-stroke lead in the first round of the Constellation Senior Players Championship on Thursday. 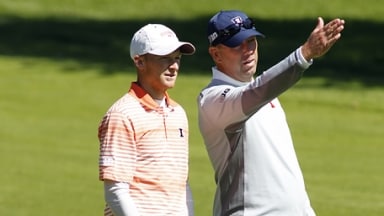 Illinois coach Mike Small, one of the most accomplished PGA pros in the country, is competing in Champions Tour Q-School.

Illinois’ Mike Small on Monday was named the Coach of the Year by the Golf Coaches Association of America.