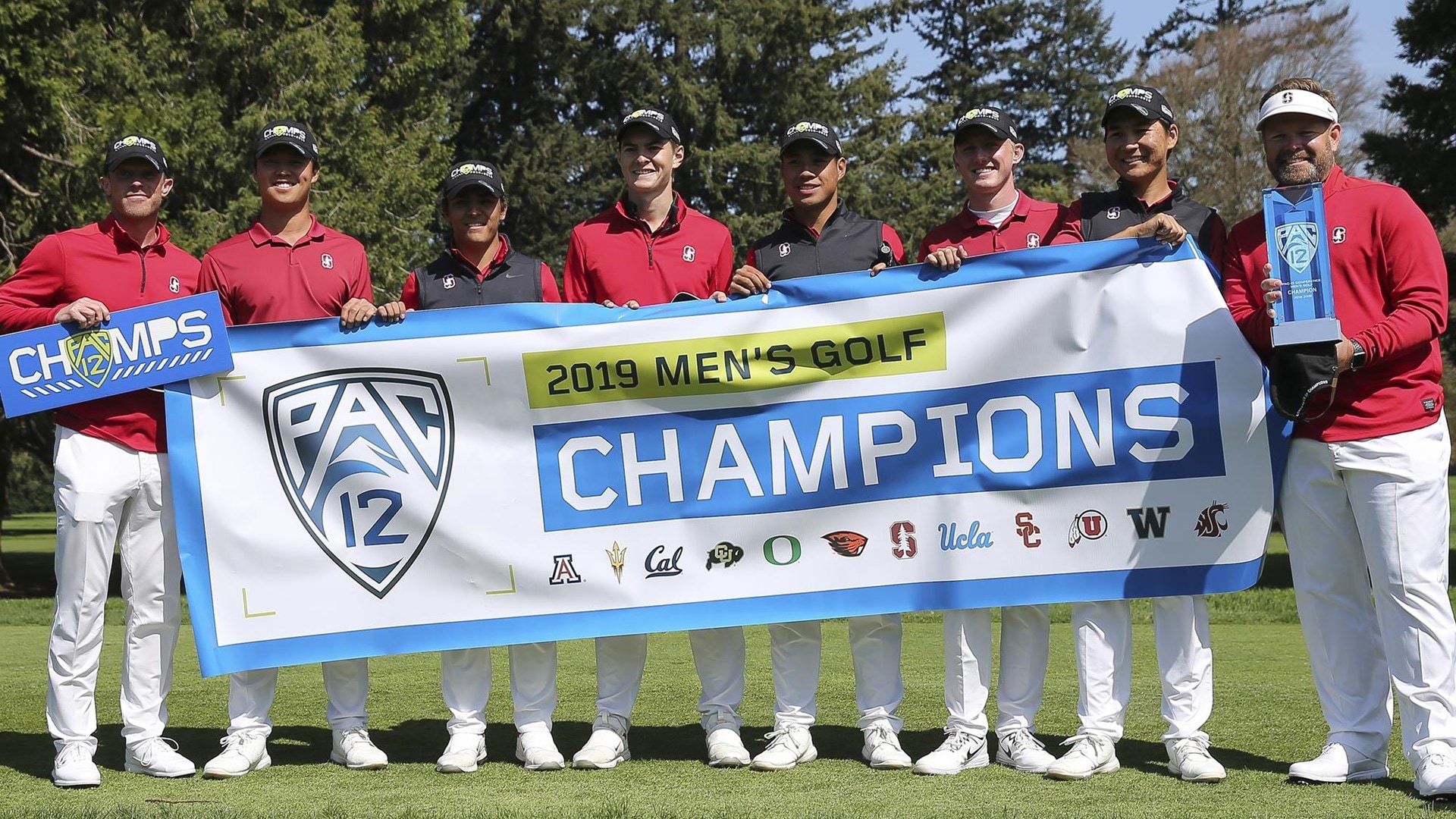 It’s conference championship season in men’s college golf and GolfChannel.com will keep you up to date as each championship finishes, with scores, stats and more for the 31 conferences that award NCAA regional automatic qualifiers.

Stanford prevailed in the six-count-five format for the second straight tournament, following its win at the Western Intercollegiate with a victory at the 72-hole Pac-12 Championship. The Cardinal have not only won three straight events for the first time since the 2013-14 season, but they also have now won 11 Pac-12 titles in school history. Stanford trailed Cal by four shots entering the final round before ultimately winning by eight over UCLA. Isaiah Salinda led the Cardinal with a fifth-place finish. "Momentum is a real thing in team golf and I think our guys are feeling that," Stanford coach Conrad Ray said. "Our guys are motivated to see where we can ride this thing. We have great young team and they are hungry to go win." Cal senior Collin Morikawa won the individual title by four shots. The win marked Morikawa's fifth at Cal but first conference title. Morikawa hasn't finished worse than T-7 this season and has cracked the top 10 in 16 straight tournaments dating to last season. "This is definitely one of the most special wins so far," Morikawa said. "To have the Pac-12s back at Eugene Country Club where the NCAAs were held my freshman year and to come back three years later and win is very memorable. I knew I was playing well this week and just wanted to put everything out there." 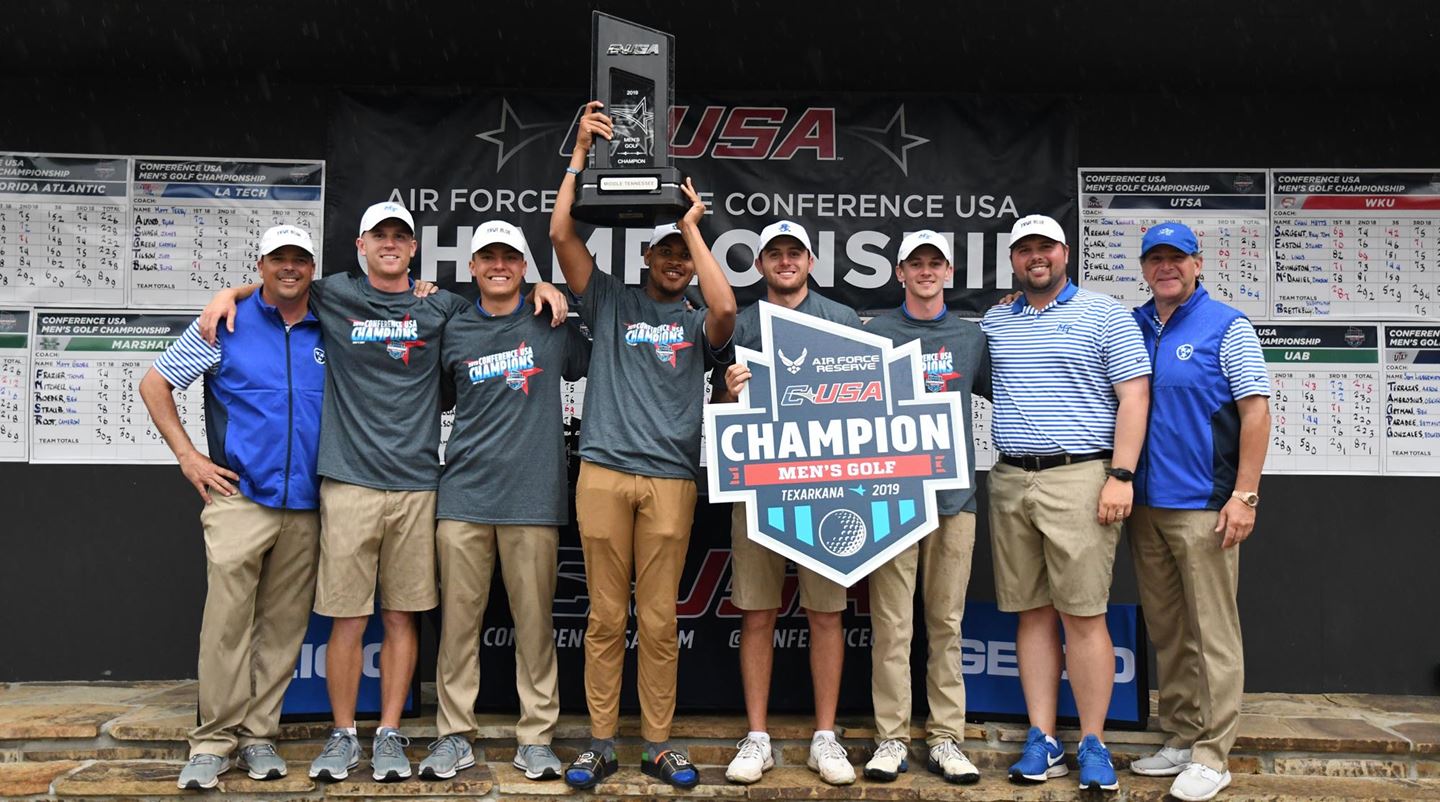 Last summer, Middle Tennessee State lost its coach and several players to Tennessee. But the Blue Raiders responded under new coach Mark McEntire to win its second straight C-USA title. MTSU finished second in stroke play, four shots behind Texas-San Antonio, but after beating Charlotte, 3-2, in the semifinals, the Blue Raiders got the best of UTSA in the final, winning 3-2. Sophomore Cooper Sears, who transferred from Vanderbilt in January, tied for second in stroke play and then won both of his matches, including a 24-hole thriller in the final against UTSA's Michael Rome. "Never in my coaching career have I had a team that fought as hard as this team," McEntire said. "This is the story of the year in college golf." 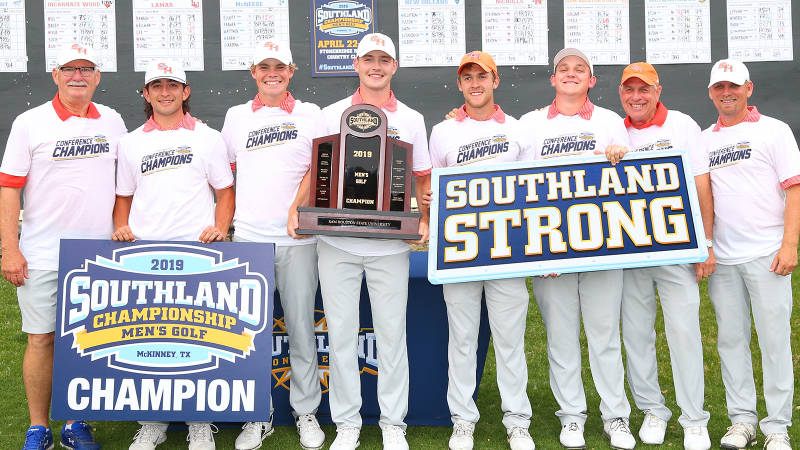 Sam Houston State picked up its second straight Southland title with a seven-shot victory over Lamar in wet and windy conditions. Junior Noah Steele notched his first college win by capturing medalist honors by three shots over McNeese State's Blake Elliott. “I could not be more proud of the way they handled themselves in tough conditions and in the heat of battle,” Sam Houston State coach Brandt Kieschnick sad. “They embraced the challenge today. Last night, we refocused on who we are and what makes us successful. We decided how we were going to go out there today win or lose.” 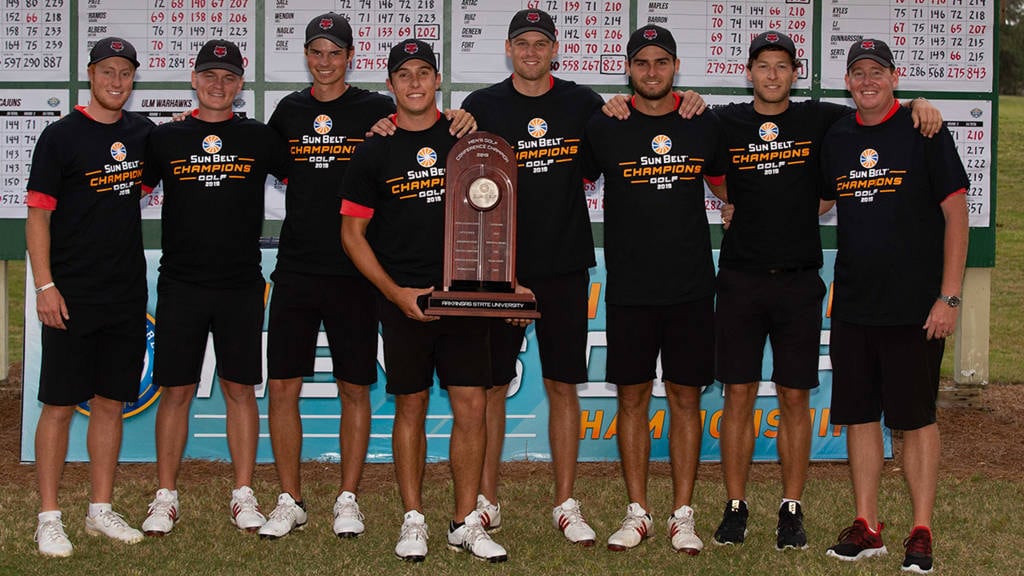 Arkansas State was already looking at an at-large NCAA regional bid, but the Red Wolves left nothing to chance. They finished third in stroke play before beating Coastal Carolina, 3-2, and Louisiana-Monroe, 4-1, in match play. The victory marks Arkansas State's first Sun Belt title and just its second conference crown. The Red Wolves have now won five times this season. “When you look at our qualifiers and the competition we have among our team, I think that played a factor in not only this championship, but our overall success this season," Arkansas State coach Mike Hagen said. "Our schedule strength has also improved every year.  We’ve won some really big events and capitalized on some situations we’ve put ourselves in to beat some very good teams from all across the country, so those are experiences we’ve been able to use.” Georgia Southern Steven Fisk won medalist honors, marking his sixth victory of the season. He also won the Sun Belt individual title as a sophomore. 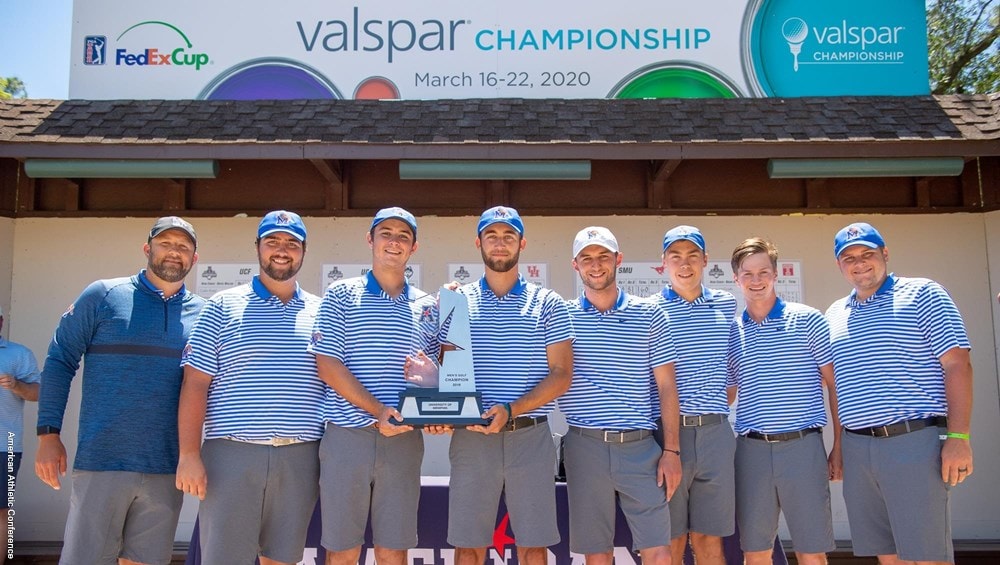 Memphis didn't help the at-large bubble teams by knocking off SMU and South Florida at the American Championship. The Tigers won by 12 shots as they placed four players in the top 12, led by third-place Brad Bawden, who was eight shots back of medalist McClure Messner of SMU. Memphis now has five conference titles, though hadn't won the American since 2012. The team's last regional bid came in 2016. "Wow! The boys played great golf for three days," Memphis coach Blake Smart said. "More importantly, they believed in the process and how we play our best golf. It was an ultimate team win and I couldn't be more excited for the fellas." 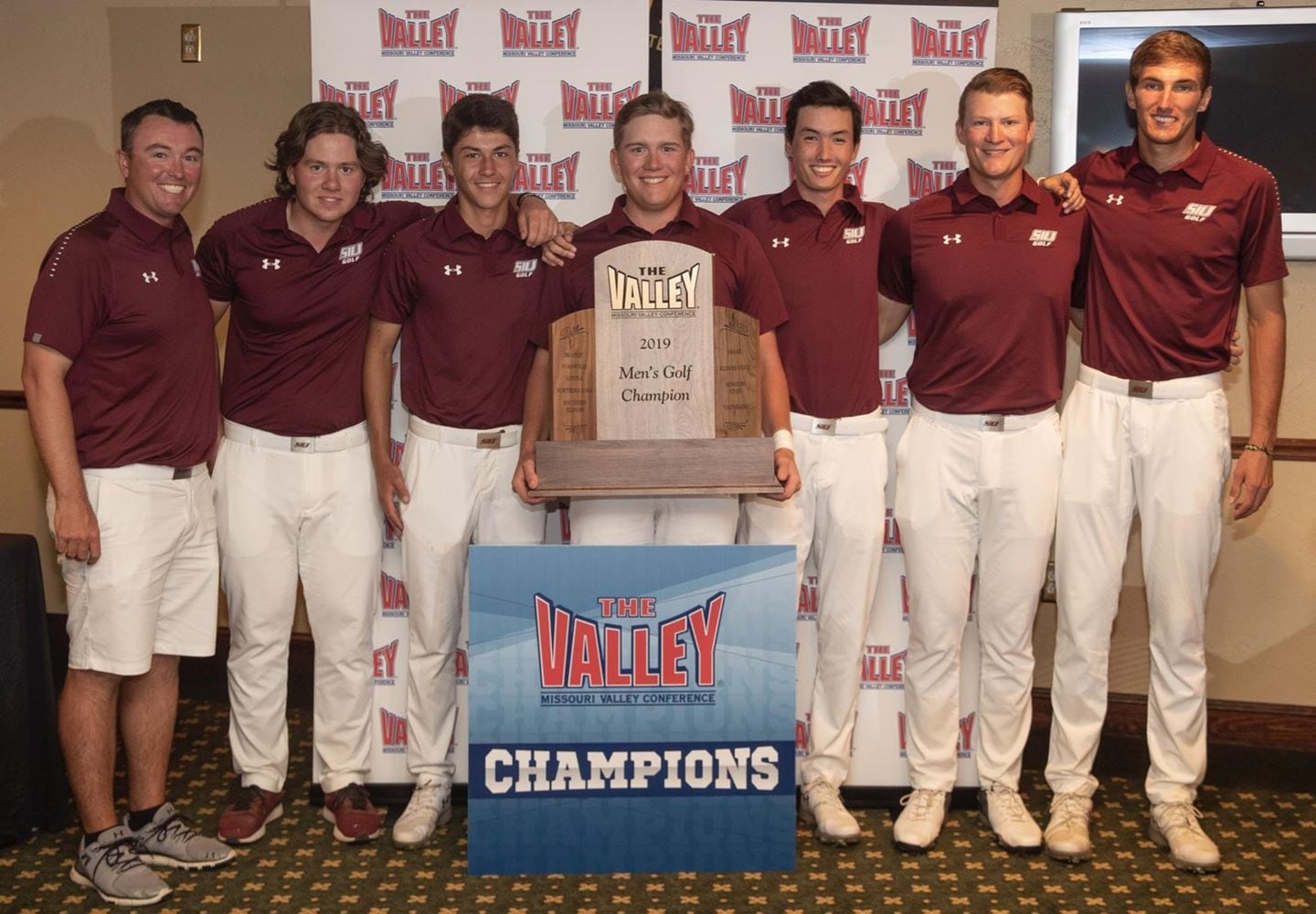 For the second time in four years, Southern Illinois won the MVC title. The Salukis trailed Illinois State by a shot entering the final round before shooting 7 under and winning by 10. "This moment, this opportunity is exactly what we trained for all year long," Southern Illinois coach Justin Fetcho said. "I couldn't be any more proud of how this team stayed mentally tough and executed golf shots down the stretch. It's just a testament to their talent and belief in themselves." 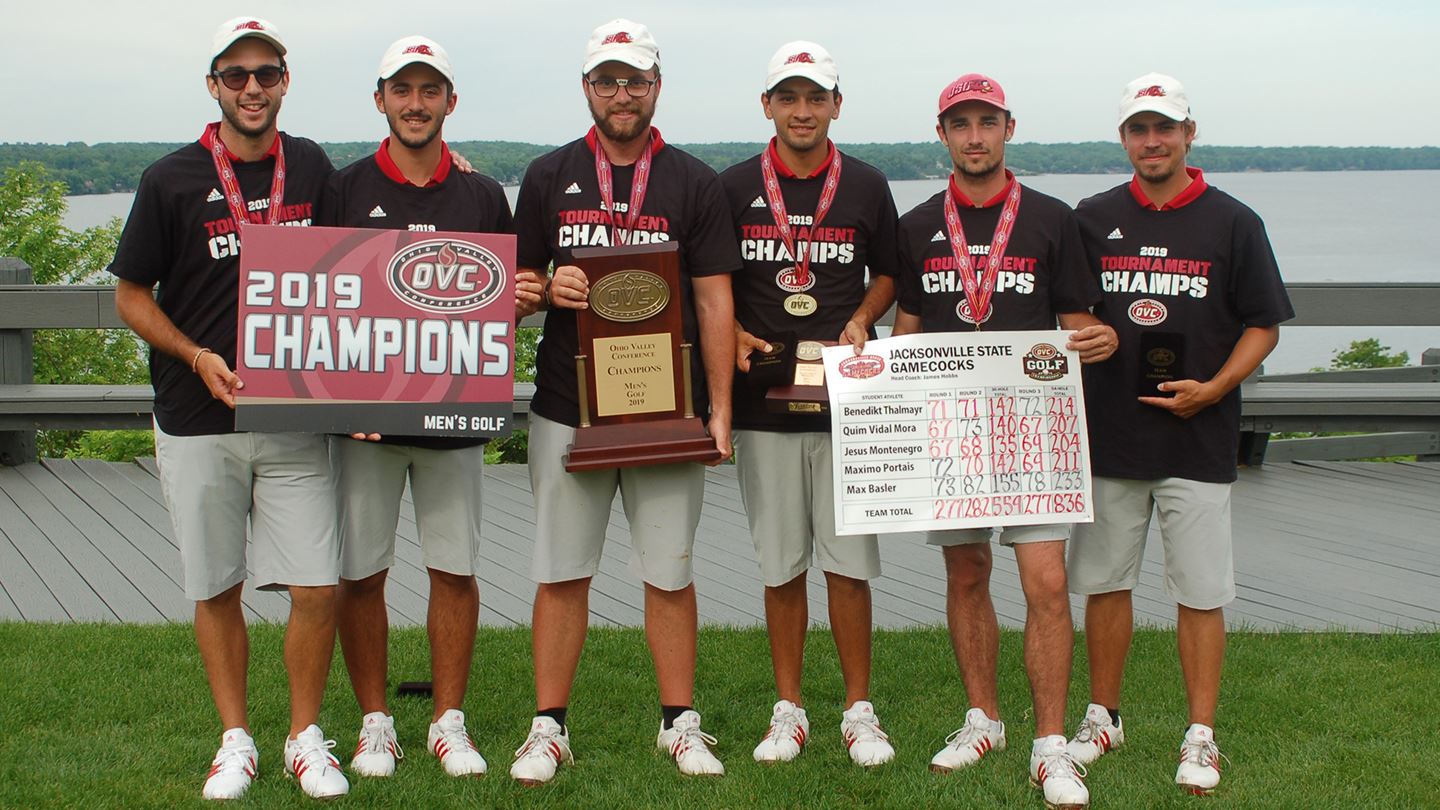 Jacksonville State set an OVC Championship record with a 28-under 836 to beat Belmont by 11 shots and win a third straight conference title. The Gamecocks are the first team to do win three straight OVC titles since Austin Peay State did so in 2001-03 and now have eight total OVC championships. Jesus Montenegro won the individual title by three shots over teammate Quim Vidal Mora. it was Montenegro's first college win. 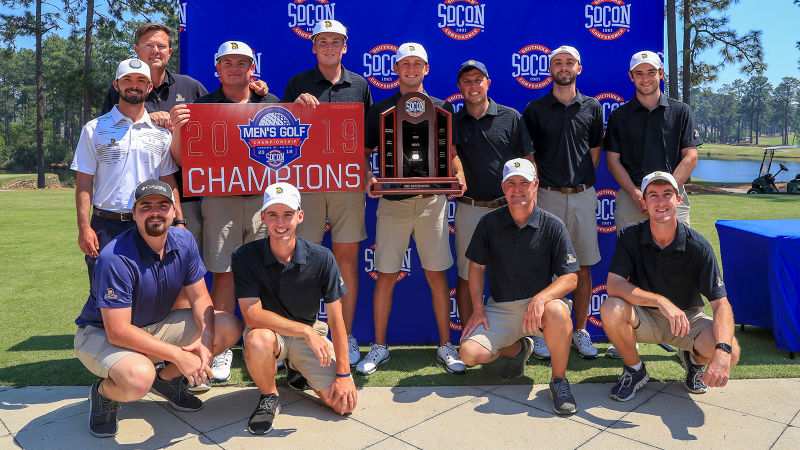 For the first time since 2006, Wright State finishes atop the Horizon League. The Raiders won their sixth Horizon crown with a four-shot comeback win over Northern Kentucky, which they bested by 12 shots in the final round to win by eight. "They put a lot of trust in me and have bought into what I've asked them to do and today was the first time it clicked for all of our guys on the same day," Wright State coach Brian Arlinghaus said. "We got great play from every single one of our guys but more importantly they carried themselves in a professional manner and exuded confidence at all points today.  Our goal was to stick with our individual game plans, stay in our bubble and be disciplined.  I told them last night at our meeting if you can just give me those three things tomorrow that we'd have a good chance at winning this thing. They did and we did." 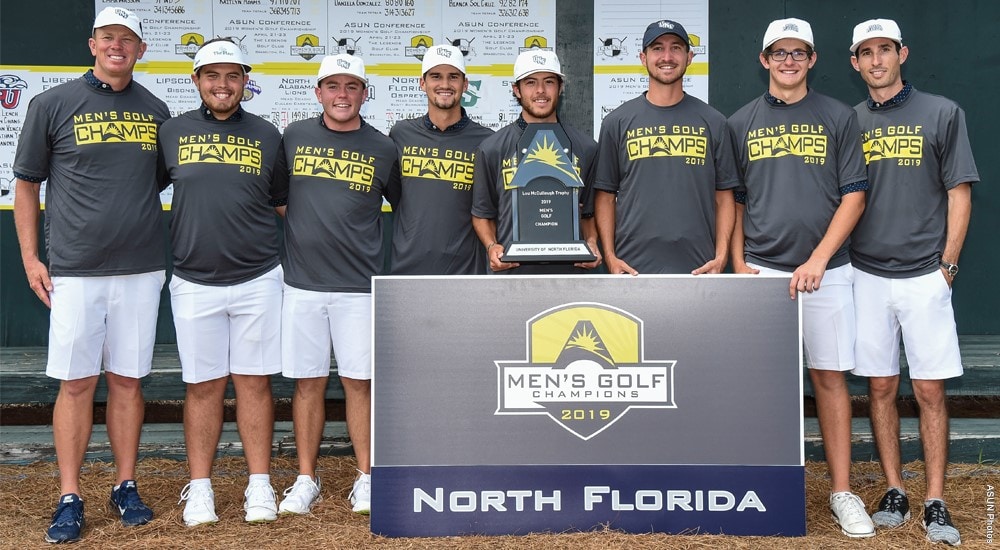 Led by four seniors, including Jordan Batchelor (individual champion) and Andrew Alligood (runner-up), North Florida won the A-Sun for the second straight year with a 12-shot win over Liberty. The Ospreys, back-to-back A-Sun champs for the first time since 2012-13, have now won six A-Sun titles, including five in the past eight years. "Always great to win a championship," UNF coach Scott Schroeder said. "The guys played smart and solid today. What a great story for Jordan to win. He's a kid that has worked hard and was always a great teammate and stepped up to carry us on an important week." 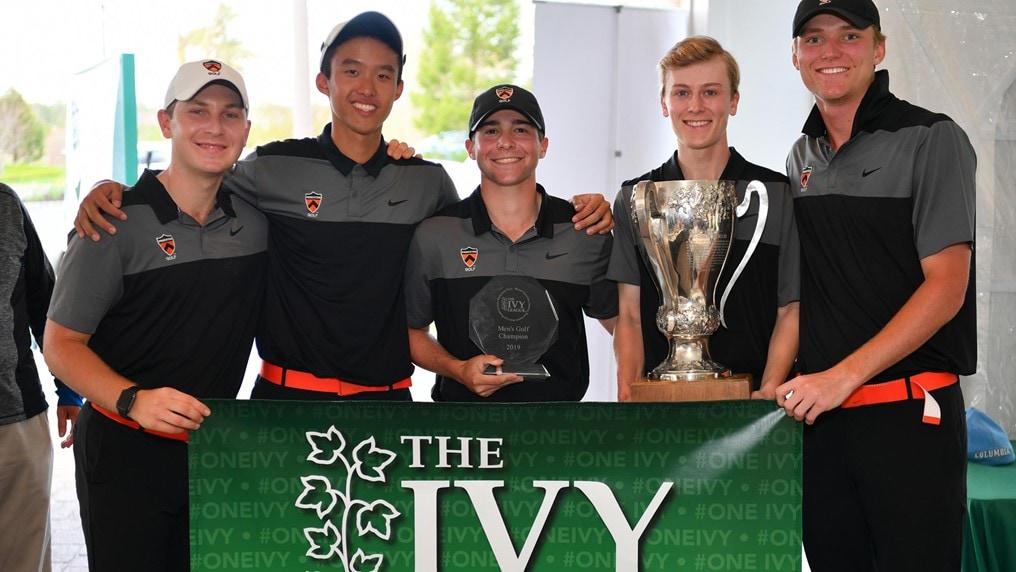 Princeton picked up its 30th Ivy League title and first since 2013 with a one-shot victory over Columbia. Evan Quinn and Sam Clayman finished in the top 3 for the Tigers while Yale's James Nicholas took medalist honors by two shots over Quinn. 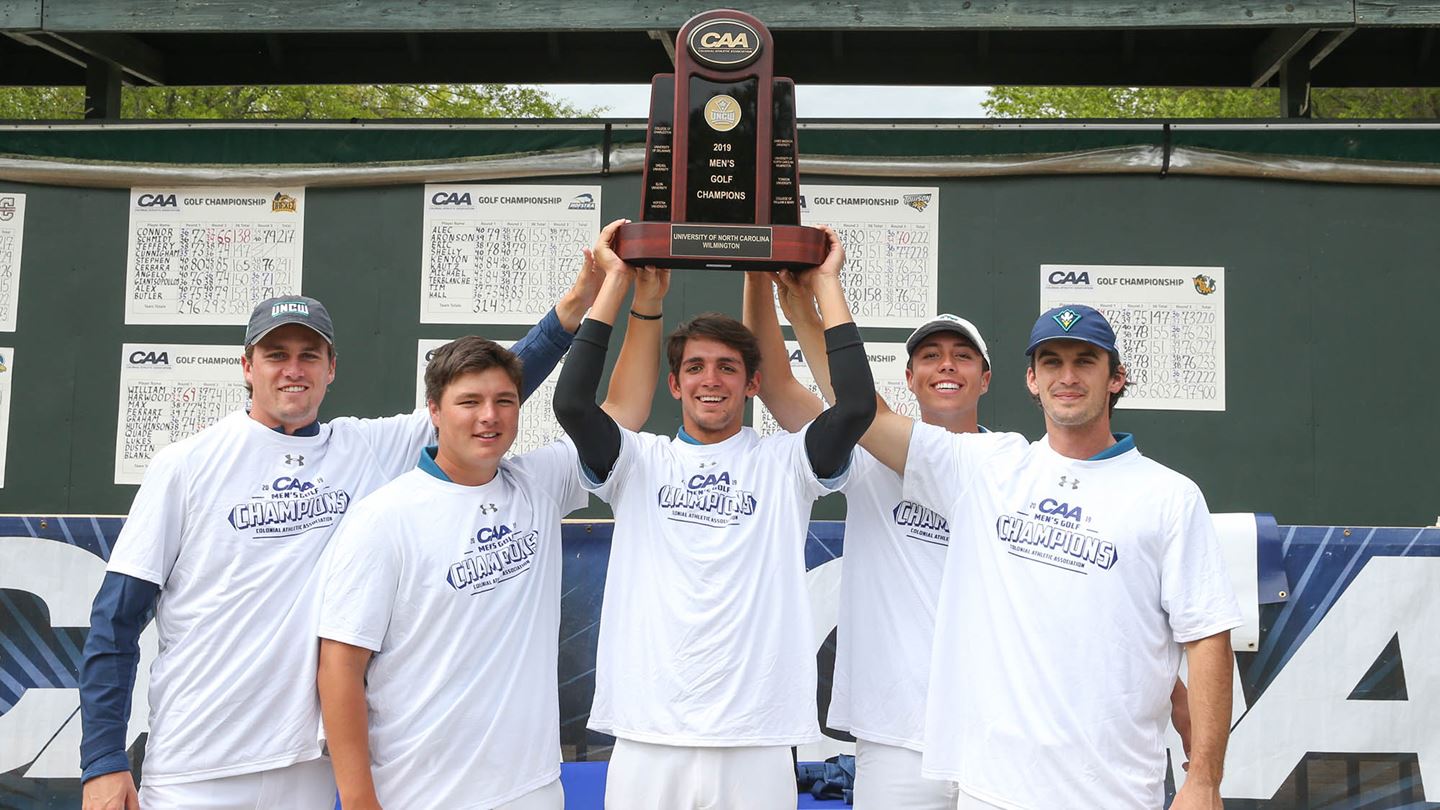 Freshman Segundo Oliva Pinto's victory in a four-man playoff for the individual title followed UNCW's successful title defense at the CAA Championship. The Seahawks were a shot back of 36-hole leader College of Charleston before pulling away on the final day for a six-shot victory. 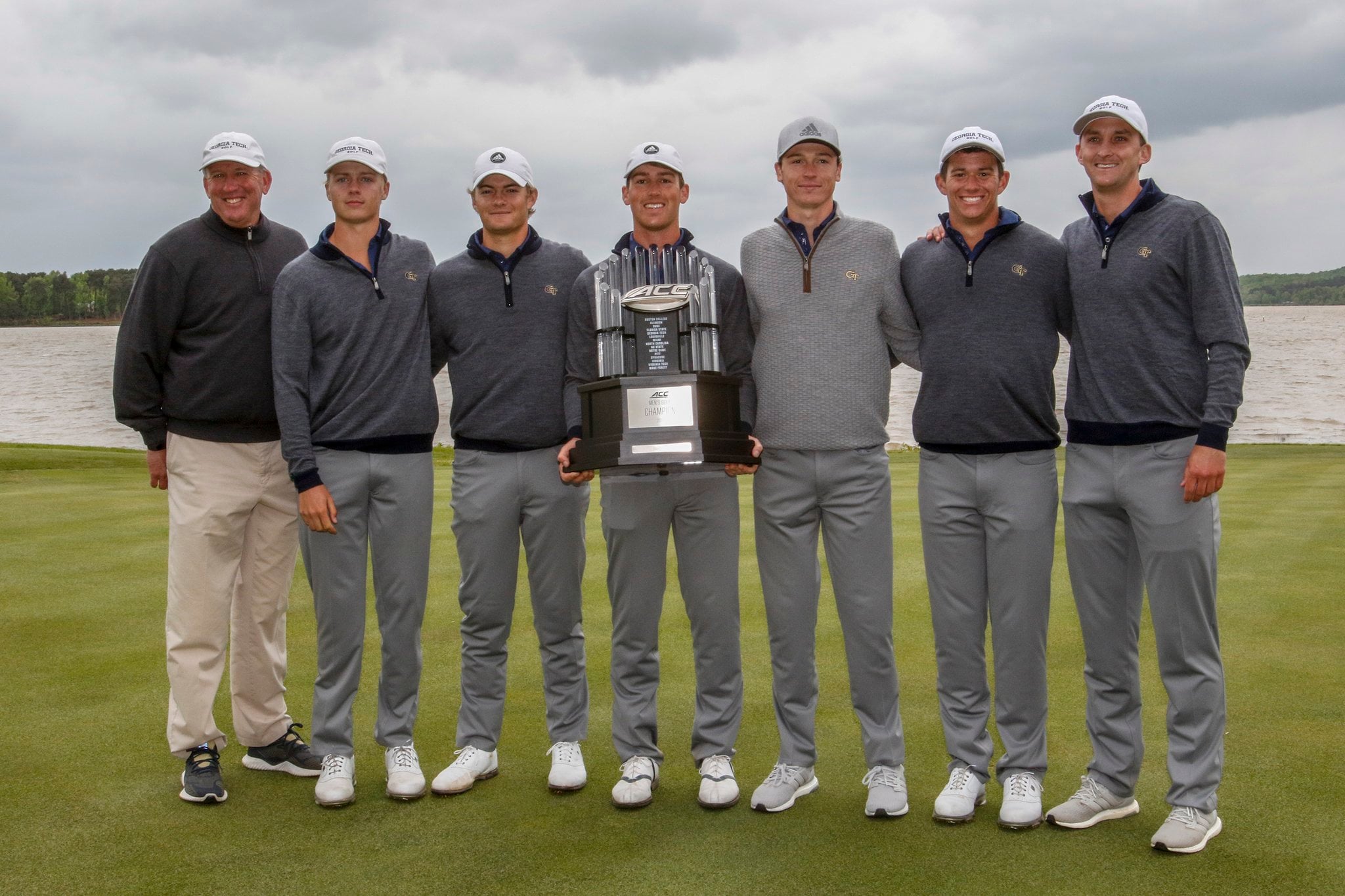 For the 18th time in school history, Georgia Tech brought home an ACC title. The Yellow Jackets shot 37 under to set a new ACC Championship record and best runner-up Virginia by 15 shots. The teams played 36 holes on the first day to avoid inclement weather, and then waited a day before finishing with the final round as scheduled. “I’ve never slept on a lead for two nights in a row,” Georgia Tech coach Bruce Heppler said. “And it was such a big one, I’m sure they were a little unnerved this morning because it’s a long time to wait. We didn’t get off to a great start, but they continued to play hard and played really well on the back nine to get it done.” Florida State sophomore John Pak took the individual title by a shot over Georgia Tech's Andy Ogletree as he fired his 10th straight round in the 60s, a final-round 69 in which Pak hit every fairway and green in regulation. “He plays to win and he attacks all day long,” FSU coach Trey Jones said. “He’s not timid or cautious at all. There wasn’t any ‘Can I miss it right? Can I miss it left?’ He’s on a run right now where he’s playing good every tournament that he’s in.” Pak now has four wins this season and eight top 10s. 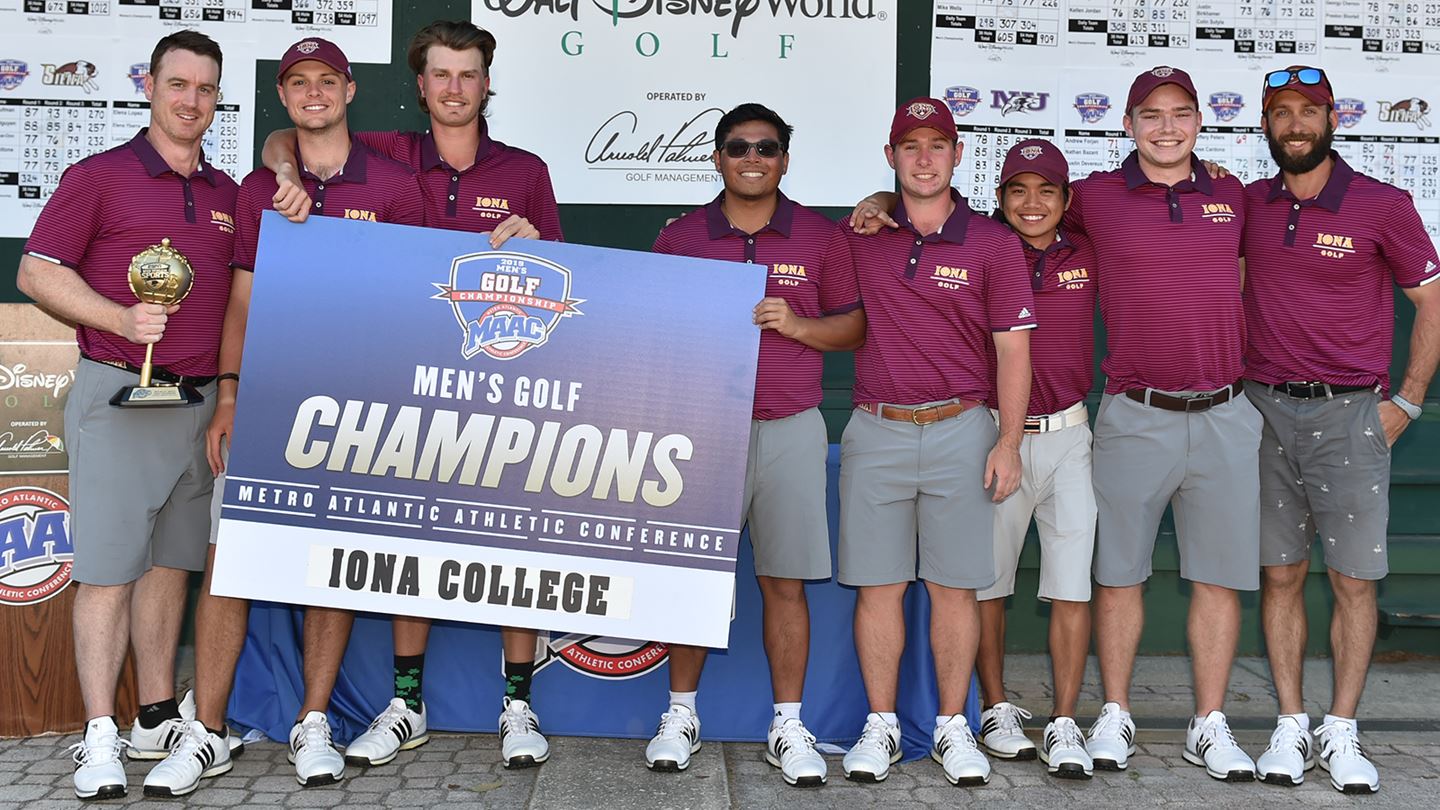 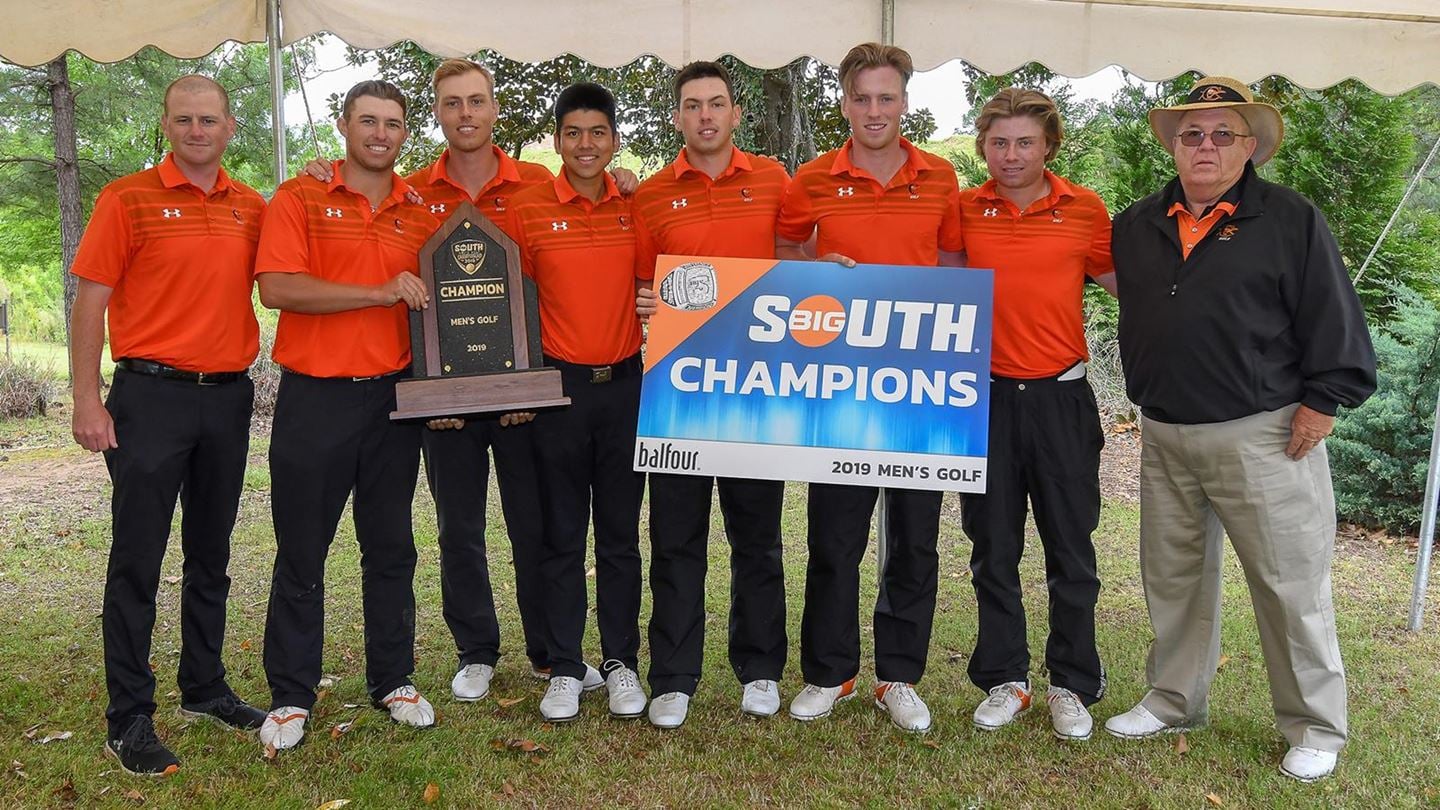 It was total domination by Campbell as the Camels won by 32 shots in stroke play before notching 5-0 victories over Winthrop and Gardner-Webb in match play. Campbell, which now has a school-record five wins this season and two Big South titles in three years, will head to an NCAA regional for the fourth straight year.