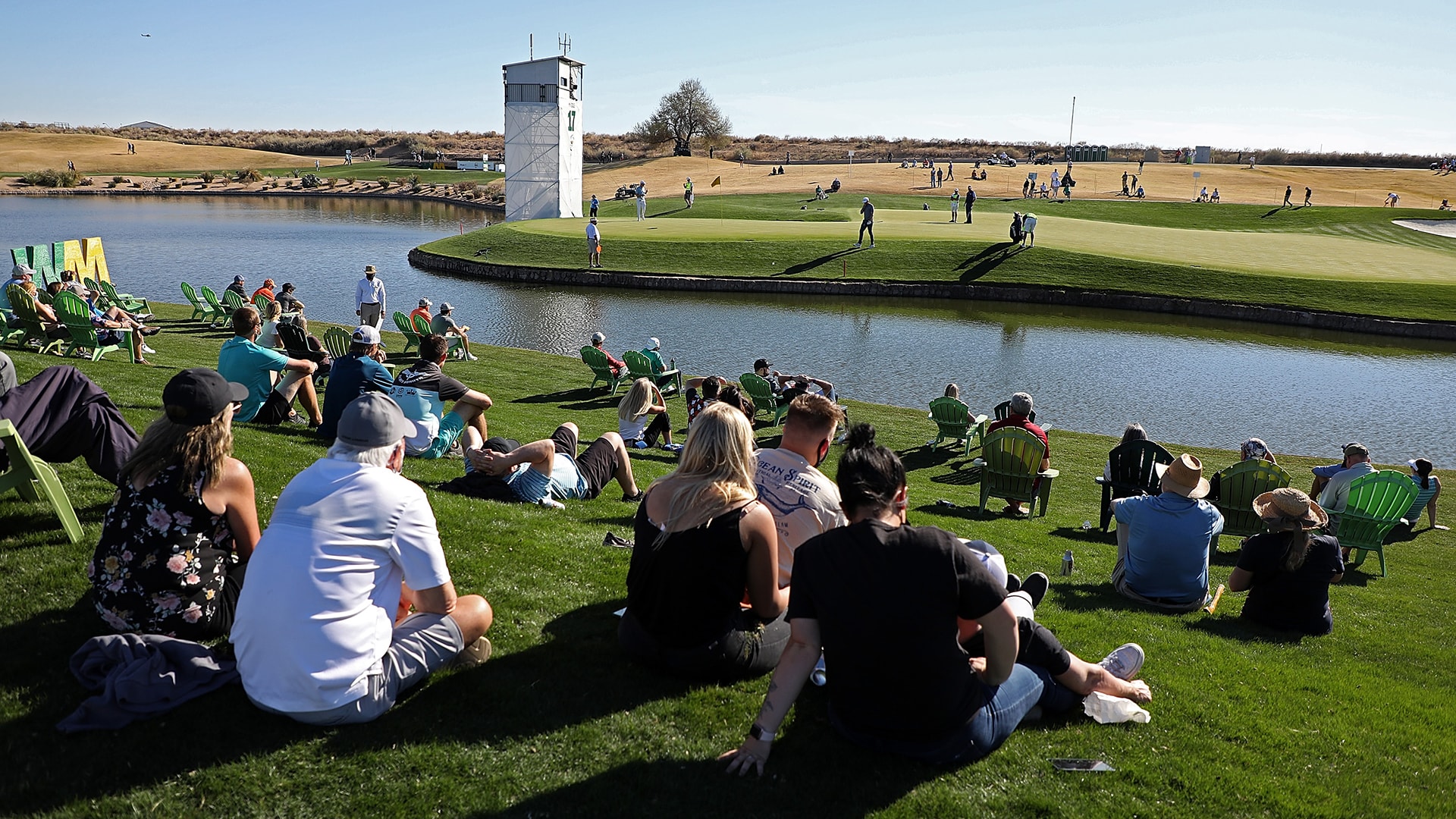 Crowds. If it’s not exactly the “Greatest Show on Grass,” it’s at least a step in the right direction with the Tour welcoming a limited number of fans back to the course this week at the Waste Management Phoenix Open.

Although the roughly 5,000 fans per day limit suffers when compared to the normally sold-out house at TPC Scottdale, players did enjoy a break from the silence – even if that meant a few awkward exchanges.

“When there's a lot of people it almost becomes white noise. Out here I chunked my chip and some guy is was like, ‘Dang, he duffed it.’ I'm like, yeah, you're right, I just duffed the crap out of that chip,” Xander Schauffele laughed. “You can kind of hear certain small comments more, which when you show up here you know exactly what you're walking into.”

As the Tour inches toward the Florida Swing and even larger crowds, players are welcoming all of it – even the heckling.

Digging deep. Charity is nothing new on Tour, but Justin Suh took philanthropy to a different level last week.

Suh is waiting for the PGA Tour Latinoamerica to get started and was playing the Farmers Insurance Open on a sponsor exemption when he decided to donate half his winnings back to the tournament.

“I am so lucky to play golf for a living and am so fortunate to compete in unbelievable PGA Tour events like the Farmers Insurance Open, and when I learn about tournaments that are struggling, I really want to help as I was brought up to support people less fortunate than me,” Suh told GolfChannel.com earlier this week. “While experiencing the firsthand impact COVID had on my family and friends, it was a no-brainer for me to give back half of my tournament earnings as there are a lot of people and groups that have suffered during this pandemic, and my personal experiences have taught me to always find a way to help our communities.”

If half of Suh’s $32,125 in earnings doesn’t sound like much compared to some of the Tour’s other charitable works, consider that the 23-year-old made roughly $50,000 on various tours last year.

The Tour likes to invoke charity often, and sometimes it can ring hollow given how much money is up for grabs each week. But for Suh, half his Torrey Pines check felt like something worth celebrating.

Going the distance. This week’s report from the USGA and R&A on distance has seemed inevitable for some time, and the battle lines had already been established.

Speaking for Tour players and equipment manufacturers everywhere, Rory McIlroy kicked the conversation off this week.

“It certainly doesn’t need to happen. I feel the USGA and the R&A are looking at golf through a tiny, narrow, little lens that pertains to 0.1 percent of golfers,” McIlroy said.  “They spent millions of dollars doing this distance insights report which I think is not going to change the game at all. Those millions of dollars that were spent should have been put back into the grassroots of the game. It reeks of self-importance.”

To be fair, McIlroy is among that 0.1 percent who is able to maximize technology for extraordinary distance off the tee, and the USGA and R&A didn’t sneak up on anyone with this report. The handwringing and drumbeat for change has been building for years and now is as good a time as any to sort this out.

Let’s just hope for the good of the game that both sides can avoid needless rhetoric and focus on what’s best for all of golf.

Let’s look at the tape. Last week’s rule’s dust-up involving Patrick Reed did cast a spotlight on one area that could be improved as the Tour continues to stumble around the edges of video replay.

The Tour has a curious policy not to comment on how video replay is used for various rulings.

During last month’s American Express, Matthew Wolff was assessed a one-stroke penalty a day after his ball had moved in the rough at PGA West. Wolff was initially not given a penalty but after reviewing video the next day officials changed their mind.

However, during Reed’s ruling on Saturday at Torrey Pines, he told the on-site rules official that neither he nor any other players, caddies or volunteers saw his ball land, and he was given relief. But Tour rules official Ken Tackett was on the CBS broadcast and did have access in real-time to video replay that showed Reed’s ball bouncing once left of the 10th green before settling into the rough.

Whether this would have changed the ruling on the ground will never be known, but it certainly would have been factored into the conversation and, maybe, allowed the Tour and Reed to avoid another controversy.

Tweet of the week: @wheatiePGA (Steve Wheatcroft) “The PGA Tour is filled with a bunch of good dudes. Nice to see there’s still a villain out there. 99.9% of viewers are rooting against Reed, and the .1% are just followers of [Reed’s wife’s] burner account. #anyonebutReed”

Mixed messages. Nothing says, “come join the fun” like complicated rulings that take the better part of two days to sort out and an escalating equipment debate that threatens to make the game harder.

Golf has thrived during COVID-19 and officials are now turning their gaze toward retention and making the most of the pandemic boom, but the last few days haven’t exactly positioned golf as the enjoyable option. Rule snafus are inevitable but having to explain Reed’s drop during the third round at Torrey Pines for five minutes off the top of Sunday’s broadcast had to be a buzz kill for those who were just tuning in to be entertained.

And just to prove that golf remains mired in its history the conversation transitioned to the USGA and R&A report this week on proposed equipment changes. It all feels like grow-the-game kryptonite during a time when golf should be leveraging its newfound popularity.