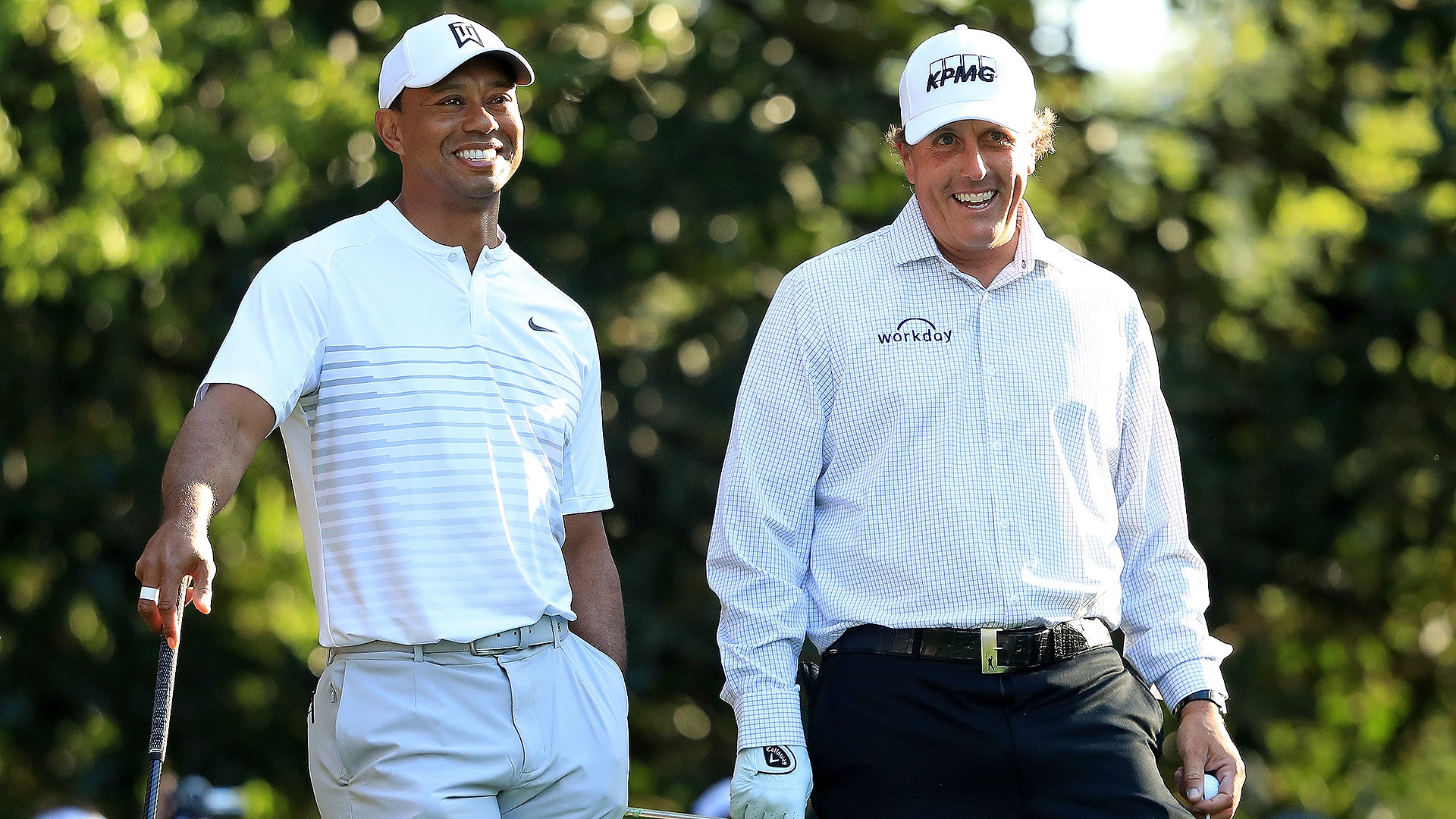 In this week’s edition, Tiger Woods and Phil Mickelson appear ready for a match that has been decades in the making, and golf’s rules makers try to make sense of a maddening few days.

Off the books. Tiger vs. Phil. Phil vs. Tiger. This has been the engine that’s moved golf for the better part of the last two decades, a dream matchup that’s been far too rare.

The game’s two most dominant players have been paired together in a PGA Tour event just 34 times in their storied careers, so it only makes sense that Mickelson and Woods would decide to take matters into their own hands.

According to a report on Golf.com, the duo had a $10 million, winner-take-all, made-for-TV match scheduled for July 3 in Las Vegas that is now being rescheduled.

“We’re working on a different date,” Mickelson said. “I thought it was done for the 3rd, but obviously it wasn’t.”

At The Players in May, Mickelson and Woods were paired together for Rounds 1 and 2, and Lefty seemed to suggest this exact scenario.

“The excitement that’s been going on around here, it gets me thinking: Why don’t we just bypass all the ancillary stuff of a tournament and just go head-to-head and just have some kind of a high-stakes, winner-take-all match?” Mickelson said. “Now, I don’t know if he wants a piece of me, but I just think it would be something that would be really fun for us to do, and I think there would be a lot of interest in it if we just went straight to the final round.”

The entertainment value of such a match would be undeniable, but we would like to suggest an added twist – the winner of Phil/Tiger duel also earns a spot on the U.S. Ryder Cup team. The loser gets a vice captain’s golf cart.

On schedule. According to various sources, the Tour is poised to finally unveil the 2018-19 schedule during next week’s John Deere Classic.

Although the lineup has been a work-in-progress for years, there are some key points of interest worth addressing, primarily the PGA Championship’s move to May and The Players move to March. This will give golf five consecutive months of marquee events and likely make both events better in the long term.

By condensing the regular portion of the schedule, there were some tough decisions, including the loss of The National, which will be replaced by a new event sponsored by Quicken Loans in late June in Detroit, and the relocation of the Houston Open to the fall to make room for a new event in Minnesota in early July.

There’s also going to be some serious congestion, particularly in the spring, with two World Golf Championships and The Players squeezed into a six-week window just before the Masters.

Most agree the new schedule is good for golf and the Tour, but know that there will be growing pains and some collateral damage along the way.

Open to interpretation. Initially, Bryson DeChambeau’s use of a protractor, or drawing compass, stumped some of the game’s best rules minds, prompting the Tour to contend there was no clear precedent to keep him from using it during a tournament round.

The Tour, which addressed the issue after DeChambeau used the device during the Travelers Championship, did point out the USGA and R&A were reviewing the matter.

That answer came this week, with the powers that be deciding that the use of a drawing compass during a “stipulated” round was a violation of Rule 14-3a.

DeChambeau told reporters last month he used the drawing compass to determine “true pin locations,” and it’s worth noting that the use of a directional compass is allowed during a tournament round.

The USGA and R&A are currently in a housecleaning mode with the Rules of Golf, going through the process of simplifying what can be wildly overcomplicated. May we suggest they spend a little extra time trying to unify the “compass” portion of the rule book.

Kang cheated. He took a bad drop from a hazard. I argued until I was blue. I lost.

Dahmen was responding to a question about why he let the group behind him during Sunday’s final round at TPC Potomac play through on the 10th hole. He later added, “It was a typical dispute about where or if it [Kang’s golf ball] crossed the hazard. It clearly did not cross the hazard. We went back and forth for 25 minutes and he ended up dropping closer to the green.”

Hazardous duty. It was an eventful week at the Quicken Loans National for Dahmen, who found himself paired with tournament host Tiger Woods on Saturday and embroiled in a particularly heated ruling on Sunday.

According to a statement from the Tour about the incident an official ruled that, “With no clear evidence to prove otherwise, it was determined that Kang could proceed with his fourth shot as intended, following a penalty stroke and subsequent drop.”

Kang also, essentially, declined to comment about the incident and he posted a final-round 64 to finish alone in third place and earn an invitation into The Open in two weeks.

Dahmen claimed that Kang’s ball never crossed the hazard, meaning he wouldn’t be allowed to drop closer to the hole. Kang disagreed and the Tour official confirmed, allowing Kang to drop 35 yards from the hole on his way to a par-5.

This all leads to another convoluted rules questions, if the testimony of a fellow competitor isn’t “clear evidence,” what is?