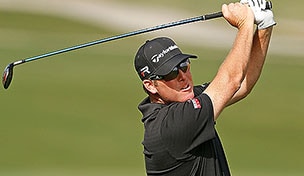 Getty Images
MEMPHIS, TN - JUNE 13: Robert Garrigus of the United States reacts after making his putt on the 18th green to make it into a three way playoff with Robert Karlsson and Lee Westwood during the final round of the St. Jude Classic at TPC Southwind held on June 13, 2010 in Memphis, Tennessee. (Photo by John Sommers II/Getty Images)  -

HUMBLE, Texas – The march to the Masters for Rory McIlroy looks more like a crawl.

McIlroy had only four birdie putts on the front nine, none closer than 20 feet. He took two chips to reach the second green. He found the water on the third-easiest hole at Redstone Golf Club and made double bogey. What he salvaged Thursday in the Houston Open was a 73, along with some optimism.

''I think I'm still a little bit tentative on the golf course and not committing to my shots fully,'' McIlroy said. ''But I think that just takes time and, hopefully, another three rounds this week and some good scores will give me confidence going into the Masters.''

D.A. Points, using an old putter he once took from his mother, opened with five straight birdies on his way to an 8-under 64, giving him a one-shot lead over Cameron Tringale and John Rollins. Also coming to life was Angel Cabrera, the Argentine with two majors and a house at Redstone. He had a 66.

McIlroy, playing in the afternoon when the wind kicked up, was happy just to stay in range. Right when it looked as if the 23-year-old from Northern Ireland was headed for a big number, he rattled off three quick birdies and got it back to even par before he failed to convert a superb flop shot into par.

''I fought back well. I didn't get too down on myself,'' McIlroy said. ''It would have been great to finish even par, but I made a couple of shots back, so that's not too bad.''

Even so, the Houston Open is his final stop before the Masters, and it's not as if McIlroy has loads of rounds behind him. Thursday was only the ninth round he has completed in five tournaments this year. And he no longer has the No. 1 ranking, taken back by Tiger Woods last week at Bay Hill.

The first step is making the cut at Redstone on Friday, and seeing more good shots.

''My swing is not as free flowing because I'm working on a few things and getting into a couple of bad habits,'' McIlroy said. ''But it's definitely feeling more natural than it has been the last few weeks.''

Points first borrowed the Ping Anser from his mother during his junior years in Illinois, and like most golfers, he abandoned it once he stopped making putts. But he recently asked Ping to clean it up for him and add some weight. He also got a putting lesson – no, not from Steve Stricker – and he was on his way.

''Maybe I'm an idiot for not having used this putter the whole time,'' Points said. ''It worked well today.''

Points, whose only win came with actor Bill Murray at his side at the Pebble Beach National Pro-am, made all five of his opening birdies from inside 15 feet. He dropped only one shot along the way.

A mild wind gained strength in the afternoon, and Rollins still managed a 65.

''I knew the conditions were going to be tough out there, knew the greens were fast, so that makes it tough as well,'' Rollins said. ''I just kept the ball in front of me and gave myself a lot of opportunities and got a solid round out of it.''

Phil Mickelson was at 4 under and right in the mix until he hit his tee shot into the water on the sixth hole and made double bogey, nearly hooked a 3-wood into the hazard on the next hole and three-putted for bogey, and then made bogey on the par-3 ninth from a bunker to wind up at 72.

''It was a disappointing finish,'' Mickelson said. ''I feel really good with the putter, and I believe that as the tournament goes on, I'll get better.''

Mickelson played with defending champion Hunter Mahan, who didn't hit the ball his best and it finally caught up with him at the end for a 74. Also in the group was Geoff Ogilvy, who needs to finish in the top 50 in the world to get into the Masters. Ogilvy is currently at No. 50, though he will lose spots through the formula this week. He had three penalty shots in his round of 73.

Lee Westwood hit two shots in the water and still salvaged a bogey and was in the large group at 68 that included Riviera winner John Merrick and Jimmy Walker.

Charles Howell III had a 69 in his bid to get into his hometown major at Augusta National. Howell would need to finish at least in fourth place alone to have any chance of moving into the top 50.

Points was just trying to see some reasonable results, having made only two cuts all year. He did manage to join a group of stars in the Tavistock Cup earlier this week and, upon leaving home Tuesday, he grabbed a handful of putters. One of them once belonged to his mother.

Ping rep Matt Rollins had some weights added to the putter, and equally important was an impromptu lesson from Lamar golf coach Brian White.

''It's one of those things,'' Points said. ''I holed some nice par putts yesterday in my pro-am. I didn't hit it great, but I made a few good putts and the ball was going in the hole with nice pace and rolling real tight. And I thought, 'All right, this might be the key that kind of gets me going.'''

For McIlroy, it was another slow start. He has yet to break par in his five opening rounds this year – that includes the Match Play Championship – and found himself behind early. He was in a fairway bunker on the eighth hole, opened the face of a 9-iron to advance the ball as far as he could, and caught the lip. With some 250 yards for his third shot, a 5-wood leaked into the water and he walked off with a double bogey.

But he never got down on himself.

''I think I learned from that over the last few weeks. I've got to keep my spirits up,'' McIlroy said. ''I felt like I was doing that a bit too much at the Match Play and the Honda, and obviously we saw what happened there.''

Frustrations boiled over at the Honda Classic halfway through the second round when McIlroy walked off the course. He vowed not to do that again.

Mickelson, meanwhile, was going along nicely despite some errant tee shots, such as his one on the 12th hole. He sliced the tee shot so far left that it bounced off the cart path, across the 13th tee box and down a slope toward the bushes. He was about pin-high, only 100 yards left of the green. He hit wedge into about 15 feet and turned to the gallery and said, ''It's all about angles.''

The angles caught up with him. Mickelson's tee shot on the sixth never cleared the water, leading to his sloppy finish.