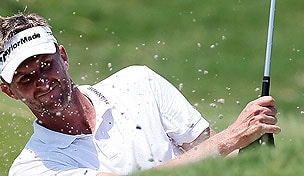 Getty Images
HONOLULU - JANUARY 15: Aron Price of Australia changes socks on the 14th hole during the first round of the Sony Open at Waialae Country Club on January 15, 2009 in Honolulu, Hawaii. (Photo by Sam Greenwood/Getty Images)  -

A runner-up finish at Kiawah Island ensured that it wouldn’t be his last.

Making only his second appearance in a major, the 38-year-old Englishman finished solo second at the PGA to earn a berth in next year’s Masters. He also qualified for the 2013 PGA at Oak Hill.

“Seeing Augusta as many times as I have, it’s like I know the place and I’ve never even been there,” said Lynn, who tied for 53rd in his only other major start (2003 British Open).

“So actually going and getting to experience it is going to be amazing and something I’m really going to look forward to.”

Trying to maintain his position inside the top 100 in the world – the cutoff to qualify for the year’s final major – Lynn chose not to play after the Scottish Open on July 15. Said Lynn, who was 98th in the world at the time, “I thought, I’m not going to miss out here again by one or two spots.”

Said Lynn, “To come and perform the way I have this week in a major is very special and it’s a great achievement. It’s not sunk in properly yet, to be honest.”