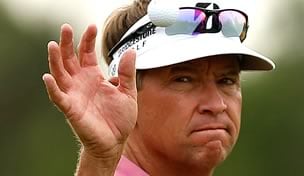 Getty Images
ORLANDO, FL - MARCH 25: Henrik Stenson of Sweden takes his driver for his tee shot at the 16th hole but without using a tee peg instead he used his wedge to create a tuft of grass to place his ball during the first round of the Arnold Palmer Invitational presented by Mastercard at the Bayhill Club and Lodge, on March 25, 2010 in Orlando, Florida. (Photo by David Cannon/Getty Images)  -

Davis Love III is in recovery in an Atlanta hospital following surgery on Friday to remove bone spurs and a spinal-fusion procedure, according to his doctor.

Love, who withdrew from last week’s Waste Management Phoenix Open because of the neck ailment that he said has been an issue since 2000, had bone spurs and  discs removed between his C 5-6 and C 6-7 vertebrae. The fusion used spacers and a titanium plate, Dr. Regis Haid, Jr., of Atlanta Brain and Spine Care, told GolfChannel.com.

“In terms of what we did, it will probably impact his snowboarding more than his golf swing,” said Haid, who first met with Love about 12 years ago. “I suspect he will probably be able to swing even better when he’s fully recovered.”

Recovery is expected to take from six to eight weeks and Love anticipates being able to putt within five days of the surgery and chip within 10.

“It’s like any other athletic injury. We’ll have him putting (in) a week or so and practicing swings in the near future,” Haid said. “Until the fusion is solid we don’t want him digging out shots on the ground.”

Haid said Love was already walking around and will begin strength condition in his arms on Saturday.

Love, who said he’d experienced periodic loss of strength and numbness in his arms in recent years, told GolfChannel.com before the surgery the uncertainty of the ailment prompted him to have the procedure, which is similar to the surgery Denver Broncos’ quarterback Peyton Manning had in 2011.

“We expect him to have at least three to five pain-free years, hopefully more than that. We’re hoping to get him through to the super seniors (tour),” Haid said.