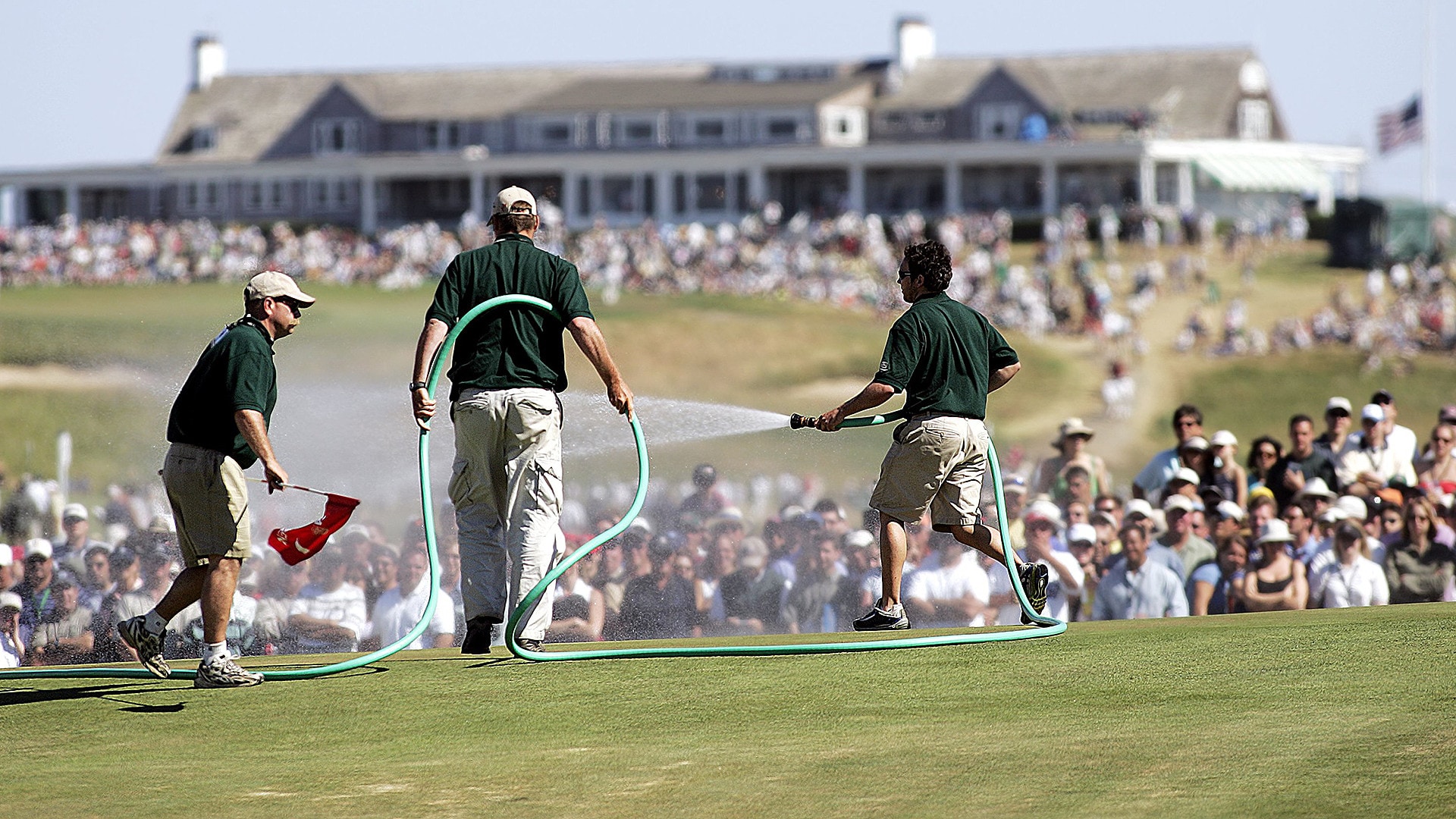 Kevin Stadler’s version of major championship trauma struck on Saturday, well before the USGA broke out the hoses on Sunday in a desperate attempt to save the 2004 U.S. Open.

At the time, Stadler was a 23-year-old journeyman trying to make his way in the professional ranks by playing mini-tour events and hoping to avoid the full rigors of Q-School. Qualifying and making the cut at the ’04 championship was his express ticket to the final stage of Q-School, so when he secured himself a weekend tee time at Shinnecock Hills it was as if a weight had been lifted from his round shoulders.

He had no idea what was waiting for him.

The first sign that things would be different on the weekend came when he pulled into the player parking lot on Saturday and watched a group of caddies on the practice putting green.

“There were caddies throwing balls down on the green that were bouncing over their head,” recalled Stadler, who was playing his first U.S. Open in ’04. “To see that so firm I couldn’t comprehend it.”

Later that afternoon, J.J. Henry was practicing on the same green as a warm, dry wind whistled across the iconic course.

“We were pouring bottles of water on the putting green and it’s just not going into the grass. We’re all like, ‘This is crazy,’” Henry said.

The real madness wouldn’t rear its crusty head until Sunday morning, when Stadler and Henry, playing in the day’s first group off, arrived at the seventh tee.

The par-3 seventh was playing 189 yards that Sunday, 14 years ago. The seventh green had been on the “edge” all week, according to numerous players who participated, with officials using back (top) right hole locations for most of the week to avoid the most severe slopes. On Sunday, however, the pin was placed on the front right section of a green that is shaped to feed tee shots to the back left portion of the putting surface.

Stadler was first to hit at the seventh, a wedge that thumped hard onto the parched putting surface and bounded into a bunker behind the green. Henry’s tee shot suffered the same fate.

By the time the dust – literally – settled for the twosome on the seventh, they’d taken a dozen shots between them to finish the hole and alarms all across Shinnecock Hills began to sound.

“We made a 6 [triple bogey] and a 6, and we didn’t hit a bad shot – that’s what’s crazy,” Henry remembers, the dismay of the moment still vivid even a decade and half removed.

From the back bunker, Stadler nearly holed his second shot with the ball rolling past the hole about 3 feet. Henry chipped about 12 feet past the hole. Henry’s next shot, a putt, would trundle back into the bunker behind the green.

“I’m waiting while J.J. was playing,” Stadler explained. “I was thinking I had a tap-in par and that [3]-footer looked like a 20-footer by the time J.J. was done.”

Stadler’s par attempt was straightforward, the line just outside the right edge, and for a moment he’d thought he made it. But as his ball inched its way past the hole it began to pick up speed and wouldn’t stop until it rolled back into the bunker.

“The ball was moving in slow motion,” Stadler said.

Stadler’s father, 13-time PGA Tour winner Craig, was walking with his son that day. Craig Stadler had a reputation of showing emotion on the golf course and if ever there was a time for the younger Stadler to follow in his father’s footsteps it was now.

“We all know that Kevin is a lot like his dad, and I just remember saying to myself please make this putt, I can only imagine where this putt is going to end up if he misses it,” Henry said. “Sure enough he misses and he’s playing from the bunker with his next shot.”

Things didn’t get much better for either player after the seventh. Stadler, who opened the week with a 68 and was tied for fifth place after Round 1, signed for a 15-over 85. Henry shot 76, which turned out to be one of the day’s better rounds.

Although the entire course – which had been sent over the line by a dry wind that siphoned every drop of moisture from the layout – would essentially become unplayable, it is the seventh hole that remains the modern USGA’s darkest hour.

After Stadler and Henry made a mess of the seventh, officials scrambled in an attempt to keep things from truly getting out of hand. Crews began to syringe greens between groups, an unprecedented move in the middle of a round, but the alternative was not an option.

Although the watering helped, there was an element of uncertainty to the process that caused a new set of problems.

“They decided they were going to water between groups,” recalled Steve Flesch, who finished tied for seventh in ’04 for his best finish at the U.S. Open. “We get to the seventh tee and the group in front putts out and they aren’t syringing the green.

“They are like, go ahead and hit, and we’re like, no we’re waiting. The official said, ‘We’re [watering] between every other group.’ Chris [DiMarco] said he wasn’t going to hit until they syringe and the official said we’re going to penalize you for slow play if you don’t tee off.”

Flesch and DiMarco both made bogeys at No. 7.

Phil Mickelson, who would finish two strokes behind eventual champion Retief Goosen, had a similar experience.

When Stadler and Henry completed their round, Tom Meeks, who was the USGA’s director of rules and competition at the time, was waiting for them in the scoring area.

“I can remember Tom Meeks coming up to us in the scoring trailer and saying how sorry he was, saying, ‘Unfortunately we lost the golf course,’” Henry recalled. “Basically, really sorry you guys had to play through some of those conditions.”

Meeks declined to comment about the ’04 championship, telling GolfChannel.com, “I have nothing but fond memories of Shinnecock Hills and wish them nothing but the best.”

Mike Davis, who succeeded Meeks as the association’s director of rules and competition and is now the executive director, has been more forthcoming, telling a group of reporters at last year’s U.S. Open, “That [what happened in ’04] will not happen again. If it does, I’m retiring,” he said.

Many players have noted that the seventh green hasn’t been changed since the ’04 championship, prompting some to wonder if the USGA could find itself in a similar situation at this week’s U.S. Open, but Davis has assured anyone who would listen that this time will be different.

“Looking back at 2004, and at parts of that magnificent day with Retief [Goosen] and Phil Mickelson coming down to the end, there are parts that we learned from,” Davis said. “I’m happy we got a mulligan this time. We probably made a bogey last time, maybe a double bogey.”

For those who actually did make double bogeys (or worse) during that final round in ’04, they hope Davis is right.

“It went from honest perfection, best course I’ve ever played, before the weekend, to the hardest thing I’d ever seen. The greens were dead,” Stadler said. “Seriously, I played 27 holes on Wednesday because I couldn’t get enough.”

By Sunday, Stadler and Co. couldn’t get away from Shinnecock Hills fast enough.