Dealing with hypotheticals on the anchor ban 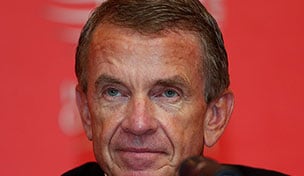 For those who haven't paid much attention to the anchored putter debate recently, let's put it into terms that everyone can understand.

In this analogy, there is a man – let's call him 'Friend A' – who is on the verge of making a major life decision, so he consults with a buddy – he’ll be 'Friend B' – as to what he should do.

Friend A: 'I'm thinking of getting a divorce from my wife. Even though we've been together for a long time, it never felt right. I've reached a boiling point lately. But I'd really like to get your opinion.'

During a 90-day waiting period, Friend B studies Friend A's marriage and educates himself about the relationship. He analyzes data. Holds meetings at night. Listens to what other people think. Finally, he offers an opinion.

Friend B: 'Well, after getting together with some mutual friends, I disagree with your stance. I'm not saying I wouldn't support you if you made this decision – not yet, at least – but I do see fault in your logic. You asked for a recommendation and I think you should stay with your wife.'

There are two potential options.

The first involves Friend A ignoring Friend B's advice. He goes ahead with the divorce anyway, running the risk of having his friend side with his wife, essentially losing a buddy in the process of dissolving his marriage. It leads to a strained situation at best and a complete mess at worst. Sure, when Friend A hosts a party, he can do so under his own terms, but if Friend B continually invites them to events as a couple, it turns into a power struggle that Friend A loses in embarrassing fashion.

The second scenario finds Friend B taking Friend A's advice. At the recommendation of his buddy – and others who know him very well – he decides against getting divorced. On the plus side, he keeps some continuity and consistency in his life. On the negative, though, that boiling point never dissipates, as he’s left secretly wondering whether he should have trusted his gut.

These are the two scenarios facing the U.S. Golf Association – not to mention its partner-in-crime, the Royal & Ancient Golf Club. After the game’s governing bodies jointly proposed on Nov. 28 that anchored putting become banned starting in 2016, USGA executive director Mike Davis asked PGA Tour commissioner Tim Finchem for his organization’s own recommendation.

On Sunday, Finchem offered that recommendation, based on meetings with his membership and recent conference calls with the PGA Tour Policy Board and Players Advisory Council.

“The essential thread that went through the thinking of the players and our board of directors and others that looked at this,” he said, “was that in the absence of data or any basis to conclude that there is a competitive advantage to be gained by using anchoring, and given the amount of time that anchoring has been in the game, that there was no overriding reason to go down that road.”

In layman’s terms, Davis is considering a divorce from anchored putting, but Finchem is trying to convince those two crazy kids to stick it out and renew their vows.

Those who reside in corner offices in Ponte Vedra Beach are fond of saying, “We don’t deal in hypotheticals.” That’s a fine rallying cry, but this situation is wrought with nothing but them.

If … the PGA Tour continues its push to keep anchored putting legal, it sets up a massive game of chicken on a one-lane highway, with the first to flinch winding up in a roadside ditch.

If … the USGA and R&A have their way and the PGA Tour goes in another direction, welcome to the Bifurcation Era. Ironically enough, the governing bodies have all condemned having two sets of rules for professionals and amateurs, yet that’s exactly what these decisions will spawn.

If … all of these organizations steadfastly stand by their current contentions, there could someday be a time when players such as Webb Simpson and Keegan Bradley could anchor their putters every week in PGA Tour events, then be forced to change strategy for the major championships. That would be the case for the U.S. Open and Open Championship. Chances are, the PGA of America would support PGA Tour local rules for the PGA Championship. Augusta National? They do whatever they want, though popular sentiment is that officials would fall in line with the USGA and R&A.

We’re still a long way from any of those hypotheticals coming to fruition, but even those who decidedly don’t like to deal in them are taking note of the potential repercussions.

While it remains to be seen how the PGA Tour’s recommendation could impact the anchored putting proposal, it’s easy to understand how this could severely change the game. Not just in a technical aspect, but it could alter relationships and strategies and the notion of professionals playing by different rules than amateurs.

Much like in the previous analogy, this situation seems likely to lead to a strained situation at best and a complete mess at worst. There are really only two potential scenarios – and neither will allow all parties to live in total harmony.