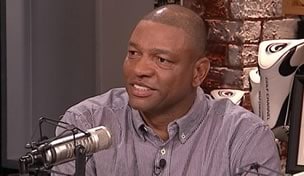 Getty Images
DANVILLE, CA - OCTOBER 10: Mikaela Parmlid of Sweden makes a tee shot on the 13th hole during the second round of the LPGA Longs Drugs Challenge at the Blackhawk Country Club October 10, 2008 in Danville, California. (Photo by Max Morse/Getty Images)  -

This doctor prescribes golf for his NBA stars.

Glenn 'Doc' Rivers, head coach of the Boston Celtics who will serve as an NBC analyst for the upcoming Olympics basketball competition, loves golf and believes there is a certain therapeutic value to the game for his players, even during their season.

“I encourage my players, if we’re on the road and we have a day off, to go play,” Rivers told GolfChannel.com Thursday after an appearance on “Morning Drive.” “Golf is a great break from the noise and the madness of the NBA. I think the serenity of golf, even though you can come back stressed out about your round, the mental break it provides from basketball is important.”

Rivers is a member at Interlachen Country Club near his home in suburban Orlando, Fla. He used to be a 7-handicap when he was living in Orlando year around.

“I was never great, but it’s funny, the late Chuck Daly told me when I took the Boston job that my handicap would go up two strokes a year,” Rivers said. “I asked him, `What’s with that?’ and he said, ‘Because you won’t be practicing anymore.’ He was about right with the handicap.”

Rivers plays to a 14 handicap these days.

“I love the game,” Rivers said. “I like the challenge, the concentration required, the beauty of all the different courses. In basketball, even though there are different arenas, the court’s the same. Every golf course is completely different. I love playing new courses.”

And about the American chances of winning a gold medal in basketball?

“They should win, but it doesn’t mean they are going to win,” Rivers said. “They are clearly the best collection of individuals. There’s no doubt about that. Whether they can become the best team, that remains to be seen. The Argentine team, the Spanish team, Brazil, those guys have played together since they were kids, on the same teams. They’ve grown together and that’s a big advantage in team sports. I still think the overall talent of the American team will overtake that, but you can have one bad shooting night in basketball and lose.”