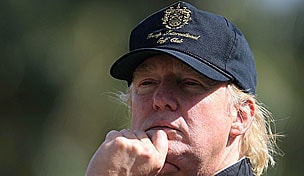 The membership of Charlotte-area The Point Lake and Golf Club has agreed to sell their club to Donald Trump.

Trump will purchase the club for $3 million and rename it Trump National Golf Club Charlotte. As is typical with similar acquisitions, Trump intends to invest millions to improve the club when the deal closes, as soon as April.

“My father and I are overwhelmed by our incredible victory and the immense support of so many wonderful members,” said Eric Trump, according to the Charlotte Observer. “There is no doubt that when completed, Trump National Golf Club Charlotte will be the best club in North Carolina and beyond.”

The vote to sell follows a nearly two-year process. Voting was divided among members concerned about the potential impact on the club and surrounding Lake Norman neighborhood. Proponents argued Trump will invest heavily to make needed improvements and add value to real estate in the community. Opponents of the deal agreed the increase in pricing could change the character of the area, but for the worse.

The course will be Trump's 12th in the United States. He also recently completed the purchase of the Doral resort in Miami and has a deal in place with the New York City government to operate the new Ferry Point municipal golf course near the Bronx.