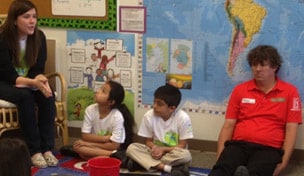 HUMBLE, Texas – Golf has a new overnight craze and it’s all about imitating the laconic Jason Dufner.

It’s called “Dufnering” and if you haven’t heard of it yet, you’re clearly out of the loop, because the term is trending around the nation. It revolves around a photograph and the gravitational pull of social media. As Dufner himself explained the genesis of the phenomenon in a tweet: “What can I say, I was tired, my back hurt from sitting on the floor, and we were talking about relaxation and focusing.”

Like every story, though, there’s more to it than that.

On Thursday, Dufner visited Irving, Texas, where he was celebrated as the reigning Byron Nelson Championship winner. He met with the mayor, hobnobbed with event sponsors and toured the tournament’s offices before heading over to The Salesmanship Club School to speak with a third-grade class.

The lesson for the day was concentration, something that comes in handy when you’re trying to hit a golf ball in front of thousands of fans.

“It was a focus activity to help them get ready to learn,” said Tracy Cobb, the tournament’s director of communications. “It’s about concentrating, paying attention to breathing. They would stand up and put a beanbag on their heads, using that mental focus. Then we let Jason talk to them about importance of focusing on the golf course and how critical that is for him.”

By Cobb’s account, Dufner was engaging and having fun talking with the kids. Once he was done, they went through one more focusing exercise that involved multiple repetitions of standing up and sitting down. Upon the last time, Dufner relaxed a little and, well, history was made.

A local news reporter – though it could have been anyone; there were about 60 people in the room and many were taking cell phone photos – took a picture of Dufner sitting against a wall, legs stretched out while sitting on his hands, a distant look on his face. If a picture says a thousand words, this one screamed classic Dufner, the man who looks the same whether he makes birdie or bogey, whether he’s winning or missing the cut.

Almost instantly, the photo went viral. It was posted to Deadspin.com, then started flying around Twitter and other social media outlets. By Thursday night, fellow PGA Tour stars such as Bubba Watson, Rickie Fowler and Luke Donald were posting their own “Dufnering” photos, and waves of golf fans and nonfans alike started flooding the Internet with submissions of their own. “It's the best thing ever,” Rory McIlroy reported with a smile. “I've never had so much entertainment. I was on my own last night in the room and just going through things. The laughs, it's just too much. The first thing I said to Keegan [Bradley] when I saw them this morning, ‘This is best thing I've ever seen.’ … It was good entertainment for the night.”

The insinuation is that Dufner either wasn’t impressed or wasn’t having fun when the photo was taken, but those in attendance beg to differ.

“It’s a classic case,” said Byron Nelson tournament director Jon Drago, “of a picture being taken out of context.”

If any player is aware of how his profile can be boosted through social media, it’s Dufner. A two-time PGA Tour champion known as a solid ball-striker, he may not have much of a Q-rating if not for showing off his online persona.

Now, much like NFL quarterback Tim Tebow brought “Tebowing” to the forefront, Dufner's name is synonymous with an action verb – and everybody wants in.

“When I saw how quick it got big and how everyone was doing, I started laughing hysterically,” Brandt Snedeker said. “I never knew Dufner had this wide range of appeal.”

“I couldn’t do it [Thursday night], because I was by myself. I tried to do it in front of a mirror and it didn’t work, so I waited until this morning and got Brandt and DJ to do it,” Bradley explained. “I’m a little nervous to be Dufnering at Augusta, but I’m going to be Dufnering everywhere I go, for sure.”

He and – for now – thousands of others, too. The latest craze should tell us plenty about the power of a photograph and the massive reach of social media. The world is now imitating a player whom most golf fans didn’t know just two years ago. It just proves how quickly things move these days.

As for Dufner, he hasn’t kept that expression from the photo in the time since it was taken, instead going from stoic to smiling – believe it or not.

'I can't really believe it, to be honest,” he said. “I've been laughing for some time about it. I think everyone is really enjoying it. The Twitterverse can be a pretty fun place.'