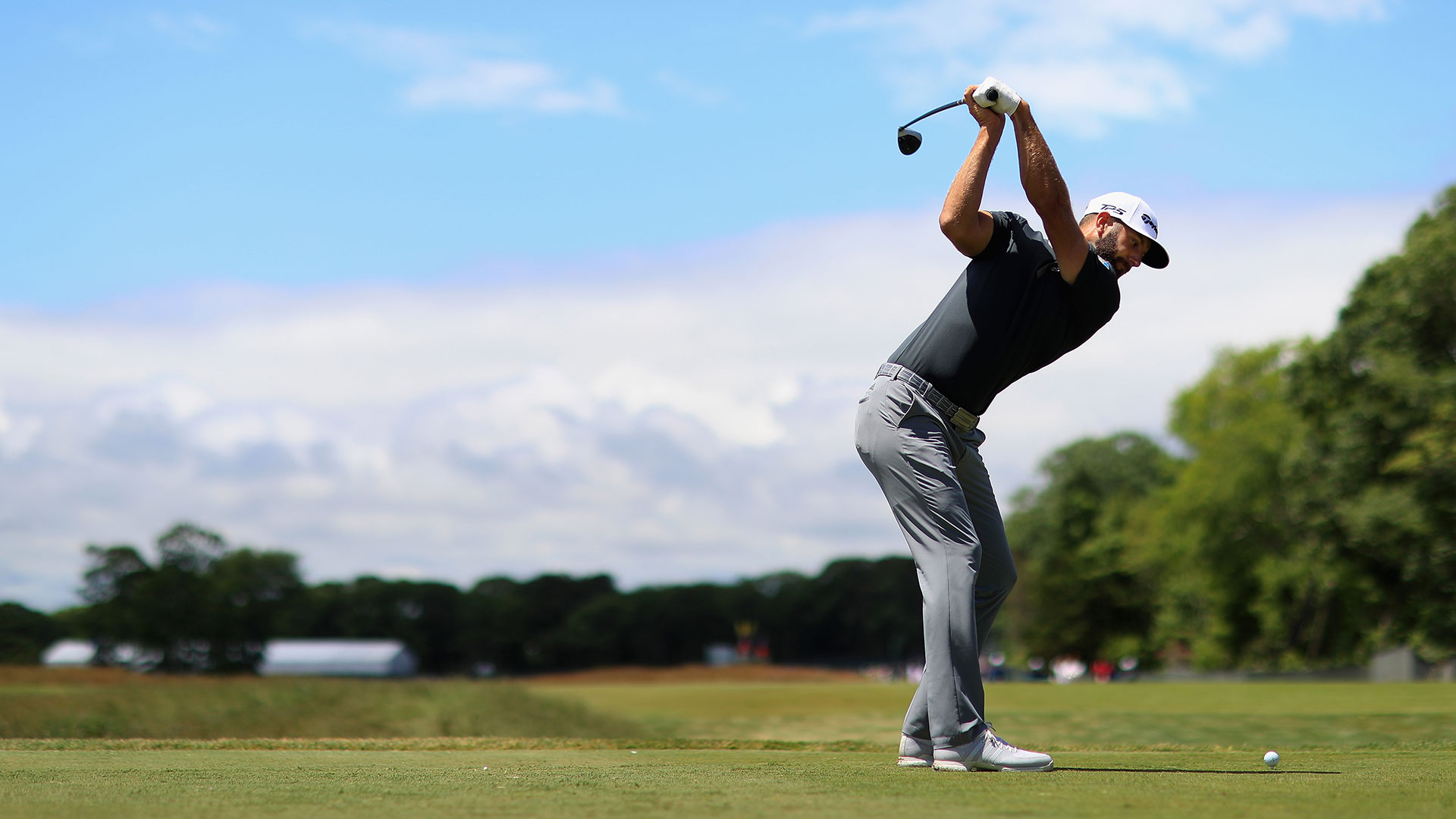 SOUTHAMPTON, N.Y. – Dustin Johnson handled the worst of the weather and wound up as the sole survivor to par at the U.S. Open, taking a four-shot lead into the weekend at Shinnecock Hills with plenty of reminders of how it can all go wrong.

Some of them from Johnson's own experiences.

Most came from the final hours Friday in pristine weather from those trying to catch him.

Johnson endured the wind and two hours of rain that made Shinnecock play even longer by dropping only one shot, never putting himself in position to make a big number and holing a 45-foot birdie putt on the par-3 seventh that carried him to a 3-under 67.

''You've got to play really good golf if you want to shoot a good score, and I like where par is a good score on every hole, no matter what club you've got in your hand, what hole it is,'' Johnson said.

No matter the weather, Shinnecock can punish anyone in a New York minute.

Ian Poulter was one shot out of the lead and in the middle of the fairway with two holes to go when one bad shot led to a few more that were even worse - a bunker shot over the green, a chunk into the hay, a chop short of the green and a triple bogey on No. 8. He made bogey on his last hole for a 72.

''There's a disaster on every single hole,'' Poulter said.

That left Charley Hoffman the only other player under par until he missed the 18th fairway and had to make a 5-footer to escape with bogey and a 69.

Johnson was at 4-under 136 as he goes after his second U.S. Open in three years.

Tiger Woods won't be around to see how it turns out, and he had plenty of company.

Woods closed with back-to-back birdies to salvage a 72. He still missed the cut in a major for the fifth time in his last eight tries, this time by two shots. Rory McIlroy missed the cut for the third straight year in the U.S. Open, unable to recover from his opening 80.

Jordan Spieth joined them in the most unlikely fashion. He took three shots to get up the slope and onto the 10th green, making double bogey. He was three shots over the cut line with six holes to play when he ran off four straight birdies to get inside the number - only to three-putt for bogey on the 17th, stub a chip from the collar of a bunker on the 18th and miss the par putt for a 71. He had not missed the cut in a major since the 2014 PGA Championship.

Scott Piercy, a runner-up to Johnson at Oakmont two years ago, had a 71 and will play in the final group with him Saturday. Piercy's day was not without regrets, especially when he three-putted from 4 feet for bogey on the par-5 16th. He was at even-par 140, along with Hoffman (69).

Plenty of others were poised take advantage if Johnson slipped, or if more pure weather arrived to allow them to make a move.

Defending champion Brooks Koepka made six birdies over his last 11 holes for a 66, matching Tommy Fleetwood for the low round of the tournament. They were at 141, along with Henrik Stenson and Justin Rose, each with a 70, and Poulter.

Rose also was under par until closing with successive bogeys. With 36 holes to play, he wasn't overly concerned about tracking down the No. 1 player in the world.

''You just saw what happened to Ian Poulter five minutes ago. That could happen to DJ,'' Rose said. ''I'm not saying it's going to, but it could. That's the nature of the U.S. Open. So hang around is often the best form of attack.''

Johnson knows that all too well.

He had a three-shot lead at Pebble Beach in the 2010 U.S. Open and lost it all on the second hole with a triple bogey, and then compounded mistakes by trying to drive the green on the next two holes. He shot 82. He has endured more than his share of bad luck, bad breaks and bad shots in the majors.

His outlook at Shinnecock Hills has been built on patience and being practical. One example was Thursday, when his ball was hitting up in thick grass, and he put back a club that might have reached the green and used wedge to get it back in play. He made bogey, but he took double bogey or worse out of the equation.

''I never want to make doubles,'' Johnson said. ''Around here, it seems like when I do get out of position, I'm just trying to do everything I can to get it back into position, not try to push it, and just give myself a decent look ... something on the green where I can have a look at par.

''I want to make things as easy as possible, even though they don't get any easier.''

Johnson is coming off a six-shot victory at the St. Jude Classic, and no U.S. Open champion has ever won the week before on the PGA Tour.

But this is far from over. Johnson knows that as well as anyone. So does Rose, who overcame an eight-shot deficit against Johnson in the final round in Shanghai last fall at the HSBC Champions, or even Stenson, who played with Johnson in that final round.