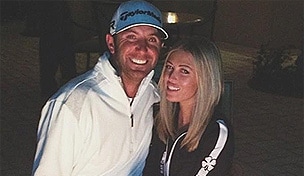 Getty Images
VIRGINIA WATER, ENGLAND - MAY 19: Former footballer and ex West Ham United manager Gianfranco Zola (L) takes some advice from Francesco Molinari of Italy during the Pro-Am round prior to the BMW PGA Championship on the West Course at Wentworth on May 19, 2010 in Virginia Water, England. (Photo by Andrew Redington/Getty Images)  -

Dustin Johnson has taken his 'PG' relationship public ... that is, his canoodling with Paulina Gretzky. Johnson tweeted this picture (see below) Wednesday, calling Gretzky his 'baby.' If that's not an official proclamation of exclusivity, we don't know what is.

Gretzky was first seen following Johnson around the Plantation Course at Kapalua in the season-opening Tournament of Champions. When asked about his relationship with her after the tournament, Johnson responded, “Does it matter?” When informed that inquiring minds wanted to know, he followed, “I don’t know who you’re talking about,” while a huge smile splashed across his face.

Looks like they're enjoying yet another day in paradise.