Eight huge questions for golf in 2018 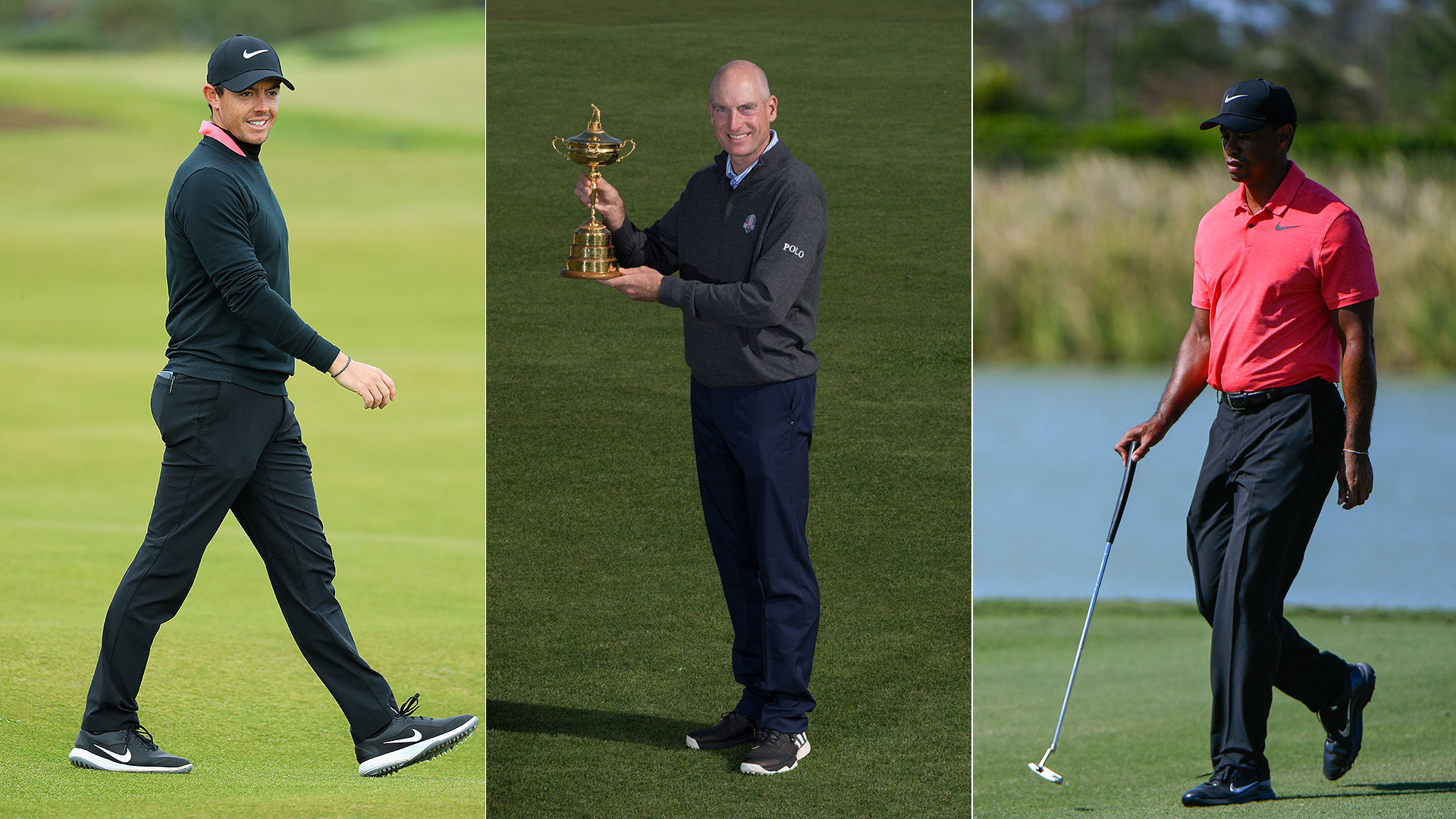 A new year means new storylines. And though some might wish 2017 never ended (here’s looking at you, JT), others couldn’t wait for the calendar to flip to January 1.

Here are eight burning questions as we roll into 2018:

It’s the most-anticipated event of 2018, and it’s not particularly close. The Americans haven’t won a Ryder Cup on foreign soil since 1993, a squad that was captained, coincidentally, by Tom Watson, whose disastrous reign was the impetus for this U.S. revival. Over the past two international team competitions, the Americans have won by a combined score of 36-22.

Promisingly, the same core will make the trip to France in September, where they will take on a European team headlined by Rory McIlroy, Jon Rahm and Tommy Fleetwood, but whose foundation is built on aging leaders such as Henrik Stenson, Justin Rose and Sergio Garcia.

Never has snapping the U.S. team’s 25-year drought seemed more attainable. Which only adds to the pressure.

2. What Does Tiger Have Left in the Tank?

Here we are again, contemplating Woods’ short- and long-term future an an auspicious return at the Hero World Challenge. We did this very thing last year … except this time it feels different, more promising, after he showed plenty of speed following his last-ditch fusion surgery and vowed to go it alone with his swing.

That last part is important: Over the past few years, it was painfully clear that Woods’ brilliant golf mind was cluttered (remember “release patterns”?) as he morphed from artist to scientist. Woods’ holiday news dump that he’s ditching swing coach Chris Como was welcome news – not because Como had Woods on the wrong path but because it shows that Woods is once again taking ownership of his game, that he’s relying more on his instincts and less on technique.

As of this writing, it’s not yet known what the early part of his 2018 schedule will look like, but here’s hoping (perhaps unrealistically) that it doesn’t include Torrey Pines or any unnecessary international travel. He has only one chance to make this “comeback” work, so he needs to pick his spots where he can fine-tune for the majors.

3. Is It Make-Or-Break Time for Rory?

The former world No. 1 was so out of sorts by the end of his disappointing 2017 campaign that he decided to shut it down for the last three months of the year. That should have been ample time to heal both his injured rib and his battered psyche.

Instead of challenging Spieth as golf’s alpha dog, McIlroy hasn’t looked like the same dominant player over the past few seasons, his hot streak in the 2016 playoffs skewing what was another pedestrian year. Injuries have been a factor, no doubt, but the holes in his game (shaky putting and shoddy wedge play) were obvious, and his occasional disappearing acts prompted some to question his motivation and desire.

Announcing an ambitious, PGA Tour-centric schedule with eight events in the lead-up to the Masters suggests that the fire is back, and hopefully he’ll be sharp by early April.

The game is more interesting with Rory in the mix.

4. What Will Justin Thomas Do For an Encore?

At this time last year, Thomas was among the Tour’s most promising up-and-comers whose only titles had come in Malaysia. He matched that win total with a Hawaiian doubleheader, then kept rolling with three more victories, including his first major at the PGA, to sweep the FedExCup and Player of the Year honors. So complete was his game, he checked off nearly all of his individual goals.

Thomas has always thrived when playing with a Kentucky-sized chip on his shoulder, but slights are hard to find now. He’s the third-ranked player in the world, and no one refers to him as merely Jordan Spieth’s good buddy.

Where will his edge come from? That’s for Thomas to learn this year, his first as a bona fide superstar.

5. How Will Lexi (and Lydia) Rebound?

No player endured more on-course heartbreak than Thompson, the 22-year-old mega-talent whose self-inflicted miscues in bookend big events cost her a major, Player of the Year and the No. 1 ranking. (And that doesn’t even include the off-course distraction of her mother, Judy, being treated for uterine cancer.)

Sure, that’s a lot of scar tissue for someone so young, but Thompson is unlikely to be so careless again, either while marking her ball or attempting 2-footers.

She has all of the physical tools to take over the tour. (Despite her various blunders, she managed two victories and six runners-up last year.) What a story it’d be in 2018 if she finally does.

Though Thompson has never reached world No. 1, Ko is trying to return to the top after her 84-week run ended in June.

By any measure, 2017 was a massive disappointment for Ko, who went winless and baffled observers by changing swing coaches, equipment and caddies. Unlike Thompson, Ko doesn’t have the power to make up for average iron play and putting. If those areas don’t improve, her slide seems likely to continue, especially with the emergence of even more young South Korean talent.

6. What’s Next for Jordan Spieth?

The Golden Child is not a kid anymore – he’s engaged to high school sweetheart Annie Verrett – and his resume is all grown up, too.

His memorable run to the claret jug leaves him only one major shy of the career Grand Slam, and at 24, he’s still on a pace that puts him in the same conversation as Jack and Tiger.

Spieth’s game took a massive step forward in 2017. Viewed by many as just a red-hot putter, he became the best iron player in the game, leading the Tour in strokes gained-approach the green. Interestingly, it was his putter that cost him at times last year, and it’s fair to assume that he spent the majority of his offseason working on his stroke and his driver.

His average is nearly three wins a year, with a boatload of other top-10s, so count on similar production in 2018. The only question is whether he adds to his major haul.

7. Are the Governing Bodies and Equipment Manufacturers on a Collision Course?

It sure seems that way, with the endless chatter about the distance that today’s high-performance golf balls fly. (Which is a gross oversimplification of the issue, but that’s a column for another day.) That the USGA’s Mike Davis opined that the impact of the distance boom has been “horrible” set off alarms in Fairhaven and Carlsbad, though any implementation of a reduced-flight ball would be met with resistance, lawsuits and confusion.

It’s a messy situation that affects only about 20 players on the PGA Tour – no one on the LPGA or Champions circuit, and especially no one at your local club, is complaining about the ball going too far – but the optics are terrible when par 5s are reduced to driver-7-iron.

What’s the solution? Hey, beats us, but distance figures to be a hot topic all year, as will the revamped Rules of Golf set to go into effect in 2019.

8. Who is This Year’s Xander Schauffele?

Tip of the cap to those of you who tabbed Schauffele as the breakout star of a rookie class that included Bryson DeChambeau, Ollie Schniederjans and Wesley Bryan.

Because we sure didn’t see it coming.

Fighting for his card midway through the year, Schauffele starred at the U.S. Open, won his first title at the Greenbrier and then beat the Tour’s best at East Lake.

This year’s list of newcomers includes former U.S. Amateur champion Peter Uihlein, Keith Mitchell and Aaron Wise. (Technically, Beau Hossler isn’t a rookie, but he already has a pair of top-10s this season.) Austin Cook has already won once, in Sea Island, and he won’t be the only newbie to hoist some hardware.