Els: McIlroy withdrawal wasn't 'the right thing to do' 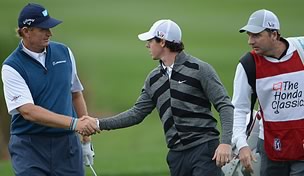 PALM BEACH GARDENS, Fla. – After completing his second round at the Honda Classic, reigning British Open champion Ernie Els did not mince words about playing partner Rory McIlroy's decision to withdraw after only eight holes Friday.

'I'm a great fan of Rory's, but I don't think that was the right thing to do,' Els explained after firing an even-par 70, leaving him at 1 under for the tournament.

Earlier Friday morning, the world No. 1 walked off the 18th hole suddenly, after playing the first eight holes of the day in 7 over. Els indicated that not much of a reason was given to him and group member Mark Wilson before the Ulsterman departed.

'We just shook hands,' he explained. 'I was dropping my ball and I realized he wasn't dropping his ball. I thought maybe his ball crossed further up. When I hit my fourth shot, he just came up and said, 'Here's my card, I'm out of here.''

After withdrawing, McIlroy released a statement citing wisdom tooth pain as the reason for his early exit. When informed of the reason, the South African appeared more receptive to McIlroy's decision to withdraw.

'If something was bothering him ... all credit to him trying to play through whatever pain he was in,' he noted. 'He obviously couldn't do it after nine holes anymore. Toothache, it's not fun I guess.'

The four-time major champion did empathize somewhat with the plight of McIlroy, who now has yet to play more than two rounds in any of his three starts in 2013.

'He's feeling terrible about it, I know he is. That's the last thing he wants to do is walk off,' he added. 'Obviously something was seriously bothering him.'

When pressed, Els was unable to recall a situation where he opted for an early departure as McIlroy did Friday.

'I've been around a long time, but I don't think so,' he explained. 'I don't recall walking off, no.'