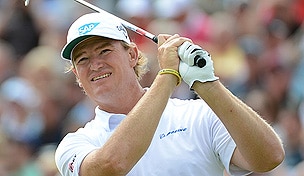 Ernie Els would have been in the European Tour’s top 10 on last year’s Race to Dubai standings entering the final tournament of the season. Would have been – except he didn’t have enough starts.

That may change this year. Els is planning to play each of the next three weeks, making appearances at the Volvo Golf Champions, Abu Dhabi HSBC Golf Championship and Commercial Bank Qatar Masters, the last two of which he didn’t play last season.

European Tour members need a minimum of 12 starts to qualify for the season-ending DP World Tour Championship. As the reigning British Open champion, Els is already qualified for all four major championships and three WGC events – all Euro Tour-sanctioned – which would put him at 10. He is also expected to play the BMW PGA Championship and Dunhill Links Championship, if not the Scottish Open, as well, which should qualify him for the finale in Dubai.

Els is additionally expected to maintain PGA Tour membership, which requires 15 starts, though the majors and WGCs are co-sanctioned between both tours.