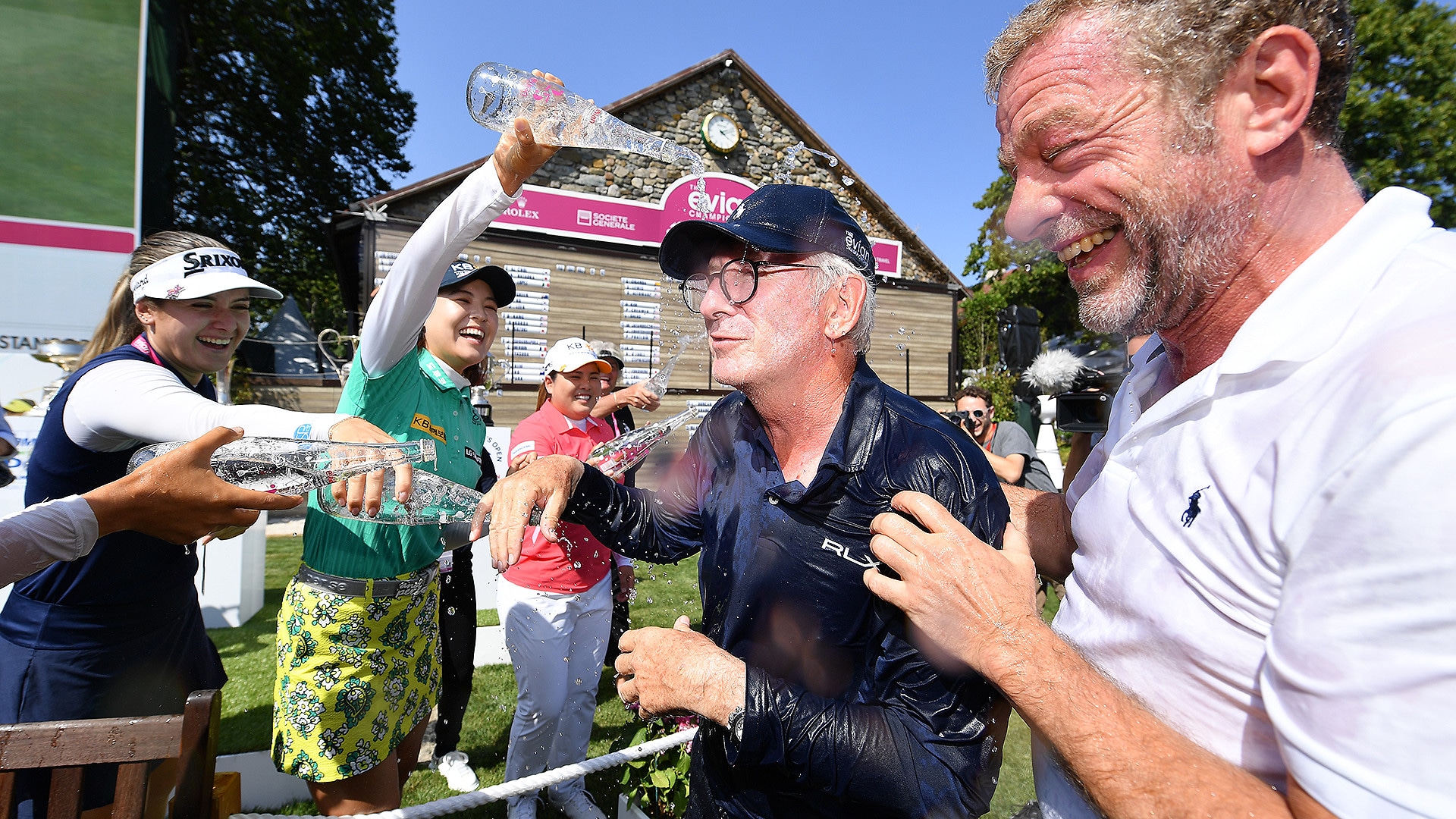 This did so Wednesday with a toast celebrating the event’s 25-year anniversary.

“I think the best way to go on living a long time is drink champagne,” Bungert, pictured above right, cracked. “As well as Evian water.”

Riboud, pictured above left, is the honorary chairman of Groupe Danone, the parent company of Evian water. He’s also a big supporter of women’s golf. When he launched the tournament, few imagined it would become one of the LPGA’s major championships. Riboud said it wasn’t easy getting support at the start.

“Today, it’s very fashionable,” Riboud said. “Now you go back 25 years ago ... nobody wants to help us create the tournament.”

Helen Alfredsson won the inaugural event in 1994, back when it was a Ladies European Tour event. Laura Davies won in ’95 and ’96. With first-class hospitality, glitzy parties, the festive resort atmosphere and spectacular views of Lake Geneva, it didn’t take long to become a popular stop. The LPGA stepped in to co-sanction the event in 2000, with Annika Sorenstam immediately winning. Juli Inkster, Karrie Webb, Paula Creamer and Inbee Park would all add their names to the trophy before the LPGA declared it a major in 2013. A skydiver dropped on to the 18th green that year with Norway’s flag, presenting it to Suzann Pettersen as the winner.

“I have zero doubt in my mind that five, 10, 15, 20 years from now, young women all around the world will have a dream to make it to ‘The Mountain,’ to see that skydiver parachuting down with their country’s flag at championship’s end,” LPGA commissioner Mike Whan said sharing his vision of the event as a major.

Evian has faced some challenges meeting expectations as a major, with weather plaguing the event and with questions about the course as a supreme test, but Riboud’s and Bungert’s devotion to the event and to women’s golf was always clear. The purse is up to $4.1 million, the third largest in women’s golf.

“We consider this tournament as a family,” Riboud said.

Angela Stanford relished having her name added to the impressive list of winners of the event last year.

“There is so much tradition built in, and they love women's golf and want to elevate us,” Stanford said Wednesday. “It's been very cool.”

“We are already thinking about what we going to do next year,” he said.