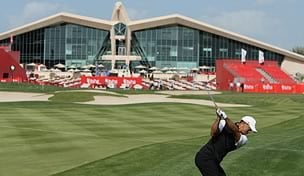 Getty Images
KAPALUA, HI - JANUARY 07: Geoff Ogilvy of Australia plays a shot during the first round of the SBS Championship at the Plantation course on January 7, 2010 in Kapalua, Maui,Hawaii. (Photo by Sam Greenwood/Getty Images)  -

This week the focus of the fantasy world is split. Our experts share their picks for the Humana Challenge here, while their picks for the European Tour's Abu Dhabi HSBC Golf Championship are below. Each week, a panel of experts will offer up their picks from four groups of players based on Golf Channel's new fantasy game, Fantasy Challenge. We will also keep track of their scores and standings. The panel includes: senior writers Rex Hoggard, Randall Mell and Jason Sobel; contributors John Hawkins and Win McMurry; editorial director Jay Coffin; 'Morning Drive' host Gary Williams and staff writer Ryan Lavner.

Group 1: Rory McIlroy: The number one player in the world - and runner-up last year - has karma on his side after coming down Tuesday night to watch fellow Irishman Paul McGinley be named European Ryder Cup captain.

Group 2: George Coetzee: He shared sixth place here last year and has been playing very well over the last few months. In his last start, he tied for 10th at the Alfred Dunhill Championship and was runner-up at the end of November in the SA Open Championship.

Group 1: Tiger Woods: Give me the Nike guy who's been using their clubs for years over the one who just recently got fitted.

Group 2: Thorbjorn Olesen: Speaking of Nike, the company already has a win from Russell Henley; it could get another from Olesen before the big guns get going.

Group 3: David Howell: Here's my Comeback Player of the Year candidate, who has always been a strong putter when it mattered.

Group 4: Joel Sjoholm: We don't get to pick many Euro Tour events, so anytime I have a chance to get my man Swedish Toro in Group 4, that's a no-brainer.

Group 1: Rory McIlroy: New year, new equipment, same old Rory. He's come close in Abu Dhabi before (having finished runner-up the last two years) and could quiet any lingering questions about his jump to the Swoosh with another solid week in the Middle East.

Group 2: Francesco Molinari: He may be Europe's most underrated player, and after opening the season with a tie for ninth at the Volvo Golf Champions he's quietly adding to that legacy.

Group 3: Joost Luiten: The Dutchman has a solid resume in the desert and has missed just five cuts in the last 12 months.

Group 4: Matthew Baldwin: After a steady rookie season on the European Tour in 2012, many insiders feel it's time for the Englishman to take the next step and contend in a big event.