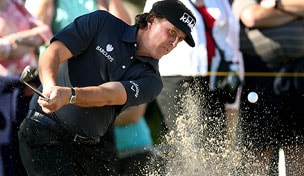 This week the fantasy golf schedule has two events, and while our experts' thoughts on the Commercial Bank Qatar Masters can be seen here, below are their choices for the Farmers Insurance Open, the latest destination on the PGA Tour's West Coast Swing. Each week, a panel of experts will offer up their picks from four groups of players based on Golf Channel's new fantasy game, Fantasy Challenge. We will also keep track of their scores and standings. The panel includes: senior writers Rex Hoggard, Randall Mell and Jason Sobel; contributors John Hawkins and Win McMurry; editorial director Jay Coffin; 'Morning Drive' host Gary Williams and staff writer Ryan Lavner.

Group 1: Phil Mickelson: In what should be another tumultuous week in the life of Lefty, expect his golf game to make the biggest headlines.

Group 2: Charles Howell III: Slam-dunk, no-brainer pick of the week, with a T-3 and T-2 in his first two starts of the season.

Group 3: Pat Perez: I was on Perez last week at hte Humana and I'm often a week off, so here's hoping I outsmart myself this time - or something like that.

Group 4: Nicholas Thompson: Nitro Nick is coming off a great week in the desert, now proving to people that he's more than just Lexi's big brother.

Group 1: Bubba Watson: Took a two-week break after a T-4 in Kapalua. Former winner here (2011) that followed that up with a T-13 finish last year.

Group 3: Jimmy Walker: Hasn't cracked the top 20 in an event yet, but has seven of eight rounds in the 60s so far. Tied for eighth here last year.

Group 4: Billy Horschel: T-10 finish at PGA West was a continuation of his good play that dates back to last fall.

Group 1: Nick Watney: Strong record at Torrey Pines that includes a win in 2009.

Group 2: Ben Crane: Another former winner at Torrey Pines (2010) that will enjoy the good mojo.

Group 3: Harris English: Hey, if Russell Henley likes this guy's chances of being something special...

Group 4: Patrick Cantlay: This feels like a year for the young 'uns, and it's time for Cantlay to make another statement.

Group 1: Tiger Woods: Forget about that missed cut last week in Abu Dhabi. 'Red Shirt' has seven victories at Torrey Pines as a professional, including his historic 2008 U.S. Open triumph.

Group 2: Bill Haas: He's finished inside the top 10 the last two years at Torrey Pines and has missed the cut just once in eight starts at the SoCal muni.

Group 3: Y.E. Yang: This is all about trending in the right direction. Yang finished 2012 with a series of strong finishes in Asia, and picked up where he left off with a tie for 20th at his 2013 debut at the Sony Open that featured a closing 63.

Group 4: Jerry Kelly: Playing off a one-time exemption for career earnings, Kelly seems poised to return to the top 125 in earnings.