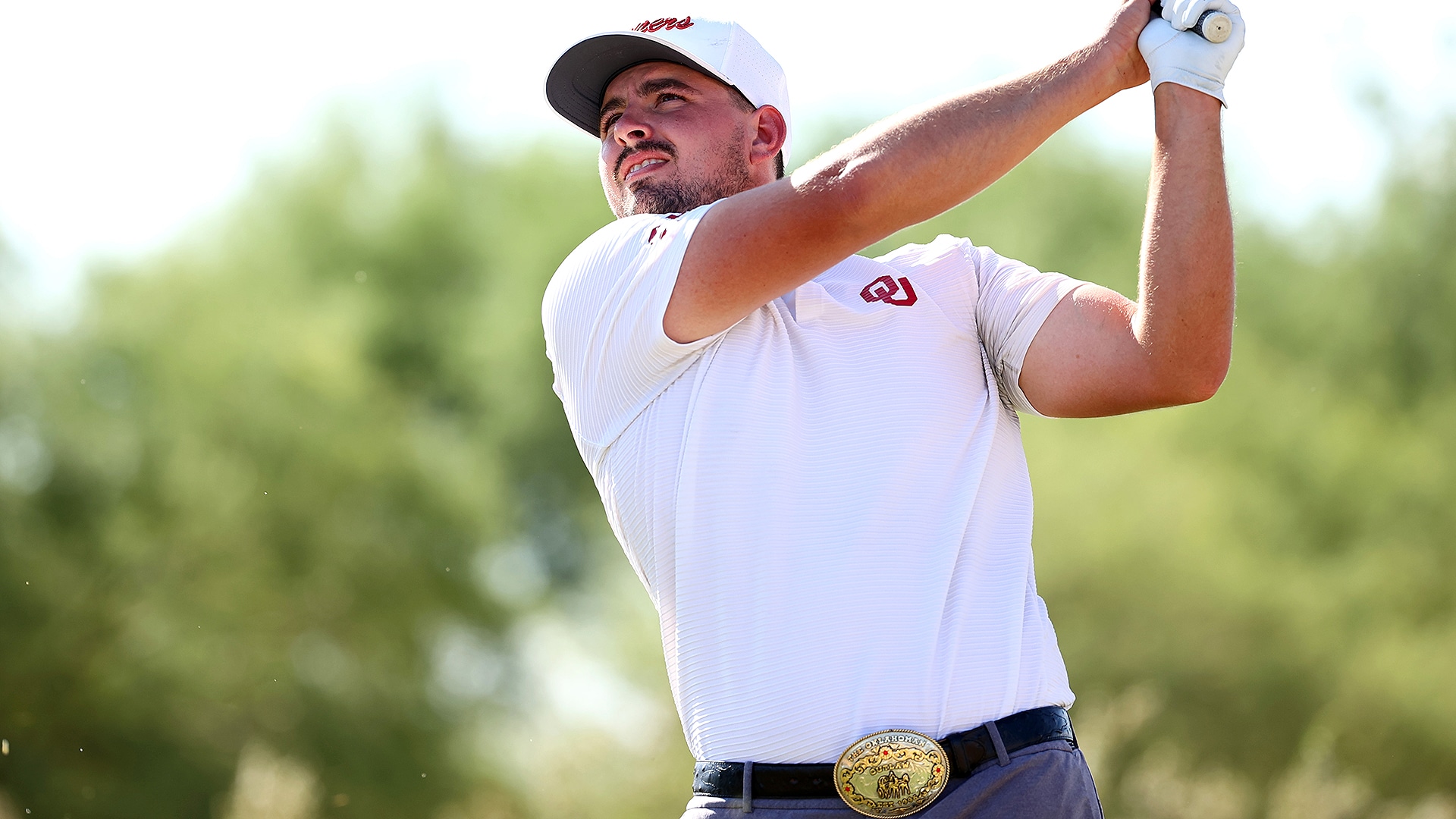 That was the text message that Quade Cummins sent Oklahoma head coach Ryan Hybl last March when it was decided that Cummins would be allowed to return for a sixth season. Cummins was the sixth man for the Sooners when they won it all in 2017 at Rich Harvest Farms, but with the pandemic cutting short his initial redshirt-senior season, there was no hesitation.

“Watching, you don't get the same emotions,” Cummins said. “You don't have those pressure putts. I just wanted to be able to feel that.”

Cummins got that chance Tuesday at Grayhawk Golf Club, sinking the clinching birdie putt to send Oklahoma to the NCAA Championship final, where the Sooners will face Pepperdine on Wednesday afternoon.

With two points on the board for both Oklahoma and Arizona State in their semifinal matchup, it all came down to Cummins and Sun Devils junior Cameron Sisk. The 25-year-old Sooner from Weatherford, Oklahoma, led Sisk, 1 up, with two holes to play when Sisk opted for iron off the tee at the 330-yard, par-4 17th hole and tugged it slightly into the rough. Again, Cummins didn’t blink.

“I was hitting driver the entire time,” said Cummins, who drove the green to set up his winning two-putt from 50 feet.

His birdie roll came from about 7 feet, though Cummins said it felt double that. When it dropped, sealing a 3-2 victory over the host Sun Devils, Cummins dropped the hammer with his right fist.

That right there was why Cummins came back.

“There were so many moments like that today, but at that moment, that's kind of what's going through my mind,” Hybl said. “I'm like, you just keep doing what you're doing and what we've been practicing on, what he's been visualizing for such a long time. He's wanted to have that moment. In 2017, he was over on the sidelines, just rooting us on, and he always envisioned himself being able to do that and make that putt, so to be able to see him do that is special.”

Oklahoma, which had gotten bounced in the first round in each of its past two NCAA match-play appearances, also received semifinal victories Tuesday from senior Jonathan Brightwell, who transferred from UNCG last summer, and sophomore Logan McAllister. Ben Lorenz and Garett Reband lost their matches, with Reband, who also opted to return for an extra year, struggling mightily with his game, particularly off the tee, in a 5-and-4 loss to Kevin Yu.

Though Cummins, Brightwell and McAllister are a combined 23-4 in match play this season, the Sooners will need more from Reband and Lorenz if they are to defeat Pepperdine, which beat Oklahoma in the East Lake Cup final, 4-1, last October. Cummins was the only Oklahoma player to win his match that day, and he didn’t even get to finish it.

“Last time we played them in match play they got us pretty good,” Cummins said. “So, you know, we're not satisfied just making it to the finals. We're here to win.” 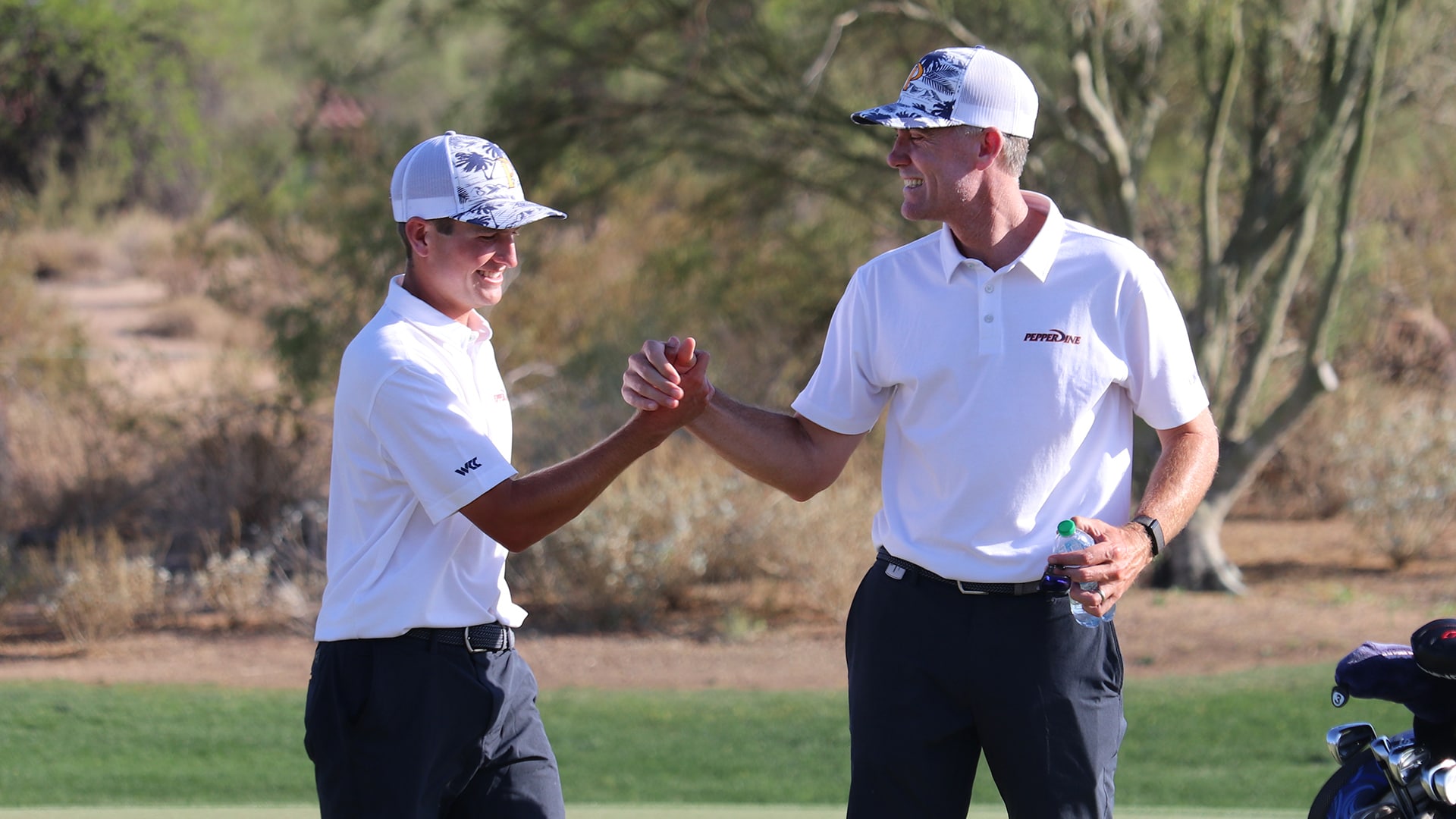 Not present for the Waves’ victory at East Lake was Pepperdine’s Clay Feagler, another super senior. Unlike Cummins, Feagler wasn’t a shoo-in to come back to school. His game was in poor shape and he had missed two straight tournaments for the top-ranked Waves when last season was canceled.

“I was so bummed,” said Feagler, who also had watched star teammate Sahith Theegala make the leap to the pro ranks. “I didn’t really want to go back. I wasn’t making the lineup anyway and was kind of just down in the dumps.”

It wasn’t until a few weeks after the NCAA’s announcement that Feagler’s mother, Caryn, talked her son into returning.

“You have this opportunity,” Caryn Feagler told Clay. “You should seize it.”

Initially, Feagler didn’t take advantage. He made just half the starting lineups for Pepperdine last fall, and he didn’t even crack the top 50 at Maridoe while competing as an individual. He again debated turning pro over winter break.

“I was contemplating whether I wanted to keep going,” Feagler said. “I don’t know, I just wasn’t in a good place mentally.”

But Feagler continued to stick it out. He started working more with Pepperdine’s mental coach. Neale Smith, his instructor from Alta Vista Country Club in Riverside, was also a big help, as were some classes for Feagler's psychology minor, which Feagler added after needing credit hours because of the extra year.

He didn’t see immediate results, but after tying for fifth in the individual tournament at The Prestige, Feagler found a spark. He translated that moment in Palm Springs into more solid golf, and he kept trending, eventually winning a qualifying tournament for the Mackenzie Tour – that full status will now be for the U.S.-based Forme Tour this summer – in a playoff at the Wigwam Resort two months ago in Litchfield Park, Arizona.

“Having that off of his shoulders,” Caryn Feagler said, “to get a win again and to get job security, that helped him get to a point that he was feeling better, not just about golf but everything.”

Added Clay: “Winning that qualifier gave me all the confidence in the world.”

Feagler hasn’t lost an ounce of that self-belief this week in Scottsdale. (It must be something about the desert.) He not only steamrolled Florida State senior Vincent Norrman in Tuesday morning’s quarterfinals, but he rallied against another elite college player, Oklahoma State senior Austin Eckroat, in the afternoon. Two down through seven holes, Feagler made a hole-in-one from 188 yards at the par-3 eighth with an 8-iron to begin a stretch of five straight won holes.

Feagler’s 2-and-1 win over Eckroat got the first point on the board for the Waves against the Cowboys. Joe Highsmith, who delivered a clutch shot of his own out of a fairway bunker at the par-4 18th to set up a winning two-putt over Aman Gupta, and Dylan Menante also won their semifinal matches in a 3-0-2 win.

Now, Pepperdine, which won its only NCAA title in 1997, will get a chance to do what many expected the Waves to do last spring.

“It was great to be favorites last year, but we didn’t get to finish,” Beard said. “Now, to come here and put it all together, losing Sahith but keeping Clay and Josh [McCarthy, who isn’t in the lineup this week], I think that these guys owned it. They felt like we should be here, and I think that’s a big reason for why we’re here.”

It’s why Feagler is here.

It’s why Cummins is here. 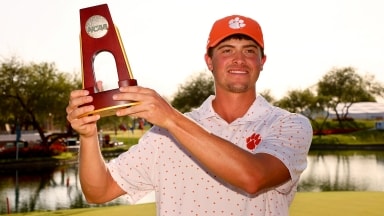