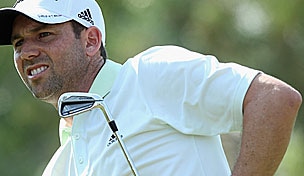 Getty Images
VILAMOURA, PORTUGAL - OCTOBER 17: Colin Montgomerie of Scotland plays his fourth shot on the 18th hole during the third round of the Portugal Masters at the Oceanico Victoria Golf Course on October 17, 2009 in Vilamoura, Portugal. (Photo by Andrew Redington/Getty Images)  -

This week the PGA Tour remains in California for the Northern Trust Open. Players will face Riviera Country Club, one of the more historical regular venues utilized by the Tour each year. 'Hogan's Alley' has been the host of a series of major champions, and last year was the site of a memorable 3-man playoff between Phil Mickelson, Keegan Bradley and eventual winner Bill Haas. With that in mind, here is a look inside the numbers to see which players may contend for the title and help your Golf Channel Fantasy Challenge team in the process:

• As @HookEmNWhoDey pointed out to me this week on Twitter (you can follow me @WillGrayGC), last year's scoring was significantly higher than years past; the 7 under total that Haas shot was a full five strokes higher than any winning total here since 2003 as players struggled with windy conditions. Though only five players broke 70 in the final round, one of them was Sergio Garcia, whose final-round 64 was by far the best round of the day, and moved him from a tie for 49th all the way into a tie for fourth.

• The last few years have shown the value of holing putts at Riviera, as Haas (2012) and Phil Mickelson (2010) both led the field in putts per round en route to victory, and Vijay Singh held the same title in 2011 while finishing second overall. With that in mind, two possible sleepers may be Chris Kirk and Bryce Molder, who rank second and third, respectively, in strokes gained putting entering the week and who are both coming off stellar weekends at Pebble Beach.

• Fantasy players should note that first-time winners at Riviera are few and far between, and this week's star-studded field will likely mean that trend will continue. Only twice in the last 24 years has a player notched their first career PGA Tour victory here, the last being Len Mattiace in 2002.

• After failing to make a cut the whole month of July 2012, Kevin Stadler has seen a remarkable turnaround in his game. A T-11 finish at the Reno-Tahoe Open led to a pair of top-10 finishes during the FedEx Cup Playoffs and a solid Fall Series to end his 2012 campaign. This season, Stadler has picked up right where he left off, backing up a T-11 finish in Phoenix with a T-3 showing last week at Pebble Beach, his best result on Tour since a playoff loss at the 2009 Wyndham Championship.

• The undisputed modern-day king of Riviera is none other than Fred Couples. The two-time Northern Trust champ made his first start here in 1982 - seven years before Rory McIlroy was born - and in 30 career starts has racked up a whopping 14 top-10 finishes. By comparison, that's the same amount of top 10s that Phil Mickelson (4), Tiger Woods (4), Luke Donald (3) and Ernie Els (3) have scored here in a combined 44 starts.