Featured pairings for Round 1 of Hyundai TOC 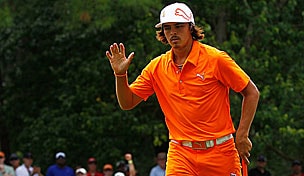 There are just 30 players in the field this week at the no-cut Hyundai Tournament of Champions, which begins Friday in Hawaii. Here are three pairings to watch during the first round on the Plantation Course at Kapalua (for complete tee times, click here):

Dufner is coming off a breakthrough season in which he won twice, missed only one cut and earned more than $4.8 million. Fowler also notched his first career PGA Tour title, at the Wells Fargo Championship, but a lingering back injury derailed what had been a promising season. This pairing is particularly juicy, however, because of their good-natured (and monthslong) feud on Twitter. If we’re lucky, there will be some friendly fire before and after Friday’s opening round.

This group may lack pyrotechnics, but both players are near-locks to be toward the top of the leaderboard come Monday evening. Kuchar, a winner at the Players, has a strong record at Kapalua, finishing T-6 and solo third in 2011 and ’10, respectively. Last year, in his first start on the Plantation Course, Simpson shot all four rounds in the 60s and finished T-3.

Kapalua is a bomber’s paradise, so it was little surprise to see these two titanium-denting talents paired together. The par-5 finishing hole on the Plantation Course has yielded 92 drives of 400-plus yards since 2003. Perhaps it’s no coincidence, then, that this week Golf Channel will debut a new graphic, “Landing Zone,” which will measure the yardage of tee shots, similar to the yellow first-down lines on NFL telecasts. Prepare for an impromptu long-drive contest.