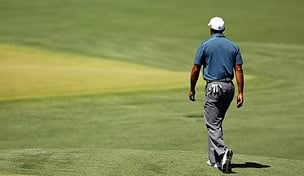 “If you need someone to blame, throw a rock in the air. You'll hit someone guilty” – U2’s Bono, 'Dirty Day'

AUGUSTA, Ga. – A bad bounce, a bad decision, a very bad moment at a place that eschews controversy and missteps.

The range of emotions under the iconic oak tree behind the Augusta National clubhouse early Saturday swirled like winds on Amen Corner – from stunned disbelief to distrust.

When Tiger Woods’ third shot at the par-5 15th caromed off the flag stick and into the pond late Friday afternoon, the worst outcome seemed to be a dropped shot or two. No one would have imagined that the world No. 1 would drop a haymaker on the entire game with his next move.

According to the Rules of Golf, Woods had three options after karma played its cruel joke. He could play from the drop zone, he could go back as far as he wanted on the line the ball crossed into the hazard, or he could drop closest to the spot of his original shot.

“I went down to the drop area, that wasn't going to be a good spot, because obviously it's into the grain, it's really grainy there. And it was a little bit wet,” Woods said following his second-round 71. “I went 2 yards further back and I took, tried to take 2 yards off the shot of what I felt I hit.”

In a court of golf law, that statement is akin to a plea of no contest, however unintended it may have been.

Closest to the spot of the original shot does not mean “2 yards,” or a few feet as the video replay suggests. Inevitably, officials and Woods arrived at the conclusion he’d taken an incorrect drop for his fifth shot at No. 15.

Where things get sideways is the club’s decision to adhere to Rule 33-7, which states, “A penalty of disqualification may in exceptional individual cases be waived, modified or imposed if the committee considers such action warranted.”

Officials were made aware of the possible infraction by a viewer before Woods completed his round, but after a review of the tape they decided he “complied with the rules.”

Woods’ unintended mea culpa with the media after the fact, however, prompted another review. After a meeting with Woods on Saturday morning at the club, officials decided he had taken an incorrect drop and he was assessed a two-stroke penalty, but he will play on.

“The committee had previously reviewed the information and made its initial determination prior to the finish of the player’s round,” Augusta National said in a statement.

What’s legal and what’s right are very much mutually exclusive in golf.

In 1968, on these same hallowed grounds, Roberto De Vicenzo signed for a score that was one stroke higher than what he’d actually shot and finished one stroke behind Bob Goalby.

Two years later, the Argentine was awarded the Bob Jones Award by the USGA for recognition of distinguished sportsmanship in golf. As Woods’ 1:45 p.m. ET tee time approached it was impossible not to imagine how De Vicenzo would respond to Saturday’s news; or Jones, who founded Augusta National.

In many ways it feels as if Augusta National should be given two strokes. After missing the violation on the initial review they failed to follow up with Woods, who clearly had nothing to hide and no idea he’d whiffed a drop, again.

Rule 33-7 was added in recent years to protect players, specifically against viewers calling in potential violations that could only be seen during high-definition broadcast, and officials were comfortable with the decision, if not the situation.

Perhaps, but one official told your scribe that in the two-plus years since rule makers created 33-7, the PGA Tour has not used the amendment once. Not once.

Earlier this season in Abu Dhabi, Woods ran afoul of the rules on another drop from a sandy area. In January, like he did on Friday at Augusta National, Woods failed to call a rules official in for review.

That Woods’ snafu occurred on the same day that officials issued a one-stroke penalty for slow play to 14-year-old Chinese amateur Tianlang Guan only feeds the public frenzy.

The Rules of Golf are many things, but above all else they are not capricious. Golf doesn’t do an expanded strike zone, officials don’t “swallow whistles” late in rounds and “letting them play” is not in the lexicon.

The decision to intervene and forego disqualification – the penalty for signing an incorrect scorecard, which Woods did – may have been the right thing, it may even have been just, but there was no escaping the pall the ruling has cast over the Masters, if not all of golf.

“It's like a Supreme Court ruling now, we’ve got precedent,” Arron Oberholser said on Golf Channel.

Miscues, however heinous, will now be scrutinized in a different light – “Sure I signed for a 65 instead of my 75, but the scorer got the math wrong as well. Give me a Rule 33-7 and let’s play away.”

Some say Woods should own the matter, withdraw from the event and defuse the scrutiny. But that would do nothing to change the perception, however unfair, that Augusta National is playing “Tiger rules,” and in fact could be interpreted as an insult toward the club.

Woods was the victim of a bad bounce and responsible for a bad drop, not what turned out to be a very bad day for golf.