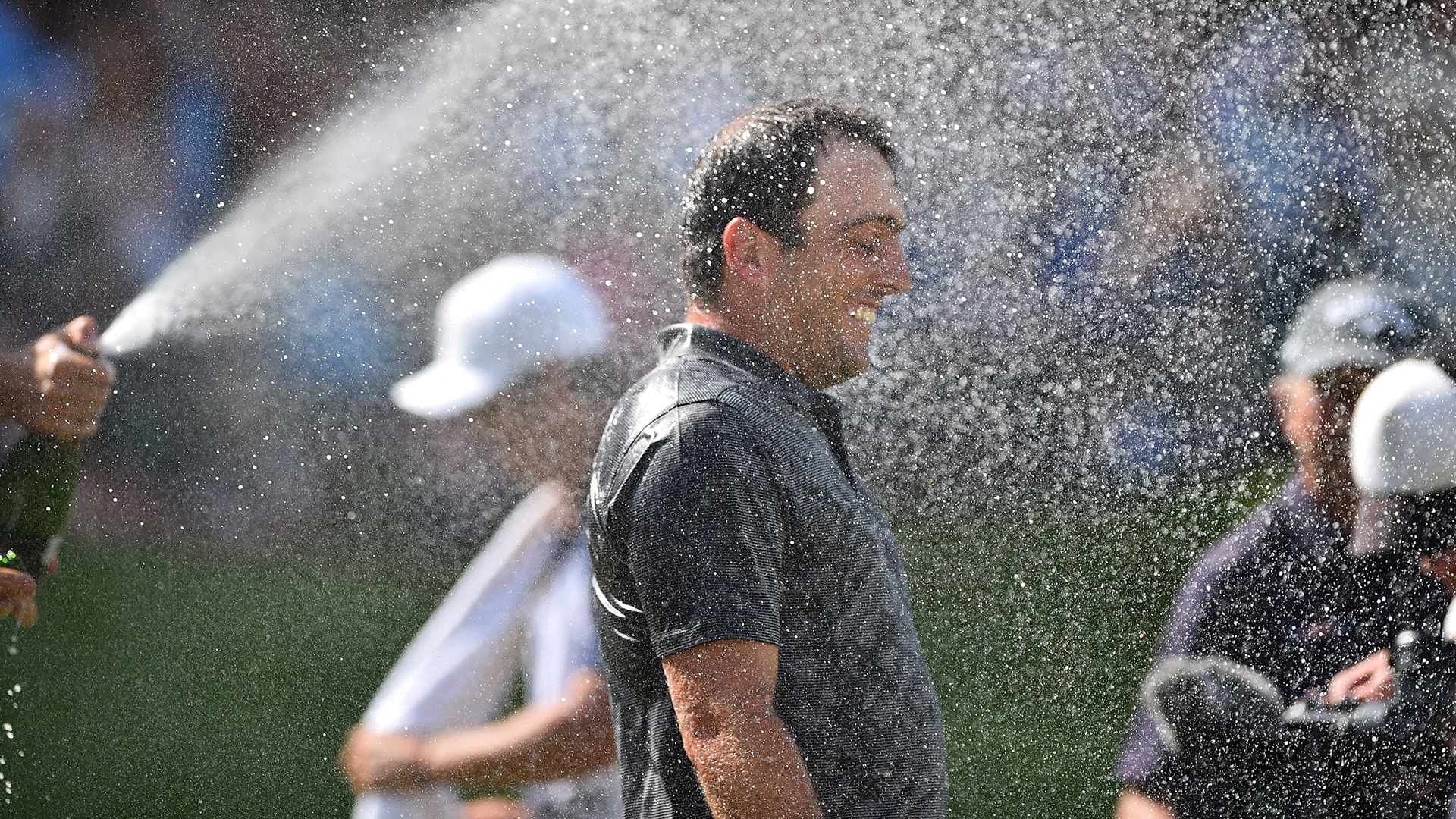 VIRGINIA WATER, England - Francesco Molinari's path to the biggest win of his career at the BMW PGA Championship was drama-free until he sized up his approach to the 72nd hole.

Rory McIlroy, his closest rival three strokes back, had just hit to 20 feet to set up an eagle chance. Molinari was between clubs for his third shot and faced a delicate wedge over the water protecting Wentworth's pretty 18th green.

His ball landed short of the pin and span back toward the water. The spectators held their collective breath - so did Molinari - but it came to rest on the fringe, just short of trouble.

''Just a bit of luck at the right time,'' Molinari said, with a smile.

After McIlroy came up inches short with his eagle putt, Molinari rolled in for par from 6 feet for a 4-under 68 that secured a two-stroke victory at Wentworth on Sunday. It was the fifth win of his career, and his most satisfying.

''If I could pick one tournament to win in my career, it would be this one,'' the Italian said at the prizegiving ceremony.

A Sunday shootout between Molinari and McIlroy at the European Tour's flagship event never really materialized.

They entered the final round tied for the lead on 13 under but while McIlroy sprayed his drives left and right, Molinari was the model of consistency and established a three-shot cushion by the turn after birdies at Nos. 3, 4 and 8.

From there on, it was a clinic in front-running from Molinari, who laid up when he needed to and picked up his only shot on the back nine with a tap-in birdie at the par-5 12th.

McIlroy birdied the par 5s at Nos. 17 and 18 but mounted his victory charge too late.

''I didn't feel intimidated at all,'' Molinari said of his head-to-head with the former world No. 1. ''It's just the last couple of holes, he's basically thinking eagle, eagle. I'm thinking par, par, and that makes the whole difference.

''Sometimes I just get too drawn on what the other guy is doing, and I was really good today, hitting good shots and focusing on my process and not worrying about anything else.''

Molinari played his final 44 holes bogey-free. He only dropped two shots all week, one of them coming on his first hole.

He will likely climb into the world's top 20 on Monday and has moved into the automatic qualifying places for the European team for the Ryder Cup, which he hasn't played since 2012 when Europe beat the United States in the so-called ''Miracle at Medinah.''

''I'm playing well enough that I shouldn't really worry too much about that,'' Molinari said. ''I should just keep doing my own thing and hopefully things will take care of themselves.''

Molinari previously had five top-10 finishes in the last six years at Wentworth, including being runner-up to Alex Noren last year.

On that occasion, Noren closed with a 10-under 62 and the Swede embarked on another last-day charge 12 months later, a fifth birdie of the day at No. 12 briefly drawing him to within two shots of Molinari.

It was the closest he came, with a bogey at the next virtually ending his bid for victory.

With a 67, Noren was tied for third with Lucas Bjerregaard (65), a stroke back from McIlroy.

McIlroy, the 2014 winner at Wentworth, played what he described as one of his best rounds of 2018 on Friday, a bogey-free 65 that left him with a three-shot lead.

He struggled off the tee in shooting 71 on Saturday and started the final round with errant drives on Nos. 1 and 3 (both right, into spectators) and No. 4 (left). After a bogey at No. 10, he was the only player in the top 10 over par but he birdied the three par 5s coming home to salvage what was otherwise a disappointing Sunday.