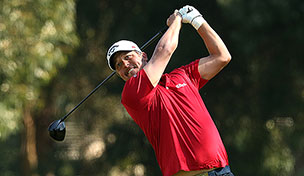 He left feeling good about his health and the state of his game but not so good about a disappointing ending.

Jacobson missed a 4-foot putt for par at the final hole that would have won him a spot in a playoff and a chance to win his second PGA Tour title.

“The last putt wasn’t very good, but it is what it is,” Jacobson said.

The Swede missed a 9-foot putt for birdie at the 17th.

“It was a disappointing finish for me, but I had a lot of fun on the back nine,” Jacobson said.

Jacobson tied for third a week after tying for seventh at the AT&T Pebble Beach National Pro-Am. That’s the good news for a guy who couldn’t play most of the last half of 2012 because of bulging discs in his back. His strong finish at Pebble Beach got him into this week’s Accenture Match Play Championship.