Nelly Korda had her sights set on the LPGA's first win of 2022 with a one-stroke 54-hole lead, but a second consecutive round in chilly and rainy conditions didn't work to the Floridian's advantage.

With the temperature at Lake Nona hovering around 50 degrees, the world No. 1 shot a closing 3-over 75, dropping her to T-4 on the same course in which she notched her first of four LPGA wins last year at the Gainbridge LPGA.

"I was freezing," she said Sunday afternoon. "I always get colder than it actually is. I've always said that. That's why I stay away from tournaments that are always in the cold, because I struggle so much in it. I don't know why. I feel so stiff. Something I just need to suck up and mentally trick myself. But, yeah, I struggle in the cold."

California native Danielle Kang, who overtook Korda for the win with a final-round 68, had always struggled in the cold throughout her career. But during the offseason, she would wake up early at her Las Vegas home to practice in the cold wind while wearing multiple layers that wouldn’t hinder her swing.

"I shot 4 under in the cold today and 3 under yesterday," Kang said after notching her sixth LPGA win. "Probably the best I've ever played in the cold and I'm proud of myself for that."

Korda may want to follow Kang's training method. But with a long season ahead and the next two events in South Florida, before she takes a two-month break, the 23-year-old isn't dwelling on her Sunday finish.

"It's my first round this year, or first tournament this year and I finished in the top 5, so at least I can take that away," Korda said. "I chipped it well and hit some pretty good shots here and there, so I'm going to take that way from it. I was in the final group again on Sunday, so I'm going to try to learn from that again." 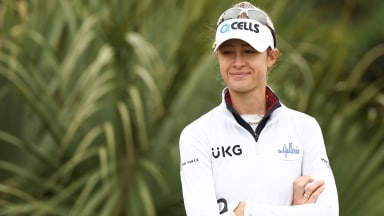 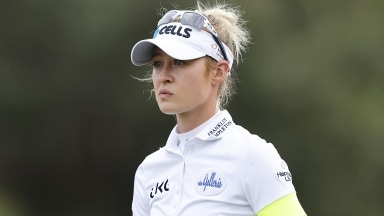