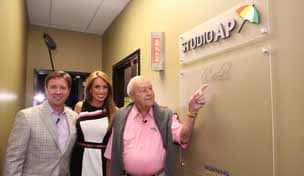 We all remember our first girlfriend, office, and, most importantly, home. When the network executives conceived Morning Drive back in 2010, the initial premise was for the studio to be a man cave containing a show whose format was styled after a radio broadcast. I was fortunate to be one of the original hosts hired and was thrilled to be in the chair when we lit the lamp on Morning Drive on January 3, 2011.

This coming Monday, February 4, the show moves into its new residence, Studio AP, named after one of the founders of Golf Channel, Mr. Arnold Palmer. The level of humility felt by those of us who are associated with the program is profound, not only due to the name on the door but because of the value of the real estate, literally and figuratively.

I never lose sight of the unique opportunity two live hours of morning television affords me to discuss all that is the game of golf. The game is an afternoon television enterprise and yet with the show’s new schedule we get to walk to the proverbial tee first thing every day of the week. Morning Drive has been able to gather traction as a result of acceptance by the industry and best players in the world, but owes most of its success to support from the people who love the game most, the viewers. I tell our staff that we get to work in the toy department of life, and that our new home gives us all the bells and whistles a studio could possibly offer. When the red light comes on next Monday at 7AM ET in Studio AP, it will be our first party in the new home and you're all invited.