With Genesis title, Adam Scott proves, even at 39, that he's not slowing down 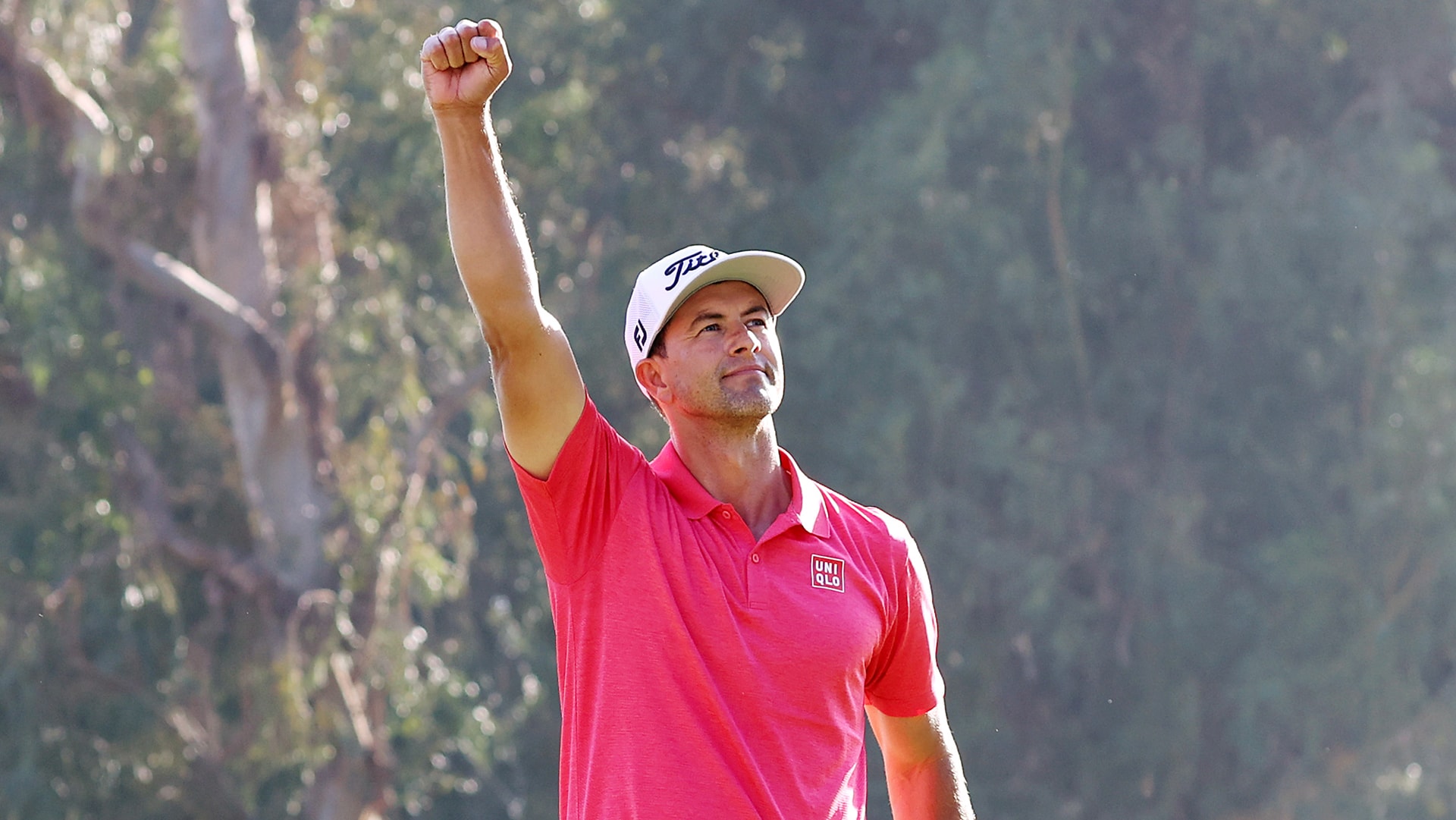 LOS ANGELES – Last month, John Limanti decided to attend the PGA Show for the first time. While strolling the Orange County Convention Center he bumped into Phil Scott, who was at one of the booths practicing – what else? – his sidesaddle putting. They chatted briefly about Adam Scott – Phil’s son, Limanti’s PGA Tour player boss – and settled on the same conclusion.

“I think this is going to be the best year of his career,” Limanti said.

Hungry. That’s not an adjective often used to describe Adam Scott, the handsome Australian with the picture-perfect swing for whom golf and life seem enviously easy. But on the verge of turning 40, there’s a renewed urgency about Scott, a need to deliver while he’s still fit and healthy, and he’s worked harder in the past year and a half than he ever has, remaining not just a world-class talent but a more well-rounded threat.

Scott’s complete skillset was on display Sunday during a gritty final-round performance at the Genesis Invitational, where he managed an increasingly fiery Riviera better than any of the dozen or so contenders – even the world No. 1, Rory McIlroy. Typically proficient with his driver and irons, Scott made a number of crucial putts with his broomstick putter (nicknamed “The Weapon”) and even pulled off a gutsy flop shot with the tournament on the line. His 10-foot birdie putt on the 71st hole gave him a two-shot cushion that he’d carry to the finish line, winning at 11-under 273.

Coming off the best statistical season of his career, Scott has now won in back-to-back starts, rising to No. 7 in the world ranking – the first time he’s cracked the top 10 in nearly three years.

“Even before winning this week, I feel like physically and somewhat mentally I’m OK after 20 years out here,” Scott said. “I really do believe, if I can maintain motivation and focus, the next five years can be my best years on Tour.”

Heady stuff, especially considering he’s a Masters champion, a 14-time Tour winner and only recently, in December at the Australian PGA, was able to snap a four-year winless drought.

After all, it wasn’t long ago that Scott was playing the minimum number of Tour events, his world ranking plummeting into the 70s, requiring him to qualify the hard way for the U.S. Open. His anchored putting method was banned. His motivation waned with a wife and young kids.

“There were lots of changes in my life, and I was pushing myself very hard on the golf course, probably in the wrong direction a little bit, and just having that battle like you get in a bit of a funk and you’re still expecting to be a great player and win tournaments,” Scott said. “I realized you really need to have things lined up and things going your way to give yourself a chance to win out here.”

Scott rededicated himself to his craft, linking up again with longtime swing coach (and brother-in-law) Brad Malone and hiring Limanti to loop. In the summer of 2018, Scott finished third at the PGA, a major moment that once again pushed him to maximize his immense gifts.

“Because he’s such a cool customer out here, he’s so even-keeled, everyone thinks that just because you have the most beautiful swing in the world that you can just show up and win tournaments,” Limanti said. “I mean, it is beautiful, but he grooves it. He gets after it. He works really, really hard.”

Addressing Scott’s short game was a point of emphasis, and over time Scott has turned it from a liability into a strength. About 18 months ago Scott was messing around by the practice area, hitting wild shots from different angles and stances, when Malone said, “As silly as that might feel, it actually looks like it’s in a really good position to hit shots from.”

“It’s not very technical at all,” Scott said. “It’s just a feeling in my right arm.” Ranked 157th on Tour around the greens a few years ago, he was a career-best 10th last season.

That added creativity was apparent Sunday, on a day when all of the contenders were just trying to limit their mistakes. After making a double bogey on the fifth hole, Scott poured in a 20-footer a hole later to regain a tie for the lead. He made six consecutive pars – none bigger than his 10-foot save on 12 – before brushing in a 12-footer for birdie on 13.

Leading by two, Scott dumped his approach shot on 15 into a plugged lie in the greenside bunker. After knifing his wedge shot over the green, he faced a delicate 15-yarder that he needed to get up-and-down to salvage bogey.

“I thought, Well, you can maybe win the tournament if you hit a great flop shot here, so I might as well go for it,” Scott said. And he pulled it off, converting the 4-footer for bogey to stay one clear. When he sank a 10-footer for birdie on 17, he could take a two-shot cushion to the final hole.

For a player with such an aesthetically pleasing swing, there’s little to admire about Scott’s putting method. He keeps the flagstick in the hole. He uses AimPoint Express and a 47-inch putter. He’s clearly more comfortable the farther he gets from the cup. But the results are undeniably improving: He holed five putts longer than 10 feet Sunday, building on last season’s stats in which he ranked 31st on the greens.

“The putting has always been something that’s temperamental with me, certainly mentally, but I think I’ve found what works well for me,” he said.

Added Limanti: “Once he gets the read, I tell him: ‘Dude, trust your feet. You’re the best green-reader out here.’ And he really is. He’s spot-on.”

Scott has been constantly reminded that he’s turning 40 this summer – an insinuation, perhaps, that this is the beginning of the end. But there’s no signs of him slowing down. In fact, he’s only getting better, more complete, more motivated to take advantage of the prime years he has left.

Harold Varner III had a bit of deja vú Sunday at the Genesis Invitational after chunking his tee shot at the par-4 10th at Riviera.