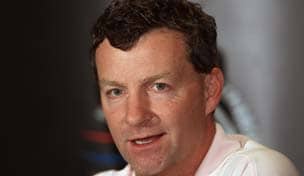 The unlikely partnership of course architect Gil Hanse and billionaire Donald Trump may simply be a case of opposites attracting.

But they clearly have different views of how to renovate the par-3 15th hole at Doral.

In a press conference in Miami on Tuesday, Trump outlined plans for a major renovation at the TPC Blue Monster. One of the most notable changes was his idea to turn the 15th into an island green.

“Donald is persistent. He has an idea that he thinks is good and he keeps coming back to it and coming back to it,” Hanse said Thursday on “Morning Drive.” “But so far we’ve resisted the temptation.

“We have a fantastic iconic island green coming up in two months on Tour,” he said, referring to the 17th at TPC Sawgrass, “and we don’t want to be the precursor to that. We want Doral to have its own feel.

“As far as I know (original course architect) Dick Wilson never built an island, so while we’re going off the reservation on a number of changes, we’re hoping stylistically it’ll still have the appearance of a classic Wilson course. And an island green doesn’t really go into that.”

That said, Hanse described the 15th as a “nondescript hole” that “doesn’t incite enthusiasm or excitement.” He hopes that’ll change by adding a new peninsula green that will bring water into play and create better vistas for spectators.