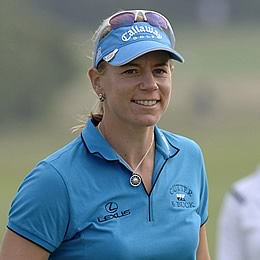 Marking 10 years to the day of the historic moment when Annika Sorenstam hit one of the most famous tee shots ever and became the first woman in modern history to test her mettle among men in a PGA TOUR event, Golf Channel will air a definitive retrospection of that slice of history in Go Annika, airing Wednesday, May 22, at 9 p.m. ET.

Golf Channel producers have compiled more than 20 interviews to tell the story that surrounded the Crowne Plaza Invitational at Colonial (then titled Bank of America Colonial) that year, including exclusive access to Sorenstam and the people closest to her.  The 30-minute documentary will detail how and why the World Golf Hall-of-Famer and the best female golfer of her generation came to play in the tournament and reveal for the first time her words about how being under such an intense microscope then changed her outlook about her career and life forever.

“Facing some of the fiercest scrutiny any golfer has ever encountered, Annika embraced the moment like we’ve always known her to do – with dignity, grace and a competitor’s spirit,” said Golf Channel Executive Producer Molly Solomon.  “We remain in awe of all her extraordinary accomplishments and are thrilled that she has allowed our cameras to document the 10th anniversary of that occasion at Colonial.”

Viewers will be treated to previously unknown stories related to Sorenstam’s feat, including rare reminiscences from her caddie Terry McNamara and agent Mark Steinberg.  “I was just sitting off to the side probably typing an email and not really too focused on what the answer would be because I probably could’ve predicted what the answer would’ve been. But I was wrong. And I remember stopping in my tracks when I heard her say, ‘Yeah I would do that,’” said Steinberg, recalling the press conference when Sorenstam was asked if she would ever consider playing in a PGA TOUR event.

The documentary includes a surprise meeting at Colonial Country Club between Sorenstam and her playing partners on that Friday in 2003 – then PGA TOUR rookies Aaron Barber and Dean Wilson – who recounted what the atmosphere was like walking 18 holes with Sorenstam.  The three had not talked about their shared adventure since that historic day.  Additional interviews include David Feherty, who worked that day for CBS; Sorenstam’s parents; Bank of America Colonial Tournament Chairman Dee Finley; and PGA TOUR pros who played in the tournament, including Fred Funk, Kenny Perry, Mark Calcavecchia, Jim Furyk and Luke Donald.

The documentary also recounts the side-show moments of the week, including the protests by PGA TOUR veterans Vijay Singh and Nick Price, and the fans, who dressed in costumes, held signs and wore slogan buttons.

Annika Sorenstam is a regular contributor to Morning Drive on Golf Channel.